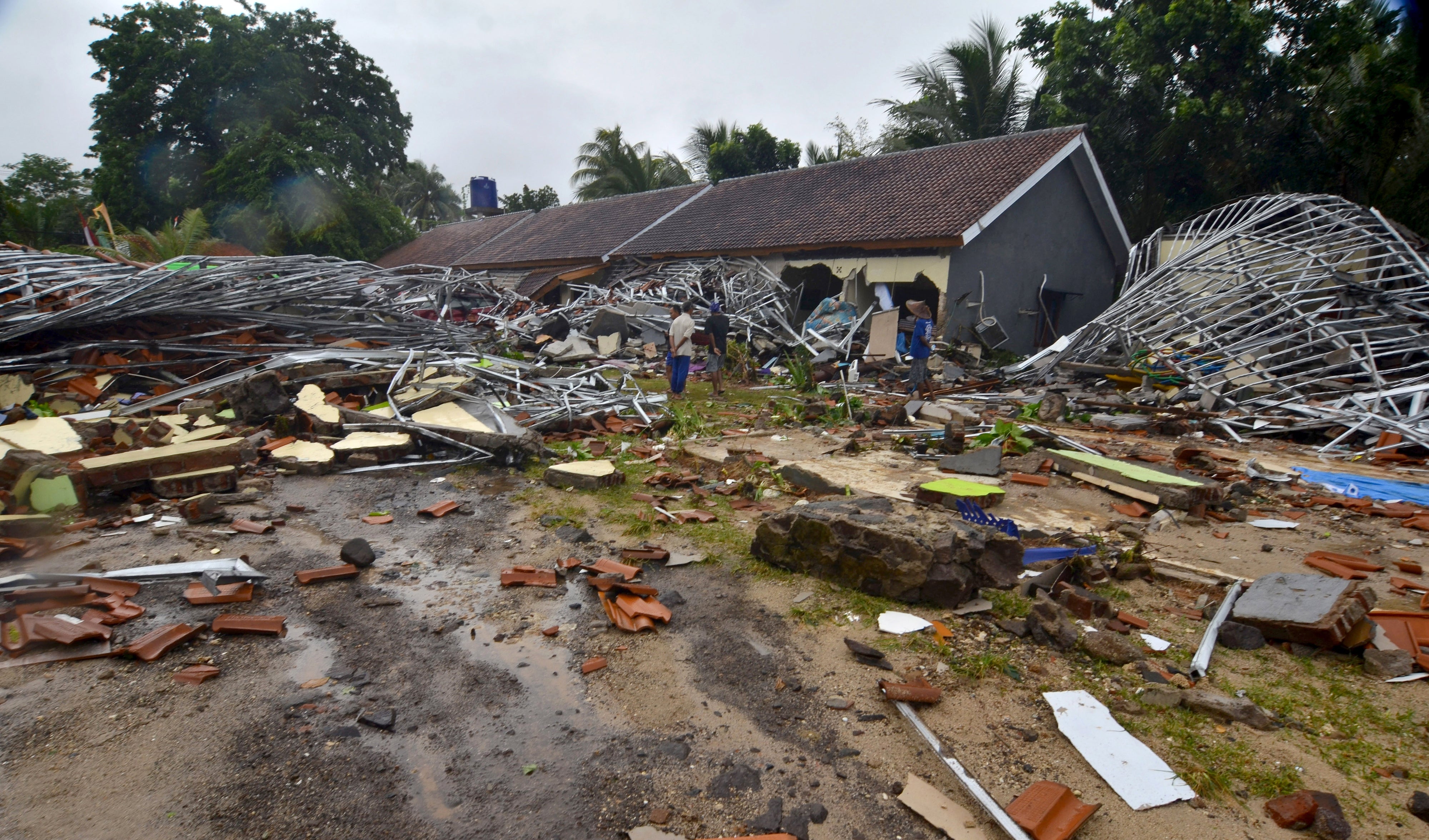 Residents inspect their damaged homes in Carita on December 23, 2018, after the area was hit by a tsunami on December 22 following an eruption of the Anak Krakatoa volcano. – A tsunami following a volcanic eruption killed 62 people and injured hundreds more as it slammed without warning into tourist beaches and coastal areas around Indonesia’s Sunda Strait on the night of December 22, sending panicked holidaymakers and residents fleeing. (Photo by Ronald / AFP)

JAKARTA — A tsunami that struck on Saturday engulfed hundreds of tourists watching a performance in Tanjung Lesung, in Pandeglang, Banten, a survivor said Sunday.

“We saw hundreds of people who were watching a music event disappear under the wave,” Nono, a tourist from Bekasi, West Java, said as quoted by Antara news agency on Sunday.

The Meteorology, Climatology and Geophysics Agency (BMKG) first said the event was not a tsunami but a high tidal wave. Later they rectified their statement and confirmed that at 9:17 p.m. a tsunami hit coastal areas of Banten and Lampung provinces. The latest death toll according to the National Disaster Mitigation Agency (BNPB) as of Sunday at 10 a.m. was 62 fatalities, 584 injured, and 20 missing.

Among the tourists on the beach were employees of state utility company PLN and civil servants from the Youth and Sports Ministry. They were gathered around a stage watching a performance of dangdut music, he said.

Witnesses and viral videos revealed that when the tsunami struck, pop band Seventeen was playing on stage. At the time of writing it is still not clear whether there was more than one stage along the coastal area in Banten that night.

Nono said he and his family were in a musholla (prayer room) at 9:20 p.m. Jakarta time when he heard a loud rumble and people outside screaming for help. The family got out to save themselves. Nono said he was struck by the waves too, while his 10-year-old son, Alif, found himself thrown some meters away from his original location.

His wife and other child ran toward a hill and neither were injured. Nono and Alif were wounded and the nearby community health center sewed their wounds, he said as quoted by Antara.

Sariman, a Tanjung Lesung resident, said he and his child were hit by the tsunami. He said the waves reached seven meters and he received serious wounds all over his body.

The BMKG said in a statement Saturday that the highest wave they detected was 0.9 meters on Jambu Beach, Bulakan village, Cinangka district, Serang regency, Banten. Rachmat Triyono, the head of the tsunami and earthquake division at the BMKG, said as quoted by tempo.co that the tsunami, coupled with high tide, resulted in waves as high as 3 meters.