13 dead after fire hits black coal mine in Czech Republic 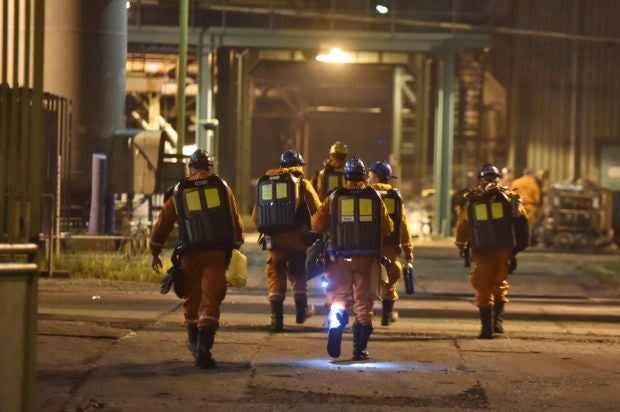 A rescue team is pictured at the CSM coal mime in Karvina, Czech Republic, Tursday, Dec. 20, 2018. The death toll in a methane explosion that hit the coal mine in northeast Czech Republic increased to 13, a mining company said Friday. (Jaroslav Ozana/CTK via AP)

PRAGUE, Czech Republic – Thirteen miners died and 10 were injured after a fire caused by burning methane erupted in a black coal mine in the east of the Czech Republic, a spokesman said Friday.

“In total we have 13 dead miners, 11 Polish and two Czech,” Ivo Celechovsky, spokesman for the OKD mining company, told AFP.

The accident occurred at a depth of 880 meters at the CSM mine in the city of Karvina, about 300 kilometers (200 miles) east of Prague, on Thursday afternoon.

Rescuers found five dead miners on Thursday and reported eight missing. All of them were also found dead.

Celechovsky said the fire was still burning, with rescuers building barriers to stop it from spreading.

He added they would work there at least until Sunday.

Nada Chattova, a spokeswoman for the hospital in the nearby city of Ostrava, said two men had been treated at its burn center.

“One was brought in by a helicopter; he is still in a critical condition. The other one is in a stable condition and his life is not in danger,” she told AFP.

One miner with a lighter injury was taken to a hospital in Karvina and seven were treated on the spot, also with lighter injuries, Czech media said.

“The blast at the CSM mine is a huge tragedy,” tweeted Czech Prime Minister Andrej Babis, who will travel to the site on Friday morning along with his Polish counterpart Mateusz Morawiecki.

The prime ministers talked on the phone after the accident, Morawiecki said in a tweet, adding that Polish rescuers had also been sent to the mine.

“I was supposed to be there, I work with these teams every day. They sent me to work somewhere else today,” said a Polish miner.

OKD, which runs the mine, is controlled by the Czech state and expects to extract about five million tons of coal this year.

The accident is the most serious one at a Czech mine since 1990 when 30 miners died following methane combustion at another mine in Karvina. /kga

Read Next
Secure your social media accounts for the holidays, PNP says
EDITORS' PICK
LGUs must issue fare matrix to allow tricycles to operate — DILG
Cherry Mobile teams up with Cloud Panda PH, launches online store
COOCAA TV Bounce Back Sale offers up to 50% off
Employers may monitor staff in work-from-home setup — NPC
Smart launches new LTE-Advanced Pocket WiFi Plans starting at P699 per month
Philippines’ COVID-19 cases surge to 20,626, deaths near 1,000-mark
MOST READ
Lacson to Duque: ‘Just go’
‘Ang Probinsyano,’ other ABS-CBN programs to return as new channel set to emerge
Duterte lambasts Trillanes anew: ‘You did nothing but glorify yourself’
Philippines’ COVID-19 cases surge to 20,626, deaths near 1,000-mark
Don't miss out on the latest news and information.