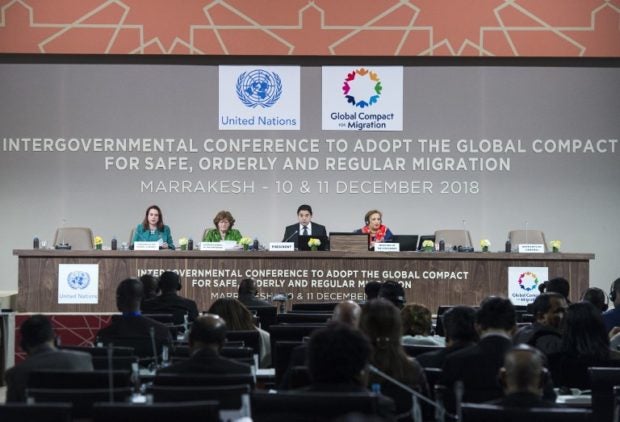 UNITED NATIONS — The U.N. General Assembly endorsed a sweeping accord to ensure safe and orderly migration Wednesday over opposition from five countries, including the United States and Hungary.

The Global Compact for Migration, the first international document dealing with the issue, is not legally binding. But the escalating debate over people leaving their home countries for new ones has sparked increasing opposition and reservations among the U.N.’s 193 member states.

The General Assembly resolution endorsing the compact was approved by a vote of 152-5, with Israel, the Czech Republic and Poland also voting “no” and 12 countries abstaining. The vote in favor of the resolution was lower than the 164 countries that approved the agreement by acclamation at a conference in Marrakech, Morocco, earlier this month.

The compact represents a U.N.-led effort to give migrants seeking economic opportunity a chance to find it and to have authorities crack down on the often dangerous and illegal movements of people across borders that have turned human smuggling into a worldwide industry.

U.N. Secretary-General Antonio Guterres welcomed the resolution’s adoption, saying the compact provides a platform for international cooperation that points the way “toward humane and sensible action to benefit countries of origin, transit and destination as well as migrants themselves.”

“It calls for greater solidarity with migrants in situations of appalling vulnerability and abuse,” the U.N. chief said. “And it highlights the imperative of devising more legal pathways for migration, which would also help to crack down on trafficking and exploitation.”

According to a U.N. estimate, there are 250 million migrants around the world, or 3.4 percent of the global population. A McKinsey study cited earlier this year by Guterres said they “contribute 10 percent of global gross domestic product.”

The compact says that “the majority of migrants around the world today travel, live and work in a safe, orderly and regular manner.” But Guterres told the Marrakech conference that “more than 60,000 migrants have died on the move since the year 2000” and called the loss of lives “a source of collective shame.”

The secretary-general and other supporters of the compact contend that migrants contribute to the world economy, including by providing needed workers in aging rich countries and returning cash to poorer home countries through remittances.

The United States and other opponents argue that the compact is attempting to “globalize” how migration is carried out at the expense of the sovereignty of individual countries, and is trying to make new international law. Supporters counter that the compact is non-binding and every country remains sovereign and in charge of its borders and migration policy.

The 34-page compact addresses all aspects of migration — why people leave their home countries, how to protect them, integrate them and cooperate in returning them home safely. Its principles include recognizing the sovereignty of nations and reaffirming that migrants have the same human rights as all other people that “must be respected, protected and fulfilled at all times.”

The compact has 23 objectives “for safe, orderly and regular migration” that seek to boost cooperation in managing legal migration and discourage illegal border crossings. These range from technical issues like collecting data, ensuring migrants have proof of their legal identity, and promoting faster and safer transfer home of earnings by migrant workers, to such matters as preventing and eradicating trafficking, providing access to basic services for migrants, and using migration detention “only as a measure of last resort.”

Before the vote, General Assembly President Maria Fernanda Espinosa called the compact “a historic opportunity to cooperate, exchange good practices and learn from each other so that migration, a phenomenon that has marked the history of humanity, benefits all of us.”

“Who can be against guidelines that strengthen the fight against migrant trafficking and human trafficking?,” she asked, stressing that “no state, as powerful as it may be, is able to resolve alone the challenges of international migration.”

By contrast, Hungary’s Foreign Minister Peter Szijjarto, whose country’s right-wing Prime Minister Viktor Orban is vehemently opposed to migration, warned the assembly that approving the “unbalanced, biased and extremely pro-migration” compact would be “a serious mistake.”

“This document describes migration as if it would be the best thing what (cq) has ever happened to humanity,” he said. “But this is not true. Migration is a dangerous phenomenon” that has destabilized countries of origin and transit and “put enormous security risk on countries of destination.”

Szijjarto said Hungary is also concerned “that this document will contribute to launch new massive migratory flows all around the world, which will put enormous risk around the globe.”

The assembly chamber remained silent after Szijjarto’s speech but after Philippines Foreign Secretary Teodoro Locsin Jr. spoke out in strong support of the compact, diplomats burst into loud applause.

Locsin stressed that “the compact does not derogate one iota from sovereignty, but it reveals sovereignty’s fundamentally moral nature.”

“A key aspect of sovereignty is the care states must take of people inside them, even if they are on the move from countries of origin through countries of transit to where they finally end up to be welcomed or booted out,” he said.

Locsin said the compact “merely speaks truth to sovereign power and reminds it of its moral aspect.” And it mildly suggests “what might be done out of decency about the problems encountered by migrants. It does not tell states what to do,” he said.

Locsin said that “Western countries would be cesspools without migrants.”

“Migrants are not slaves in transport, but free human beings on the move, with more courage to improve their condition aboard, than … to persist in the wretched places they must flee or perish,” Locsin said. “Sometimes the needs of state and migrants overlap, sometimes not.”

The drafting process for the global compact was launched after all 193 U.N. member states, including the United States under President Barack Obama, adopted a declaration in 2016 saying no country can manage international migration on its own and agreed to work on a pact.

But the United States under President Donald Trump pulled out a year ago, claiming that numerous provisions in the compact were “inconsistent with U.S. immigration and refugee policies.”

After lengthy negotiations on the often contentious migration issue, 192 countries unanimously agreed on the 34-page compact in July — every member of the U.N. General Assembly except the United States, which boycotted the meeting.

But in recent months, opposition to the compact has grown, reflected in the lower number of countries approving the compact in Marrakech and voting “yes” on Wednesday.

U.S. Deputy Assistant Secretary of State Andrew Veprek reiterated U.S. opposition, telling the assembly Wednesday that the United States honors the contributions of immigrants who helped build the country, but “we cannot support a compact or process that imposes, or has the potential to impose, international guidelines, standards, expectations or commitments” that might constrain government decisions, especially on security of borders and who to admit.