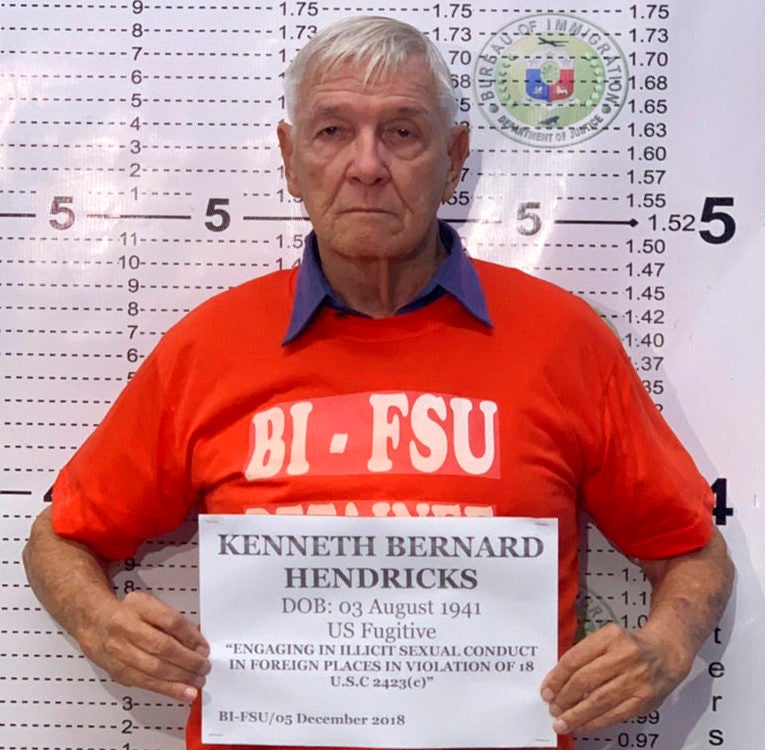 When the boy turned 7 in 2013, the priest started molesting him, together with the boy’s older brother, according to documents shown exclusively to the Inquirer.

J.V.A (the boy’s alias in the criminal complaint) — who is now 12 — is at the heart of the child molestation case being built by Philippine and American officials who want to put the 77-year-old priest behind bars, if possible for the rest of his life.

Authorities describe the former Franciscan missionary from Cincinatti, Ohio, as a serial sexual predator who preyed on young boys under his care, mostly altar boys who served and lived with him at St. Isidore the Worker Chapel at Talustosan, where Hendricks was the priest in charge.

Talustosan is a remote village some 4 kilometers from this coastal town with a population of 55,000.

“This is potentially an explosive international case involving both the Philippine and American Catholic Church hierarchy,” said a top police official here who was directly involved in the investigation.

“Just imagine a foreign priest, an American at that, hiding in a Third World country and abusing its poor children. The legal implications could be mind-boggling,” the police official said.

But this official is wrong, because Hendricks is not hiding, as also erroneously reported by some news outlets last week.

In fact, Father Pius, as Hendricks is popularly known here, is considered by many to be a pillar of this community where 88 percent of the residents are  Roman Catholics.

“He is a generous benefactor who has done a lot [for] our community,” said Dr. Joyce Caneja, 47, chief of the Biliran Provincial Hospital, where Hendricks was brought for a routine medical checkup after his arrest on Dec. 5 at the OLHR parish office by a joint task force of agents from the Philippine Bureau of Immigration and the US Department of Homeland Security.

“He built our cemetery, our hospital’s chapel. He paid for the education of so many young men and women here,” Caneja added.

But investigators on the Women and Children Protection (WCP) desk of the Naval police station paint a different picture of Hendricks, who allegedly gifted his victims with clothes and shoes while bribing their parents to look the other way.

Investigators in Ohio also are looking at Hendricks’ banking records for the possibility that he misused some of the funds he had solicited in the United States to pay off and silence his victims.

Philippine and American law enforcement officers have started piecing together a criminal case against Hendricks.

He has been charged in Ohio with a federal crime as an American citizen engaging in illicit sexual acts in a foreign country.

He could also be prosecuted under Philippine law for violating Republic Act No. 7610, the Anti-Child Abuse Act.

The Diocese of Naval has tried to put a lid on the growing scandal, issuing a one-paragraph statement on the case, claiming that the diocese had formed a commission to investigate the allegations against Hendricks.

Hendricks is the only foreigner among the 26 priests working for the diocese. He was ordained in 1996 under Bishop Filomeno Bactol who, in 1988, became the first bishop of Naval.

He was replaced by Bishop Rex Ramirez, a close confidant of Archbishop John F. Du of the Archdiocese of Palo.

It was under Bactol’s administration that most of the alleged molestations took place.

The Catholic Bishops’ Conference of the Philippines (CBCP) has yet to issue a statement on the matter.

But the CBCP has protocols in place when allegations of sexual misconduct by clergy are reported.

This writer visited Ramirez on Dec. 14, but the new bishop of Naval refused to comment, saying he would wait for the commission’s report.

Revered by many of his parishioners and reviled by a few, Hendricks and his case could reveal if he is really a closeted pedophile or a pious pastor wrongly accused by his alleged detractors.

Before Hendricks was flown to Manila to be held temporarily in an immigration cell in Bicutan, Caneja and her staff took his blood pressure.