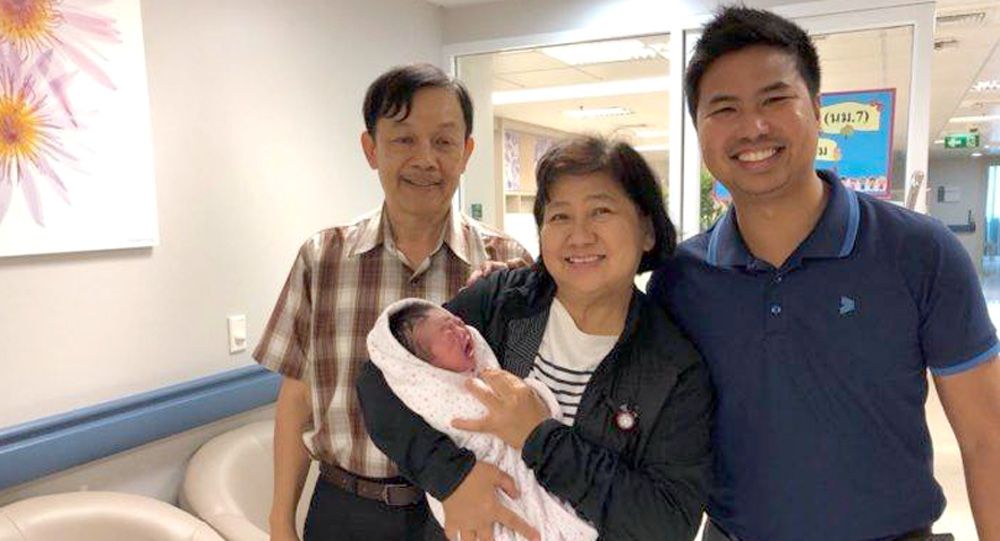 Photo from THE NATION

Thirty-one years ago, Pavornvit “Mung Ming” Srisahaburi, was conceived outside his mother’s womb in a lab in Chulalongkorn Hospital. Today, he is an engineer and a father.

“My wife and my son are perfectly healthy,” he told reporters at a press conference at Chulalongkorn University yesterday. Pavornvit’s son “Delta” was conceived naturally and delivered naturally on Sunday.

This confirms that people conceived with the help of assisted reproductive technology through in-vitro fertilization (IVF) are healthy and fertile, and the technique is “quite safe”, Chulalongkorn’s fertility specialist Assoc Professor Kamthorn Pruksananonda said.

Dr Kamthorn was part of Professor Pramuan Virutamasen’s team that conducted IVF for Pavornvit’s mother 31 years ago. According to Pramuan, decades ago many questions were raised regarding the morality of the procedure and the safety of the baby, as it required that the egg be fertilized by sperm outside of the body and then later put back into the mother’s uterus.

Today, it has become a common medical practice with 7 million babies born via IVF across the world. Of them, about 20,000 were born to Thai parents, Kamthorn said. The infertility specialist pointed noted that assisted reproductive techniques like IVF and oocyte cryopreservation – where eggs, sperm or embryos are frozen for later use – have additional uses beyond treatment for infertile couples.

Oocyte cryopreservation or egg freezing is a versatile fertility preservation option. It also allows cancer patients to preserve their eggs, sperm or embryos before undergoing chemotherapy or radiation therapy, which often causes infertility.

Having a bunch of healthy eggs at hand for future IVF allows cancer survivors the chance to have a healthy baby, Kamthorn added.

It allows a woman to preserve her healthiest egg cells, while devoting her prime period of fertility to higher education or career success. This allows a woman to delay childbirth to later years without fear that “old” egg cells may lead to genetic problems, he said.

Big corporations like Facebook, Apple and Google have offered egg-freezing facilities to their women employees as many choose to focus on climbing the career ladder before having a family.

Assoc Professor Wisan Sereepapong, from Chulalongkorn’s Department of Obstetrics and Gynaecology, added that these technologies can ease the pressure from a woman’s ageing crisis as well. Most Thai women now get married much later compared to previous generations, resulting in problems with conception and healthy pregnancy.

Thailand’s Total Fertility Rate (TFR) is merely 1.5, the second lowest in the region after Singapore and much lower than the 2.1 replacement rate recommended by the World Bank and World Health Organization, he said.

Technology and morality must be in balance, said Professor Suttipong Wacharasindhu, dean of Chulalongkorn University’s Faculty of Medicine and a Chulalongkorn Hospital director.

Without good guidelines, assisted reproductive technologies may be used for ill purposes such as non-medical sex selection, commercial donation and surrogacy, Dr Suttipong said.In recent years, a wealthy Japanese man commissioned as many as 13 children from multiple Thai surrogate mothers, claiming that he wanted them to inherit his fortune.