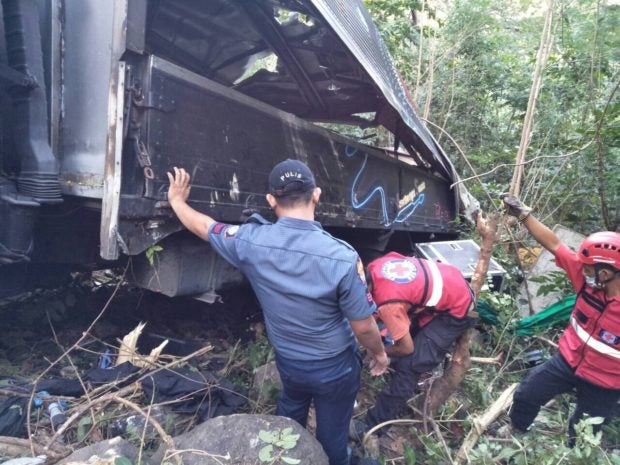 A truck fell off a cliff and killed two persons and injured 11 others in Nasugbu town, Batangas on Wednesday morning. Photo by Batangas PNP

SAN PEDRO CITY – Two men were killed while at least 11 others were injured after a truck fell off a cliff in Nasugbu, Batangas on Wednesday morning.

A report from the Batangas police office identified the fatalities as Steven Mendoza and Earl Bonan, sound system operators employed by the J.S. Mina Sound System.

The police said the truck, an Isuzu closed van carrying sound system equipment, was traversing the national road in Barangay Natipuan when it fell off a cliff as it approached a sharp curve, around 6 a.m.

Police said there were 13 people on board including the driver, Rodrigo Gonzales, 58, from General Mariano Alvarez, Cavite.

Responders rescued Gonzales and the other helpers but Mendoza and Bonan were pinned under the vehicle. It took them a while before the bodies were retrieved. MARICAR CINCO 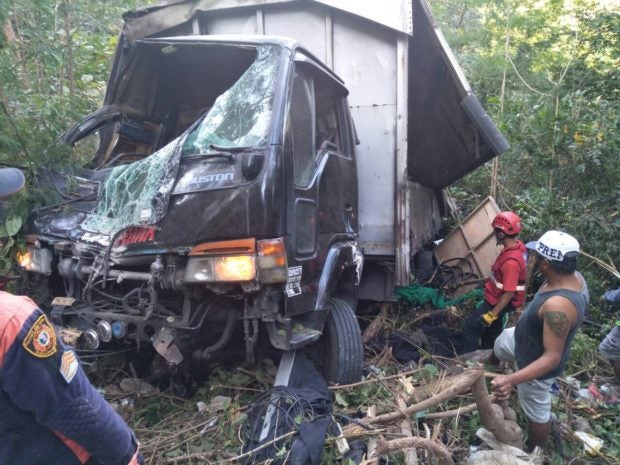 A truck fell off a cliff and killed two persons and injured 11 others in Nasugbu town, Batangas on Wednesday morning. Photo by Batangas PNP