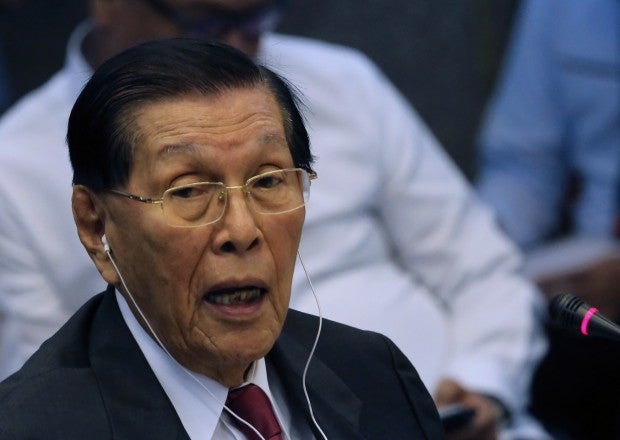 Senator Juan Ponce Enrile during the committee hearing on the Mamasapano encounter where 44 PNP SAF were killed.
INQUIRER PHOTO/RAFFY LERMA

MANILA, Philippines — Former Senate President Juan Ponce Enrile criticized the current practice in the Senate where he said legislative measures were discussed in a “coffee table” without any debate.

This was one of the reasons cited by the former senator as to why he was seeking a comeback in the Senate in 2019.

READ: Enrile wants to join the fun, announces bid for Senate in 2019

“Out there in the Senate, where I stayed for 24 years, when I was there, nothing is passed without any debate. Unlike today, they go into a coffee table and they discuss it among themselves and that’s it. That’s not a Senate,” Enrile said in a statement on Tuesday.

“That’s not a deliberative assembly of the people’s representatives. A democracy must be open where issues are subject to intellectual dissection,” he added.

To stir up open and public discussion of bills and resolutions filed in the Senate, Enrile said that issues of national interest be made transparent to the general public.

“Nothing is hidden to make the people understand because the people are the ones that will suffer if the representatives make mistakes in their understanding and decisions of any matter that affects them,” he said.

“That, in essence, is the history of my involvement in politics today,” he added.

According to the former senator, he decided to run for the Senate in the upcoming midterm elections in 2019 as he saw the need for the Senate floor to become a “forum” to “drumbeat” all important local and national issues that will affect the country and the world.

“I can talk on a corner but who cares to listen to an old man?” he said.

“So, I said, here is an opportunity for me that is looming in front of my face that I could take in order to bring some of these things to the knowledge of the people,” he added. /cbb