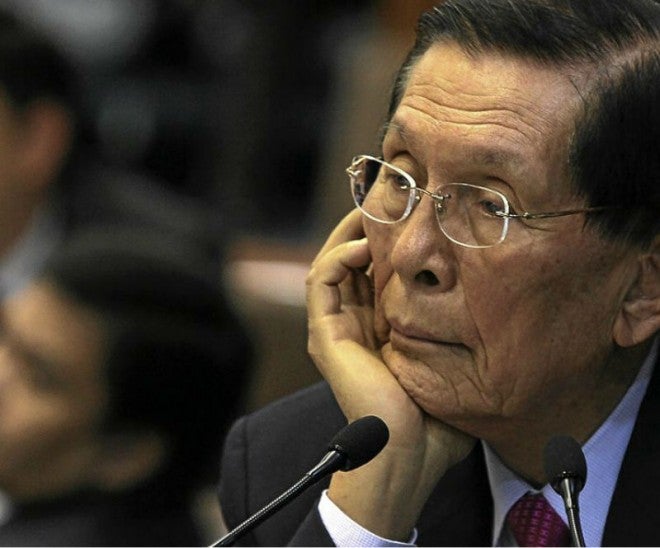 Former Senate President Juan Ponce Enrile will “join the fun” by running for senator in the 2019 midterm elections.

“I want to join the fun,” the 94-year-old Enrile told INQUIRER.net in an interview over the phone on Tuesday.

“I’m filing my certificate of candidacy for the Senate this afternoon,” he said, adding that he would run as independent.

Enrile said he would send his representatives to file his COC at the Commission on Elections this Tuesday afternoon.

He explained that he does not have to be physically present to file his COC, saying in jest, “I think I’m notorious enough.”

Enrile also believes that his age would not be a hindrance for him to be able to return to the Senate.

“I’m [94] (years old) but you know, you don’t need a wrestler in the Senate. You need somebody who understands the problems and the solutions (of the country),” he said.

While Enrile acknowledged having problems with blood pressure, weak hearing and weak vision because of his age, he still asserted: “I think my brain is still up to it.”

He said he would use “modern technology,” specifically social media, to campaign in the 2019 senatorial race. He said he has a Facebook account.

“Maybe I will go out once in a while,” Enrile said.

Asked what made him decide to join the fray for a seat in the Senate next year, Enrile pointed to his musings in the last three years, when he said he has been quietly studying the issues and problems confronting the country.

“So I decided that perhaps I can contribute in bringing these issues before the people so that they will understand what is going to happen in their future and to anticipate the problems that are coming up,” he said. /kga/ac