Senate, House clash over fate of Road Board 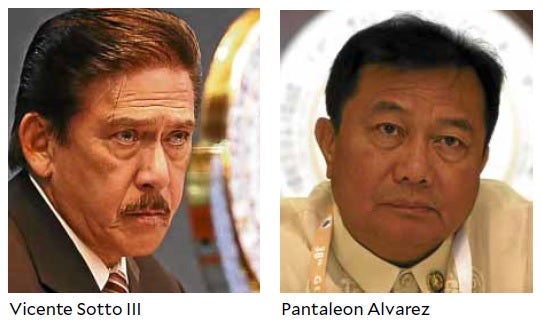 The Senate and the House of Representatives appear headed for a showdown in deciding the fate of the graft-tainted Road Board amid allegations that the road user’s tax is P45 billion in pork.

“As far as we are concerned, it’s abolished,” Senate President Vicente Sotto III said when asked about the Senate’s position on a bill that was supposed to abolish the board, which controls proceeds of the tax known as the motor vehicle user’s charge (MVUC).

Sen. Panfilo Lacson, who blew the whistle on various ways lawmakers were inserting pork in the P3.8-trillion proposed budget for 2019, said the Senate would “insist” on the agency’s abolition.

“We will insist. In fact, we had to adopt the House version of the bill abolishing the Road Board even if we did not totally agree to their version when we found out that they wanted to withdraw what they already had transmitted,” Lacson told reporters in a text message.

Lacson said the senators’ reason was simple: The Road Board is a big source of corruption.

“Disbursements of tens of billions of pesos are subject to abuse of discretion with very little or no oversight,” he added.

In September, the Senate, hoping to dispense with bicameral discussions, passed and adopted the House version of a bill filed by former Speaker Pantaleon Alvarez abolishing the Road Board due to huge irregularities in the use of MVUC.

But the House, under the new Speaker, Gloria Macapagal-Arroyo, rescinded its own approval of the bill, leading to confusion about the measure’s status.

Lacson described the situation as a “double stalemate.”

The Senate and Malacañang, according to Lacson, are in agreement to abolish “since we know that the road user’s tax has always been a source of corruption for the longest time as there is very little or no oversight on the board’s disbursements.”

On Sunday, Alvarez said disagreement over the release of the MVUC triggered the House-led attacks on Budget Secretary Benjamin Diokno over his supposed insertions in the 2019 budget without President Rodrigo Duterte’s consent.

The former Speaker alleged that lawmakers had been conspiring with Road Board officials to extort from handpicked contractors 30 to 40 percent of the total cost of projects.

“This translates to billions of pesos collected from Road Board money,” Alvarez said.

Road project paraphernalia, such as cat-eye reflectors, metal railings and asphalt overlay, would be overpriced by staggering amounts. Then the Road Board, in cahoots with House members in whose districts the projects will be developed, could “collect” from their favored contractor, the former Speaker said.

Senate Minority Leader Franklin Drilon said the House no longer had authority to recall the chamber’s own bill, because the Senate had already adopted it.

“Since [the] Senate already adopted [the] House bill, the House lost jurisdiction over the bill and could no longer validly reconsider its adoption,” he said in a text message.

Drilon said the President should have the last say on whether to abolish the controversial Road Board amid allegations of corruption and misuse of public funds. “The bill should be sent immediately to the President’s desk for his action. We should let the President decide. It is a political decision,” he said in a statement.

Drilon stressed that there was no valid reason for its transmittal to the Office of the President to be delayed any further.

He said the abolition of the Road Board was critical to the government’s fight against corruption, since it “has become a breeding ground for corruption and inefficiency.”

The Commission on Audit over the past years has consistently flagged noncompliance in the use of funds from the MVUC, Drilon noted.

Lacson likened the House rescission of the Road Board abolition bill to the chamber’s insertions in the 2019 spending bill—even though the period of amendments have long passed.

“As what they did to the 2019 national budget, which, in spite of being passed on second reading last Oct. 3, they still managed to maneuver to amend certain provisions and pass another version without first seeking plenary consideration and approval,” he said. “They throw their own rules out of the window like throwing garbage that they have no use.”

He claimed that last-minute pork insertions by the House leaders delayed the transmittal of the spending bill to the Senate, which has yet to approve it.

Pork finances projects chosen by lawmakers and is a source of kickbacks.