Senate President Vicente Sotto III said that Gray’s answer in the Question and Answer (Q & A) portion was “superb” and the way that Gray carried long gown was the “final win.”

“Congratulations, of course. Her answer was superb. I think that, and the outstanding way she carried her gown was the final win. Her personality was there all along,” Sotto said in a statement. 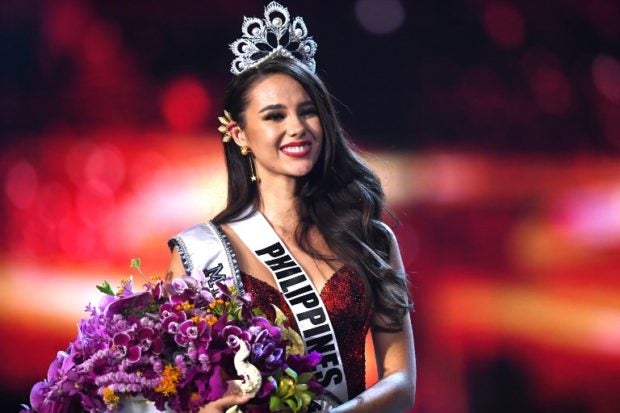 Catriona Gray of the Philippines smiles after being crowned the new Miss Universe 2018 on December 17, 2018 in Bangkok. AFP

Senate Majority Leader Miguel Zubiri meanwhile said that Gray’s answer in the Q & A portion showed that she has “lots of heart” in caring for the underprivileged children in the country.

“You made our country so proud of you and your answer in the final Q & A shows that not only do you have beauty but lots of heart as well in caring for our underprivileged children in the informal settlements in our country,” Zubiri said in a statement, addressing Gray.

Senator Grace Poe said that a woman of style, substance, and brave heart “deserves the crown.”

“A woman of style, substance and brave heart deserves the crown. Thank you for flying the Philippine flag high,” Poe said in a statement, addressing Gray.

A woman of style, substance and brave heart deserves the crown.

Thank you for flying the Philippine flag high.

The Filipinos will be by your side in your Miss Universe journey. #MissUniverse #Philippines pic.twitter.com/gJpZdkEAP0

Senator Joel Villanueva said he hoped that the Gray’s reign as Miss Universe will be a “compelling platform” for positive change and women empowerment, also an “opportunity” to promote the country’s tourism.

“Once again, a Filipina beauty has captured the hearts of the whole universe,” Villanueva said.

“May your reign be a compelling platform for positive change and women empowerment, and also an opportunity to promote our country’s tourism and everything our beloved country has to offer,” he added.

May your reign be a compelling platform for positive change and women empowerment, and also an opportunity to promote our country’s tourism and everything our beloved country has to offer.

In a twitter post, Senator Sherwin Gatchalian said that Gray’s victory will serve as an inspiration to Filipinos.

Also in a Twitter post, Senator JV Ejercito said that Gray’s “slo-mo twirl” in the swimsuit competition “made the difference early on.”

Proud moment again for the Philippines! Congrats @catrionaelisa for bringing home the crown once more!

The slo-mo twirl made the difference early on!

“Congratulations to Miss Philippines, now Miss Universe Catriona Gray! Thank you for showing the world that Filipino beauty is intelligent, creative and full of heart,” Aquino said in a statement.

Senator Sonny Angara also hailed Gray for making the Filipinos proud of her finish, adding that she represents the beauty and intelligence of Filipinas globally.

“We thank Catriona for representing the country well and making us proud with her finish. She represents the beauty and intelligence of Filipinas all over the world and indeed the universe. Mabuhay!,” Angara said.

Senator Cynthia Villar congratulated Gray for “bringing back the crown” to the Philippines after Miss Universe 2015 Pia Wurtzbach’s win.

Congratulations @MissUniverse 2018 @catrionaelisa Gray 💐 Thank you for bringing back the crown to the #Philippines 👑🇵🇭 Mabuhay!

Binay said that being the newly-crowned Miss Universe will amplify Gray’s “true value to want to help the marginalized children and far-flung indigenous communities.”

She added that Gray was proof that “once can rise through adversity” if one believes in herself and displays her abilities and dedication.

Gray was hailed as Miss Universe 2018 during the coronation held at the Impact Arena in Bangkok, Thailand, on Monday.

Gray claimed the country’s fourth Miss U title, following Pia Wurtzbach in 2015, Margie Moran in 1973 and Gloria Diaz in 1969. /je