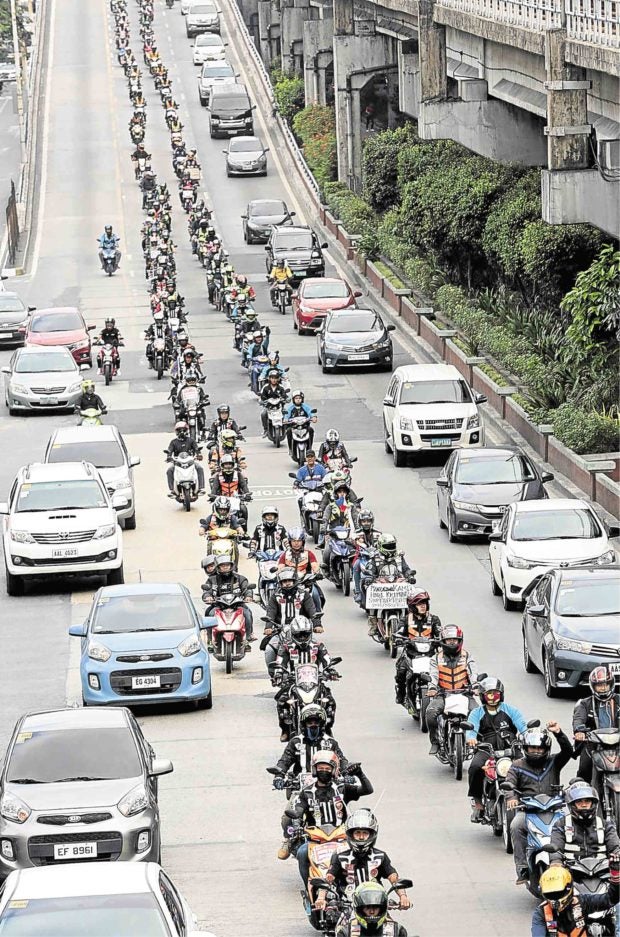 PROTEST PARADE Motorcycle riders come out in full force on Edsa to air their grievances against the government on Sunday morning. —GRIG C. MONTEGRANDE

Two years ago, Ryan Rillera was the branch manager of a well-known fast food joint. Although the salary was adequate, his work took him away from his family.

It was the thought of spending more time with his loved ones that made him decide to trade his crisp white uniform for a light blue safety vest and helmet to become a full-time rider for Angkas, the popular motorcycle-hailing app.

On a good day, he earned around P1,500 to P2,000 as he took harried commuters to their destinations.

However, the intensifying crackdown against Angkas riders — brought on by a recent Land Transportation Franchising and Regulatory Board (LTFRB) resolution ordering their apprehension — has placed Rillera’s main source of income at risk.

“It’s a huge blow to my family and my three kids,” he said. “That’s why we are doing all we can to knock on the doors of whoever can help us.”

On Sunday morning, thousands of motorcycle riders — driving in pairs in a mile-long motorcade across Edsa — took part in a unity ride.

They stood in solidarity with, among others, comrades whose livelihoods are threatened by the crackdown, as well as to protest a proposal to introduce double license plates for motorcycles, supposedly to prevent crime.

“Those are just some of the disturbing ways they discriminate against motorcycle riders,” Rillera said. “We’re unfairly targeted by policies that criminalize us, as if we’re not legitimate workers trying to eke out a living.”

Rillera is among the 25,000 Angkas riders affected by the LTFRB resolution issued on Dec. 12.

It was prompted by a Supreme Court order putting on hold the implementation of a Mandaluyong court ruling that allowed the motorcycle-hailing app to operate.

The LTFRB and Department of Transportation (DOTr) has warned Angkas against disobeying the high court’s order.

But while Angkas has said it would continue operations, it denied allegations that it was defying the LTFRB.

According to its public affairs head George Royeca, the company will exhaust all legal remedies until a court decides whether it is legal. Angkas also promised to shoulder all the penalties to be slapped on its apprehended riders.

If caught, a rider could face up to P6,000 in fines in addition to the impounding for three months of their motorcycles.

“We are here to abide by the law. Time and time again, we have told our drivers to comply, not to argue with traffic enforcers,” Royeca told reporters.

But he also urged anew lawmakers to amend Republic Act No. 4136, or the Land Transportation and Traffic Code, that bans motorcycles from being used as public utility vehicles (PUVs).

Since it began operating in 2016, Angkas has positioned itself as one of the alternative modes in the absence of viable mass transit options in Metro Manila.

However, it is still not recognized as a transport network company which will authorize it to offer rides to passengers.

The DOTr cited the high number of road accidents involving motorcycles as an
argument against classifying them as PUVs.

But Jobert Bolanos, head of the Motorcycle Rights’ Organization, said the refusal to regulate bike taxis was rooted in the deep-seated stigma against motorcycles, which were being unfairly tagged as “crime machines.”

This much was clear, he said, following a Senate proposal requiring motorcycles to have two larger license plates supposedly to help identify riders involved in criminal activities or accidents.

Bolanos argued that having a reflectorized license plate in front of a motorcycle that could easily be torn up and break off could pose more risks to both driver and rider.

By legitimizing motorcycle services such as Angkas, he said, riders would not only have stable jobs, but could also contribute to easing up worsening traffic.

“It’s a big deal for motorcycles to be considered PUVs,” Rillera said. “The law is the only thing stopping us. It’s high time it should be amended to favor the poor like us.”