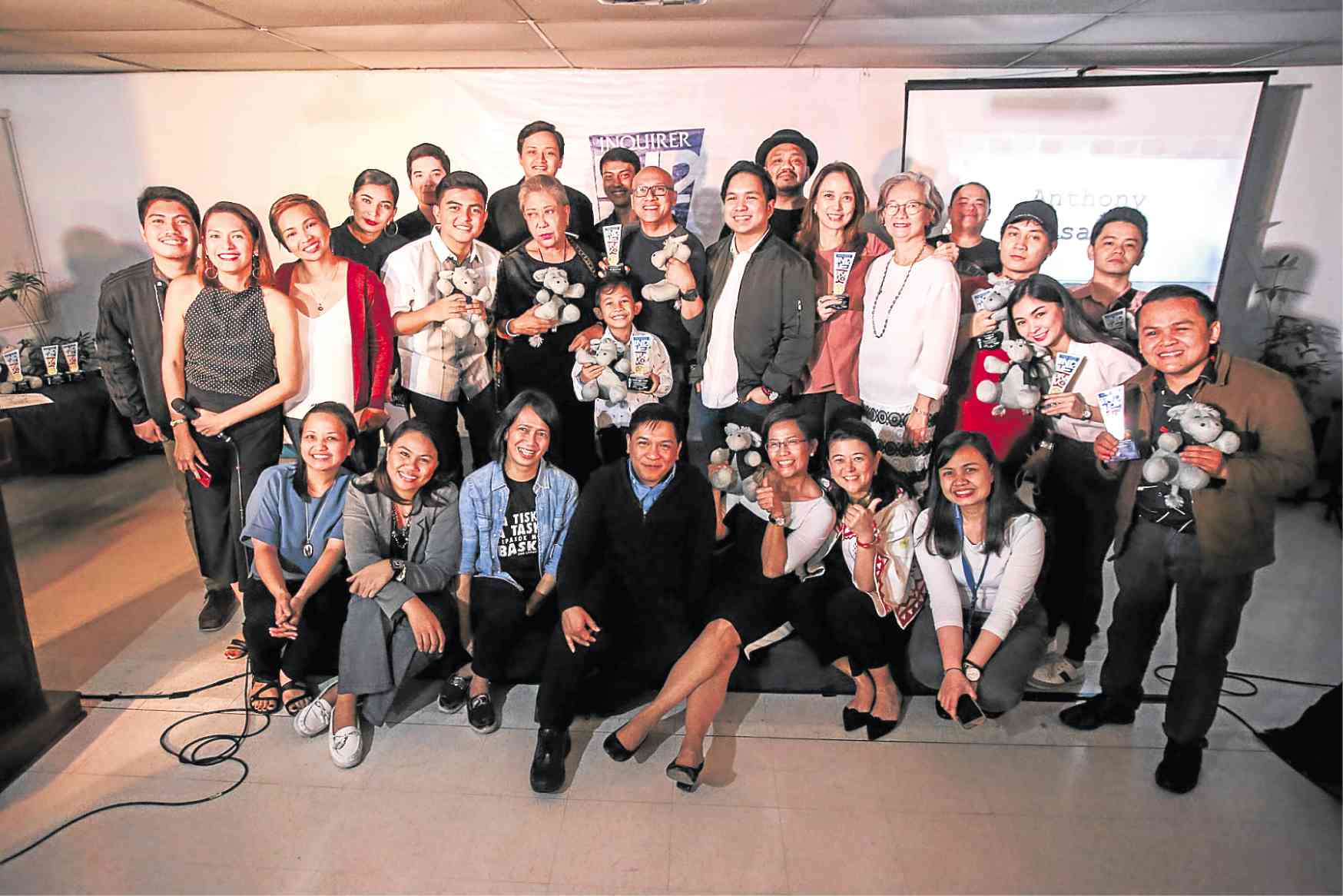 For producing work worthy of our praise, bravo!” Inquirer president and CEO Sandy Prieto-Romualdez told the 27 honorees in this year’s edition of the Inquirer Indie Bravo! Awards held on Thursday night.

Romualdez, who presented the trophies to the awardees, also urged them to “continue inspiring the future generation with stories we’d love to go back to over and over again. Carry on the fire, the passion that drives you to do whatever you love to do.”

For nine years now, the Inquirer has been paying tribute to Filipino artists who bring home recognition and honor from international film festivals.

“The [Inquirer] Entertainment team has journeyed with you in all your achievements,” Romualdez said, noting that the newspaper’s support for the independent movie movement “started from way back—when your work was still undervalued. I am just so proud that the team was able to give you the recognition you deserve.”

Christian Bables, who earlier received a best actor trophy from the 2018 Hanoi International Film Festival for his performance in the Chito Rono drama “Signal Rock,” said in response: “One feels more fulfilled knowing that his work is being appreciated by his own people.” 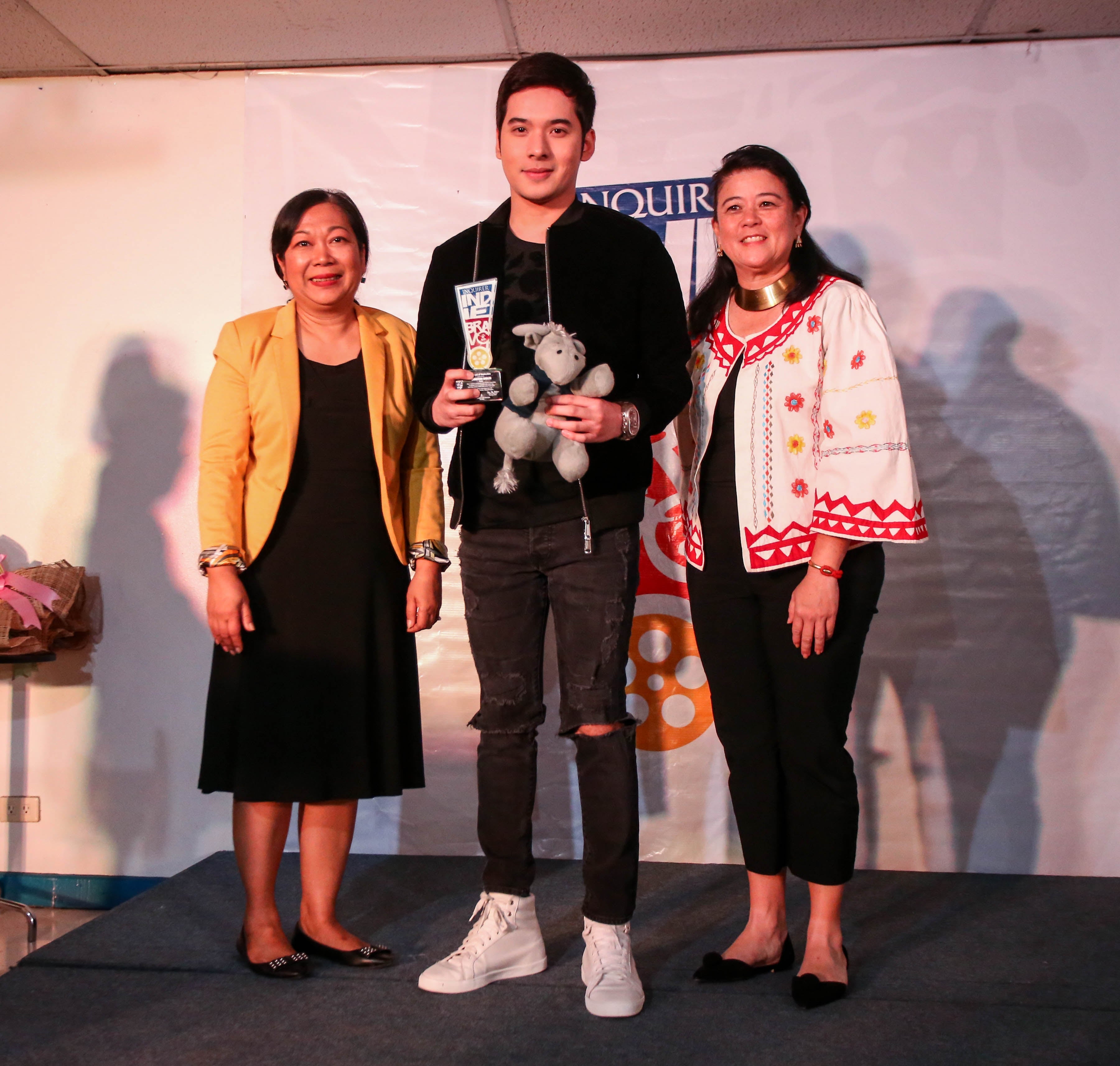 Bables added: “To be recognized by the Filipino people for the hard work that I’ve invested in my character Intoy [in ‘Signal Rock’] is really something else.”

In their acceptance speeches, fellow awardees Mary Joy Apostol (for “Birdshot”) and Timothy Castillo (“Neomanila”) also relished the feeling of being honored in one’s own country.

Carlos Dala, who was recognized for his performance in Carlo Obispo’s “1-2-3,” shared the honor with other workers in the film industry. “No matter what you do, whether you’re the actor, director, editor, writer or a member of the production team, you are still very much a part of the message of the film [you worked on],” he said.

A total of seven actors were honored in the two-hour ceremony held at the Inquirer’s Makati office and attended by more than a hundred industry personalities.

Aside from Bables, Apostol, Castillo and Dala, the other actors recognized were Laila Ulao (“Women of the Weeping River”), Ian Veneracion (“Ilawod”), and Ryza Cenon (“Mr. and Mrs. Cruz”). 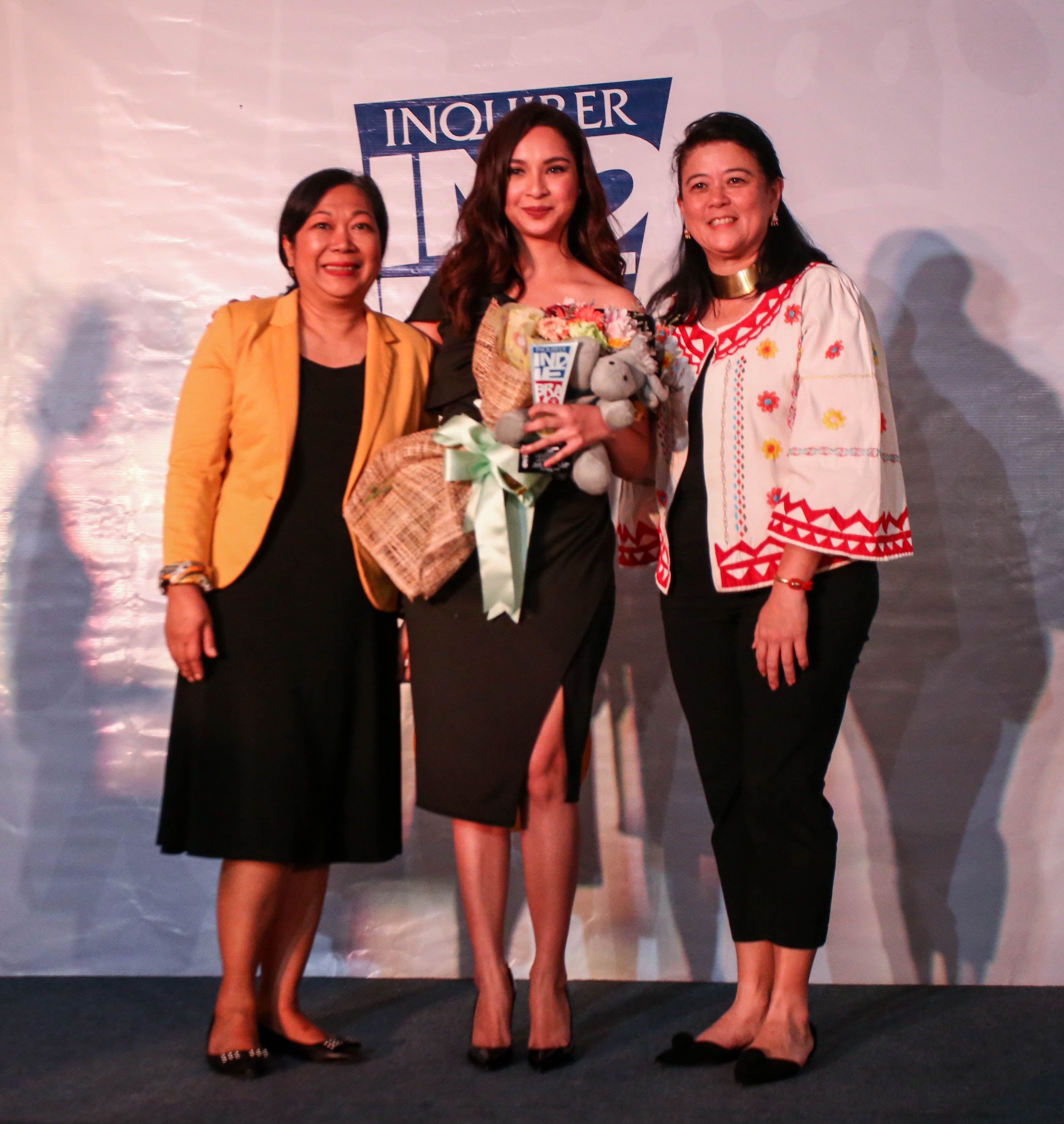 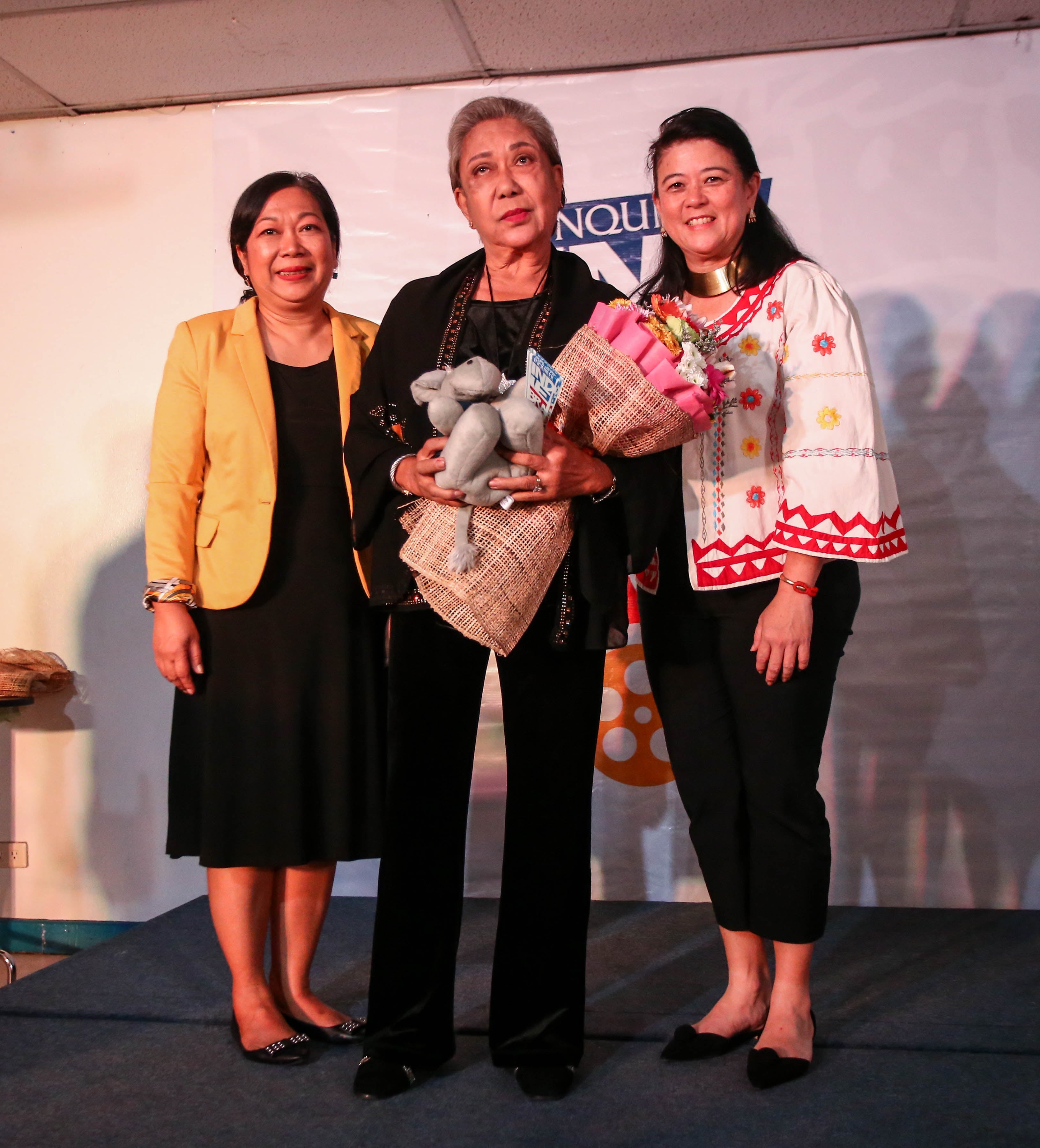 GETTING HER DUE Character actor Odette Khan is flanked by Inquirer president and CEO Sandy Prieto-Romualdez (right) and PDI AVP for corporate affairs Connie Kalagayan at the 9th Indie Bravo! Awards on Friday.

Italian documentarist Andrea Capranico was honored for his film “The Landscape Within,” which, he said, was  “100 percent Filipino, especially in light of the centrality of its subject.” The filmmaker said it meant a lot to him that “after a long run in international film festivals, this docu finally comes home.”

Kara Magsanoc-Alikpala, also a documentarist and coproducer of Raval’s “Call Her Ganda,” said it was her first time to get invited to the Inquirer “not as the daughter of LJM,” the paper’s much-loved editor in chief Letty Jimenez-Magsanoc who passed on in 2015.

“I wouldn’t miss this chance,” Alikpala said, adding that this particular Indie Bravo! event was special to her. “My mom always believed in the independent artist and his spirit. She always believed in freedom of expression in all types of platform, including this one. She always told us that freedom is as natural as breathing and so it’s a birthright for everyone. Thank you, Inquirer, for honoring the film industry.”

A reboot, a tribute

Also honored that night were National Artist for Music Ryan Cayabyab, for his work in the musical film “Ang Larawan,” which he shared with production designer Gino Gonzales, and National Artist for Film Kidlat Tahimik, who was in Amsterdam to receive his Prince Claus Award.

Inquirer Entertainment section editor Rito Asilo, who cohosted the show with this writer, noted that “this year was like a reboot, it can’t be perfect.”

Asilo was referring to the recent passing of Indie Bravo! project director and Entertainment section writing editor Bayani San Diego, who was known for his passion in promoting indie movies. A portion of the two-hour ceremony paid tribute to San Diego.

This year’s 27 awardees “are our choices,” Asilo said, adding that the Inquirer Entertainment team “narrowed down [its] choices based on the files given by the Inquirer Research Department (headed by Minerva Generalao).”

There is a “need to continually find ways to keep refining Indie Bravo! the way that the indie scene has taken a long time to refine, polish, smoothen the edges and iron out the kinks,” Asilo said. “People have to understand that we mean well … We appreciate and learn from the feedback we’re getting because that’s how a healthy democracy works.”

Former Inquirer Entertainment section editor Emmie Velarde, among the prime movers of the annual indie awards, noted that the year-end recognition was quite simple in design: “You make the movies, you win abroad, you let us know, and then in December, you come to this party.”

She also clarified that the Indie Bravo! Awards was “not in the business of judging. We observe, we report, and we give you love … Those of you who were here the very first time have witnessed what we dreamed this gathering could, would and should be. It’s a sharing of collective joys over one another’s victories [in an] atmosphere of sheer camaraderie.

“It is not a competition, but an annual reunion of like minds that see one vision, and hearts that nurture one dream,” Velarde said. “It will always be the media home that welcomes you back following your overseas triumphs,” she added.

The event, Velarde noted, was now nine years old. Citing Inquirer board member Marixi Rufino-Prieto, Velarde promised that the Indie Awards “will stay for as long as filmmaking still throbs in your veins, and that seems to be a long, long time.”