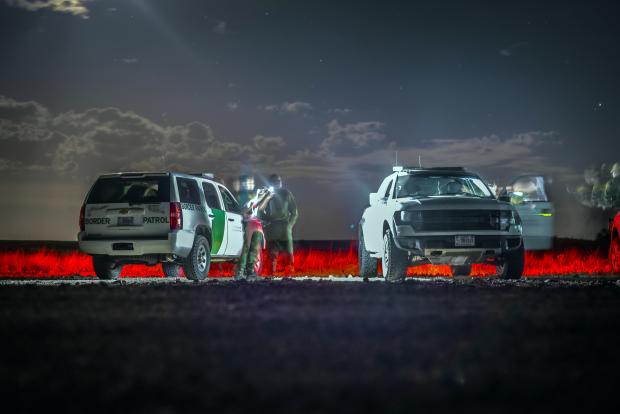 In this photo, taken June 23, 2015, Border Patrol agents wait for other units in the Animas Valley in New Mexico’s boot heel area. A 7-year-old Guatemalan girl, picked up with her father and dozens of other migrants along the remote stretch of the U.S.-Mexico border, has died, federal officials said Friday, Dec. 14, 2018. (Photo by ROBERTO E. ROSALES / The Albuquerque Journal via AP)

WASHINGTON — Just 7 years old, Jakelin Amei Rosmery Caal Maquin was picked up by U.S. authorities with her father and other migrants this month in a remote stretch of New Mexico desert.

Some seven hours later, she was put on a bus to the nearest Border Patrol station but soon began vomiting. By the end of the two-hour drive, she had stopped breathing.

Jakelin hadn’t had anything to eat or drink for days, her father later told U.S. officials.

The death of the Guatemalan girl is the latest demonstration of the desperation of a growing number of Central American families and children showing up at the U.S.-Mexico border, often hoping to claim asylum, and it raises new questions about how well authorities are prepared.

Customs and Border Protection said Friday that the girl initially appeared healthy and that an interview raised no signs of trouble. Authorities said her father spoke in Spanish to Border agents and signed a form indicating she was in good health, though a Guatemalan official said late Friday that the family’s native language was a Mayan dialect.

CBP Commissioner Kevin McAleenan said agents “did everything in their power” to save her.

The episode drew immediate questions from members of Congress and others about whether more could have been done.

There were only four agents working with a group of 163 migrants, including 50 unaccompanied children, and only one bus to take them to the nearest station 94 miles away.

The protocols the agents followed failed to alert them to any signs of distress until it was too late.

“A 7-year-old girl should not be dying of dehydration and shock in Customs and Border Protection custody,” Senate Minority Leader Chuck Schumer tweeted.

The Rev. John L. McCullough, president of Church World Service, said her death was a result of “the administration’s immoral war on immigrants.” He declared, “People don’t walk thousands of miles unless they are desperate for freedom at the end of their journey.”

The Homeland Security Department’s inspector general opened an investigation, and congressional leaders promised one as well.

The girl and her father, 29-year-old Nery Gilberto Caal Cuz, were arrested with the large group near the Antelope Wells border crossing at about 9:15 p.m. Dec. 6.

The rugged, mountainous area is home to ghost towns and abandoned buildings from Old West homesteader days. It’s an unforgiving terrain where Geronimo made his last stand and remains largely isolated with no cell service and few unpaved roads. The sparsely used official port of entry is open from 10 a.m. to 4 p.m.

The group was held at one of 17 “forward operating bases” in Arizona, New Mexico and Texas — spartan facilities built in recent years to increase official U.S. presence in extremely remote areas. Agents live there on weeklong assignments because driving back and forth every day from their stations would consume enormous amounts of time.

Jakelin and her father were held in the facility with food and water but no medical aid.

CBP officials say the drive from Antelope Wells to the nearest Border Patrol station in Lordsburg can take hours.

With the migrants, the agents went over an intake form that reads: “Receiving screening will be performed by professional or paraprofessional personnel trained to recognize the state of conscious, quality of gross motor function, fever or other signs of illness upon arrival at the facility.”

According to the form, the girl showed no sign of illness. She was not sweating, had no tremors, jaundice or visible trauma and was mentally alert.

“Claims good health,” the form reads. Jakelin’s father appeared to have signed the form, which was obtained by The Associated Press.

Arresting such large groups poses logistical problems for agents, who have to wait on transport vans that are equipped with baby seats to take the migrants to processing facilities, some which are far from the border.

There is a single bus that transports migrants to and from this area to the base in Lordsburg, and, following protocol, the other minors filled the first bus while the daughter and her father waited.

It’s not clear whether Jakelin ate or drank anything while in custody.

The father and daughter did not board the bus until 4:30 a.m. She began vomiting at 5. The bus continued — there was no way to receive medical care where they were, officials said — and radioed ahead to have emergency medical technicians available when they arrived in Lordsburg. By the time they arrived, at 6:30, she had stopped breathing.

Emergency crews revived her, and she was airlifted to an El Paso, Texas, hospital, while the father was driven there. The girl died at about 12:30 a.m. Dec. 8.

Officials said she had swelling on her brain and liver failure. An autopsy was scheduled to determine the cause of death. The results could take weeks.

CBP said Friday it didn’t immediately publicize the death out of respect for the family but is reviewing its disclosure practices. Commissioner McAleenan didn’t mention the girl’s death when he was questioned by senators this week on border issues.

“The agents involved are deeply affected and empathize with the father over the loss of his daughter,” McAleenan said Friday. “We cannot stress enough the dangers posed by traveling long distances, in crowded transportation, or in the natural elements through remote desert areas without food, water and other supplies.”

White House spokesman Hogan Gidley described Jakelin’s death as “a horrific, tragic situation” and called for “commonsense laws to disincentivize people from coming up from the border,” crossing illegally.

Guatemalan consular officials said they had spoken with the father who was deeply upset. Tekandi Paniagua, the Guatemalan consul in Del Rio, Texas, told Univision said the family’s native language was Ki’che’, a Mayan dialect spoken in the country’s highlands.

The girl’s father is at Annunciation House, an immigrant shelter in El Paso, said director Ruben Garcia. Garcia said the dad isn’t speaking with reporters but now has an attorney. The group planned a press briefing for Saturday but Garcia said the father would not be present.

Arrests in the U.S. have surged since summer, with many prospective migrants coming from the highlands, where Mayan dialects flourish.

In many ways, the group of 163 migrants that included the girl offers a snapshot of how dramatically the border has changed in recent years.

In November, there were 51,001 arrests of people entering the country illegally from Mexico — the highest of Donald Trump’s presidency — and more than half were traveling as families or unaccompanied children.

It was unclear if any in the group expressed fear of returning home, but families and children increasingly seek out agents to pursue asylum or other humanitarian protection, avoiding an often life-threatening effort to elude capture in remote areas.

The Trump administration has made curbing illegal immigration a signature issue — and some advocates say its policies are prompting more people to cross in perilous ways.

Immigration officials say their system is strained and not equipped to handle such a high volume of families who can’t be easily returned, but there is resistance to suggestions to change facilities to better accommodate families.

The government notes there are many other border missions, including trade, commerce and counterterror efforts. /atm