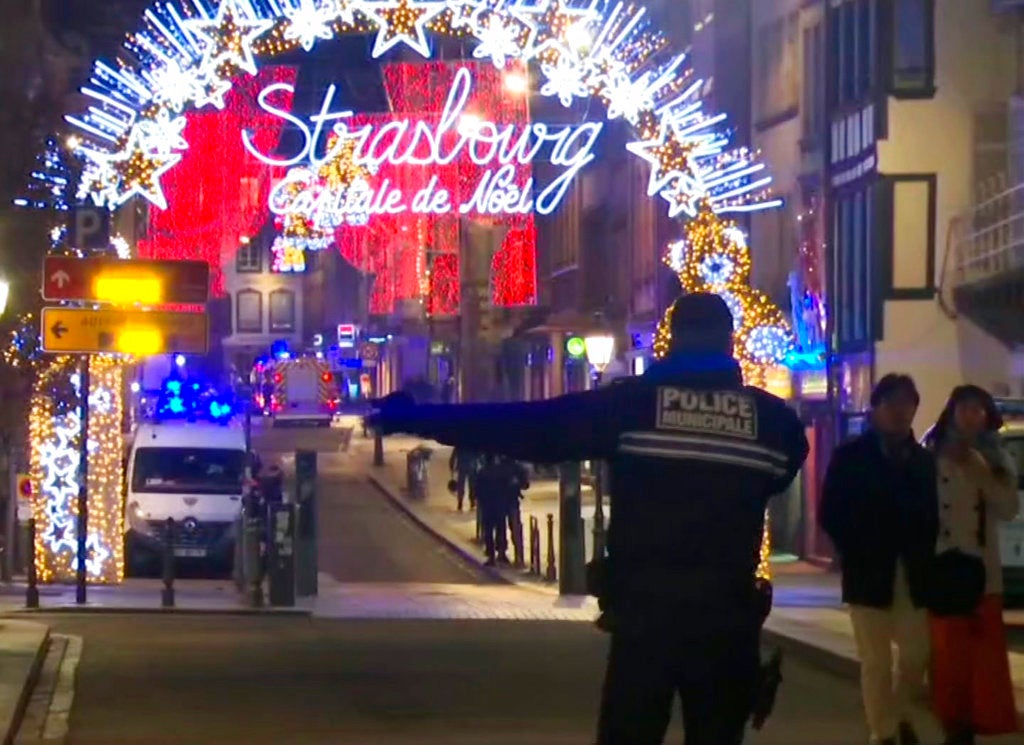 FILE PHOTO: In this image made from video, emergency services arrive on the scene of a Christmas market in Strasbourg, France, Tuesday, Dec. 11, 2018. A French regional official says that a shooting in Strasbourg has left at least one dead and several wounded in the city center near a world-famous Christmas market. The prefect of France’s Bas-Rhin region says the gunman, who is still at large, has been identified. Authorities haven’t given a motive for the shooting. (AP Photo)

Strasbourg, France — The gunman who killed three people at a Christmas market in Strasbourg was shot dead by French police on Thursday as the Islamic State jihadist group claimed him as one of its “soldiers.”

More than 700 French security forces had been hunting for 29-year-old Cherif Chekatt since the bloodshed on Tuesday night — the latest in a string of jihadist attacks to rock France.

Interior Minister Christophe Castaner said three police tried to question Chekatt after spotting him on the street in the Neudorf area of the northeastern French city where he grew up, but he opened fire.

“They immediately returned fire and neutralised the assailant,” Castaner said.

A source close to the investigation said a woman spotted a man fitting Chekatt’s description with a wounded arm on Thursday afternoon and alerted authorities, who sealed off the area and used a helicopter with thermal cameras to hunt for the suspect.

People gathered at the police cordon where Chekatt was shot and applauded, some shouting “bravo!”, a source said.

“It’s really a huge relief,” said Alain Fontanel, a local official in the mayor’s office, describing the anxiety that locals had felt since Tuesday’s attack.

The propaganda wing of the Islamic State group claimed responsibility for Tuesday’s attack.

The perpetrator of “the attack in the city of Strasbourg… is one of the soldiers of the Islamic State and carried out the operation in response to calls to target nationals of the coalition” against IS, the Amaq agency said in a message posted on Twitter.

Chekatt, who lived in a rundown apartment block a short drive from the city centre, was flagged by French security forces in 2015 as a possible Islamic extremist.

France has been hit by a wave of attacks from people claiming allegiance to Al Qaeda or IS since 2015, which have claimed the lives of nearly 250 people, according to an AFP toll.

It is also not the first time a Christmas market has been targeted in Europe.

In 2016, a jihadist attacked a Christmas market in Berlin and went on the run through the Netherlands and France before being shot and killed three days later in northern Italy.

Chekatt was believed to have been wounded after exchanging fire with soldiers during the attack, but managed to escape and had not been seen since fleeing the scene on Tuesday.

Police in several other countries had joined the hunt for the career criminal with at least 27 convictions in four European states.

Officers who had already detained Chekatt’s parents and two brothers on Wednesday took a fifth person into custody for questioning on Thursday.

French President Emmanuel Macron thanked security forces in a tweet and vowed: “Our commitment against terrorism is total.”

He earlier expressed “the solidarity of the whole country” towards the victims.

“It is not only France that has been hit… but a great European city as well,” he added, referring to the seat of the European parliament in the eastern French city that lies on the border with Germany.

Strasbourg’s location in the heart of western Europe means that Germany, Switzerland, Belgium and Luxembourg can be easily reached by car or train, making the search for Chekatt more complicated.

Swiss police had reinforced border checks, while German authorities also widely published the photo of the suspect, which showed him with dark hair, a short beard and a mark on his forehead.

As police hunted Chekatt, the French government urged “yellow vest” protesters angry over French economic reforms not to hold another round of demonstrations this weekend, given the strain on the country’s security forces.

Government spokesman Benjamin Griveaux called on the anti-government protesters to be “reasonable” after nearly four weeks of often violent demonstrations that have led the government to offer a range of financial relief to low earners.

“Our security forces have been deployed extensively these past few weeks,” Griveaux told CNews television.

“It would be better if everyone could go about their business calmly on Saturday, before the year-end celebrations with their families, instead of demonstrating and putting our security forces to work once again,” the government official added.

The yellow-vest protesters, known for their fluorescent high-visibility jackets, had called for a fifth round of protests this Saturday.

The protests began on November 17 over fuel tax increases, but snowballed into a revolt over living standards as well as Macron’s perceived indifference to the problems of ordinary citizens. /kga