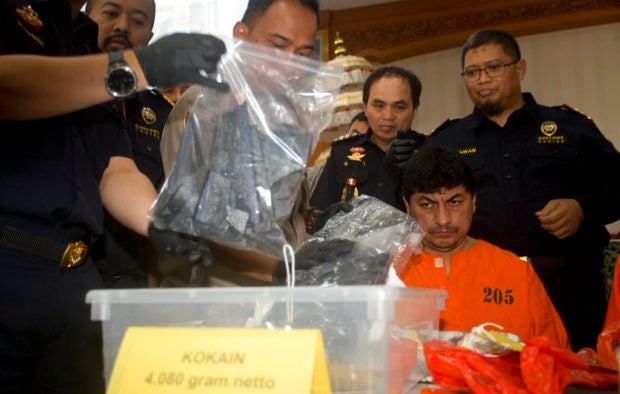 Indonesian custom officers show an evidence as they stand next to Peruvian Jorge Albornoz Gamarra (foreground) during a press conference in Bali, Indonesia on Dec. 13, 2018. AP

DENPASAR, Indonesia — Indonesian police said some of the five foreigners who have been arrested for alleged drug smuggling on the tourist island of Bali since the end of November face the death penalty if convicted.

Police paraded the citizens of Peru, Britain, China, Malaysia and Germany at a news conference Thursday in Denpasar, the capital of Bali province.

The men were arrested in five separate operations by customs and police since Nov. 30 in which 4 kilograms (8.8 pounds) of cocaine as well as marijuana, ecstasy and ketamine were seized.

Indonesia has strict drug laws and dozens of convicted smugglers are on death row. Its last executions were in July 2016, when an Indonesian and three foreigners were shot by a firing squad.

A police statement said the 4 kilograms of cocaine was smuggled by a Peruvian citizen in the lining of his suitcase and had a value of about 10.2 billion rupiah ($700,000).

Police said the Chinese citizen was arrested with 200 ecstasy tablets and ketamine powder, and the Malaysian had small quantities of synthetic cannabis and ecstasy. /ee