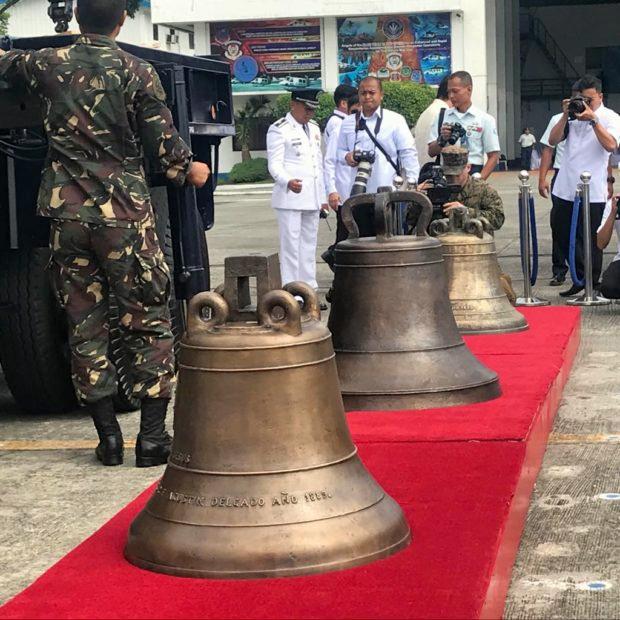 MANILA, Philippines — President Rodrigo Duterte will not be able to attend the turnover of the historic Balangiga Bells in Eastern Samar, Malacañang said Wednesday night.

“President Rodrigo Roa Duterte would not be able to attend the turnover of the Balangiga bells to officials in Eastern Samar, which is scheduled on Saturday, December 15,” presidential spokesperson Salvador Panelo said in a statement.

Panelo said the President would instead attend to some “pressing matters of governance that require his utmost and immediate attention” on that date.

However, the Palace official did not elaborate on the reason.

On Tuesday, the President also missed the tunrover of the bells at Villamor Air Base in Pasay City.

The Balangiga bells returned to the Philippines 117 years after it was taken by the United States as war booty.

“The bells are now indeed home,” Panelo said. “The descendants of those who perished in one of the bloodiest and tragic consequences of the Filipino- American war rightfully cherish the coming home of a part of our national heritage and the Filipino nation join them in rejoicing the historic event.”

“As the Balangiga Bells resume their ringing after a silence of more than a century, the booming sounds that will come out of them will resonate around the world with the sterling message that foreign domination nor outside intrusion on its sovereignty has no place in this part of the world.” /atm

Read Next
Ressa’s Time citation: A ‘recognition of the tenacity’ of Philippine press, says NUJP
EDITORS' PICK
What to watch out for when selecting a video surveillance solution
Heads may roll at BOC, says Palace if sugar smugglers are allowed to use recycled import permits
vivo brings to the Philippines a powerful smartphone with a slimmer body, the vivo Y02s for only PHP 6,499
DOH reports increase in daily COVID-19 deaths, mostly unvaxxed
Palace: Biggest supermarkets in PH commit to sell sugar at P70 per kilo
House energy committee chair Arroyo bats for cheap electricity
MOST READ
DepEd to give teachers P5K cash allowance within first week of classes
GSIS cool to idea of lowering retirement age in PH
Alyssa Valdez to miss Creamline’s AVC Cup campaign
DOJ indicts bank officer in $2.1 billion Wirecard fiasco
Don't miss out on the latest news and information.