MANILA, Philippines — The House of Representatives on Monday unanimously gave its approval to a bill protecting women and children from all forms of electronic violence.

The chamber voted 207-0 to approve on third and final reading House Bill No. 8655 or the “Expanded Anti-Violence Against Women and Children (E-VAWC)” bill that seeks to amend Republic Act No. 9262 of 2004.

HB 8566 amends Section 3C of RA 9626 to include in the definition of psychological violence any acts that may be committed through “physical, verbal, emotional, electronic or information communication technology (ICT)-related means.”

The proposed measure also defines ICT-related violence as “any act or omission involving the use or exploitation of data or any form of ICT which causes or is likely to cause mental, emotion or psychological distress or suffering to the women and her children.” 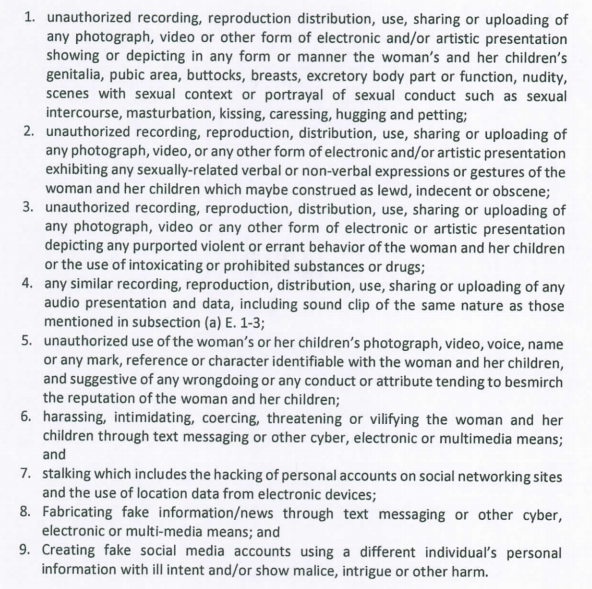 The bill also slaps the penalty of prison mayor and a fine between P300,000 and P500,000 for acts “causing and threatening electronic violence against a woman and her children.”

Gabriela Reps. Emmi de Jesus and Arlene Brosas welcomed the House approval of the proposed measure, describing it as “a ray of good news,” and a “historic advance of the #LabananAngAbuso campaign.”

“This is a much-awaited development by women abused by their partners, as the measure expands the definition of VAWC to include forms of electronic violence, with corresponding penalties,” De Jesus, one of the principal authors of the Expanded VAWC bill, said in a statement.

“We are pushing the E-VAWC to address the loopholes in Republic Act 9262 of 2004, which failed to mention electronic violence that could cause more damage but are not as visible as the manifestations of physical violence,” she added.

Brosas, meanwhile, urged the Senate to fast-track its counterpart measure.

“We urge the Senate to do its part and fast-track the counterpart measure amending the Anti-VAWC Act. If signed into law, this will be a very valuable legacy of the 17th Congress to women long suffering from all kinds of abuse and harassment,” Brosas said. /kga