newsinfo / Nation
Nation
INSTEAD OF ‘SMEARING’ THE ADMINISTRATION

Panelo to Trillanes: Focus on resolving your legal cases 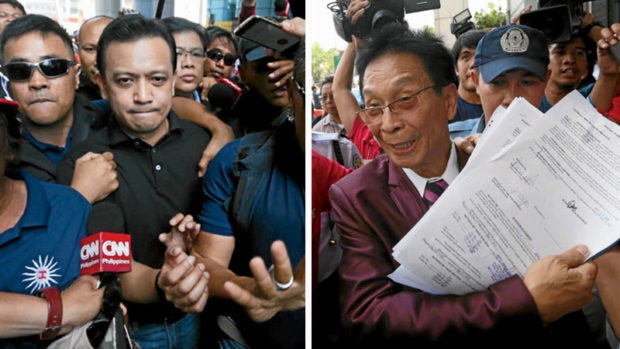 MANILA, Philippines — Sen. Antonio Trillanes IV should focus on resolving legal charges against him instead of “smearing” the administration using his “squid tactics.”

Presidential spokesperson Salvador Panelo gave this answer to the statement of Trillanes against the administration following the issuance of an arrest warrant against him for his libel cases filed by former Davao City Vice Mayor Paolo Duterte, who is the President’s son, and his brother-in-law lawyer Manases Carpio.

“Everyone must be accountable for any wrongdoing or infraction of any law,” Panelo said in a statement issued on Sunday. “His being a Senator cannot excuse him from prosecution from those he has wronged.”

“Instead of employing squid tactics and smearing the Administration, he should focus on the legal remedies available to him,” he added.

Panelo noted that the recent remarks of the senator “prove once and for all that he is an incorrigible rouble rouser and perennial whiner, a false accuser who, when hailed to court, cries like a baby reminiscent of staging a coup and surrenders instantly even without a gun being fired from the government forces.”

Earlier, Trillanes slammed the kind of justice being implemented by the Duterte administration.

[Duterte’s government has an inverted sense of justice. Plunderers are set free. Critics are being framed so that they can be jailed.]

However, Panelo denied Trillanes’ accusations and stressed that the administration played no role in decisions made by the judiciary.

“Detractors and critics of the President are quick to malign the Administration thinking that it has a role in decisions deliberated upon and pronounced by courts of law. For their information, we do not,” Panelo said.

“This is particularly true in graft cases, as these are prosecuted not even by us but by the Office of the Ombudsman before the Sandiganbayan,” he added. /atm