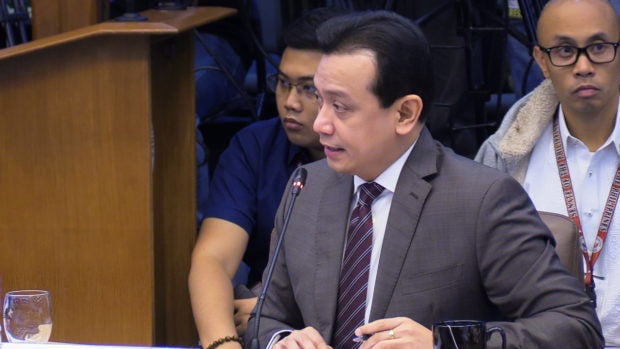 Senator Antonio Trillanes IV on Friday slammed the kind of “justice” being implemented by the Duterte administration, saying the critics are being accused to be convicted while plunderers were being freed.

(Justice is upside down under the Duterte government. The plunderers are being released from prison. Cases are filed against critics so that they can be convicted.)

Trillanes was also referring to former Senator Ramon Revilla Jr. as the “plunderer,” because Revilla was recently acquitted of plunder case and released from the Philippine National Police (PNP) Custodial Center.

Trillanes said he was supposed to turn himself in voluntarily and “coordinate with National Capital Region Police Office (NCRPO) chief Director Guillermo Eleazar” but decided to post bail before the Davao RTC Branch 54 on Monday.

“So, instead of turning myself in, which is apparently not possible under the circumstances, I will just post bail before the appropriate court on Monday,” Trillanes said.

Trillanes explained that the serving of arrest warrants for minor cases such as libel on Fridays, weekends and holidays is prohibited as per Department of Justice circular.

“However, I was informed by my lawyers that the service of warrants of arrests for minor cases like libel on Fridays, weekends and holidays is prohibited per existing DOJ circular,” he said.

The senator also cited that in the 1987 Constitution, he is privileged from being arrested on minor cases while the Congress is in session.

“Under Article VI, Section 11 of the Constitution, as a member of Congress, I am privileged from being arrested in cases punishable by less than six years imprisonment while Congress is in session,” he said. /jpv