Town in frenzy over return of Balangiga bells after 117 years 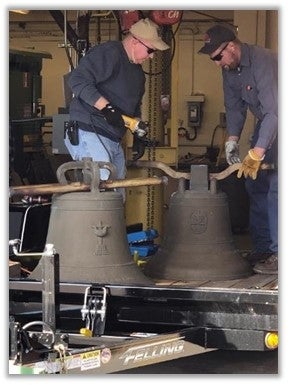 ‘GREATEST CHRISTMAS GIFT’ Workers prepare the two Balangiga bells from FE Warren Air Force Base in Cheyenne, Wyoming, for transport to Guam and then to Manila, where a military plane will fly them, along with a third bell from South Korea, to Eastern Samar. President Duterte and other government officials will turn over the bells to St. Lawrence the Martyr Church in Balangiga (above right), whose town plaza is being spruced up for the much-awaited return of the iconic bells. —PHOTO COURTESY OF US EMBASSY

BALANGIGA, Eastern Samar — Everybody seems to be in a frenzy in this quaint, sleepy town.

Preparations are in high gear for the return of the town’s three iconic church bells, which were taken away as war booty by vengeful American soldiers during the Filipino-American War more than a century ago.

Workers are sprucing up the town’s plaza where a program for the repatriation of the Balangiga bells is scheduled on Dec. 15.

The concrete stands where the weighty bells will be temporarily placed in the grounds of St. Lawrence the Martyr Parish are also being readied.

To say that the townsfolk are excited with the return of the bells — 117 years after these were forcibly removed by American soldiers—is an understatement.

Sixty-two-year-old Constancia Calesterio said the return of the bells would be a realization of the stories about how these were taken away from the town, as told to her by his late father when she was a child.

“He would narrate the story why the bells were taken from our church belfry before we went to sleep at night. Now that these bells will be returned to us, we are really, really excited. No words actually could describe how we feel right now,” said Calesterio, who helped write the script of the annual reenactment every Sept. 28 of the Balangiga Encounter.

Calesterio’s father Felipe, who died in 2013, was the son of Tomasa Abanador Campanero, niece of Capt. Valeriano Abanador, who led the surprise attack on an American detachment in the town on Sept. 28, 1901.

The tolling of the bells signaled the Filipino militants’ assault on soldiers of Company C of the 9th US Infantry Regiment who were having breakfast, killing 54 American soldiers and wounding 18 others.

Calesterio said that based on the accounts of her father, the ringing of the bells was so loud it was heard all over Balangiga and neighboring towns.

An outraged American Gen. Jacob Smith deployed 180 soldiers to the town on Sept. 29, 1901, and ordered them to turn Balangiga into a “howling wilderness.”

Filipino males above 10 years of age were massacred while whole communities were torched to the ground.

From the town’s burned-out church, the Americans removed the bells, which they took back to the United States as war booty.

The bell from Camp Red Cloud was rung to signal the attack, according to historical records.

The Philippine government, Catholic Church and residents of Balangiga had, since the 1950s, been seeking the recovery of the bells to no avail. It was only in August that US Defense Secretary Jim Mattis finally signed the document allowing the bells to be returned to the Philippines.

All three bells, which are now in the US territory of Guam, are scheduled to be flown on Dec. 11 to Villamor Air Base in Pasay City and on Dec. 15 to Balangiga, in time for the start of the traditional, nine-day “Misa de Gallo” that ushers in Christmas Day.

The return of the bells has been dubbed by residents here as their “greatest Christmas gift ever.”

Fe “Joy” Campanero, the town’s information and tourism officer, said everything was in readiness for the occasion, including activities for the bells’ arrival on the morning of Dec. 15, a street parade and a program to showcase local talents.

These activities are meant to “set a festive mood” on the occasion of the bells’ return, Campanero said. 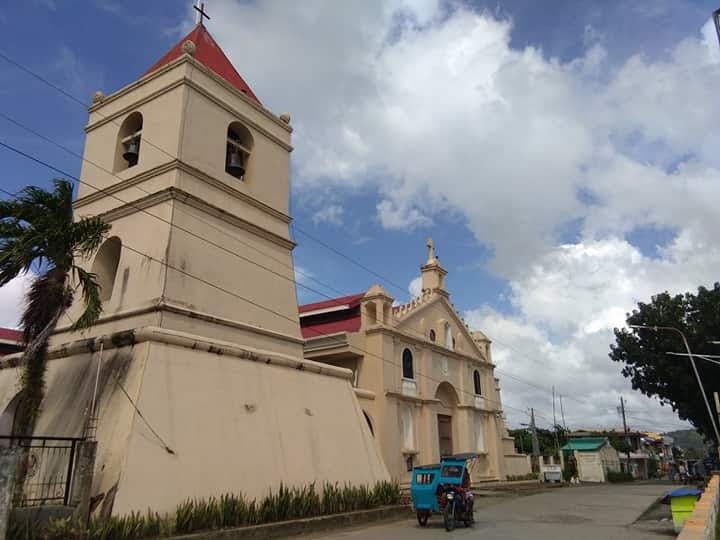 -PHOTOS BY JOEY A. GABIETA

President Rodrigo Duterte, Defense Secretary Delfin Lorenzana and Foreign Secretary Teodoro Locsin Jr. are expected to arrive on the afternoon to formally turn over the bells to St. Lawrence the Martyr Parish through its parish priest, Fr. Serafin Tybaco Jr.

Flowers will be then dropped from helicopters as the bells peal simultaneously—for the first time in more than a century—along with the newer bells at the church’s belfry.

A choir from the Department of National Defense will sing the National Anthem, Campanero said.

Tybaco said the bells’ turnover would be followed by a Mass to be led by Bishop Crispin Varquez of the Borongan Diocese.

Varquez will be joined by his immediate predecessor, Bishop Leonardo Medroso, who had also helped campaign vigorously for the return of the bells, and Bishop Rex Ramirez, a native of Balangiga but is now the prelate of the Naval Diocese.

Campanero said it was not yet certain where the bells—each weighing about 300 kilograms—would be unloaded in Eastern Samar.

She said a government plane carrying the three bells might either land at Daniel Z. Romualdez Airport in Tacloban City or at the seldom-used airport in Guiuan, Eastern Samar, whose runway was built by the Americans during World War II. 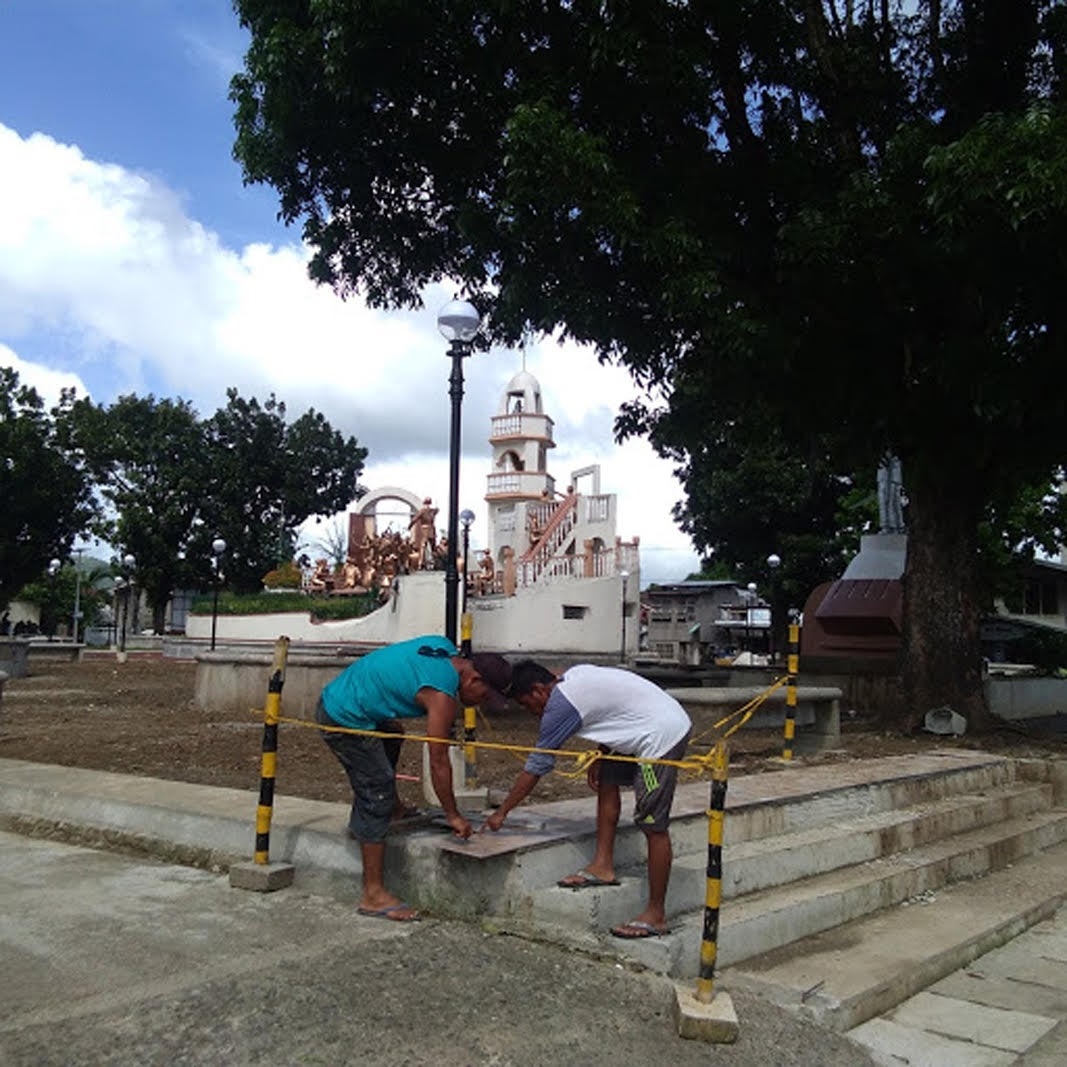 DECEMBER 08, 2018
The town plaza is also being spruced up for the December 15event.
Photo by Joey A. Gabieta, Inquirer Visayas

Tacloban City is about two hours by land to Balangiga while Guiuan is only an hour away.

All three bells are to be temporarily placed on concrete stands on the Church’s grounds so people could admire and touch these, according to the parish.

These will eventually be placed at the church’s belfry.

Lorenzana has said the return of the bells signals will further strengthen ties between the Philippines and the United States.

For Calesterio, Campanero and the rest of the people of Balangiga, the return of the bells closes a chapter in the history of the town whose ancestors stood up to fight for freedom. —With a report from Consuelo Marquez