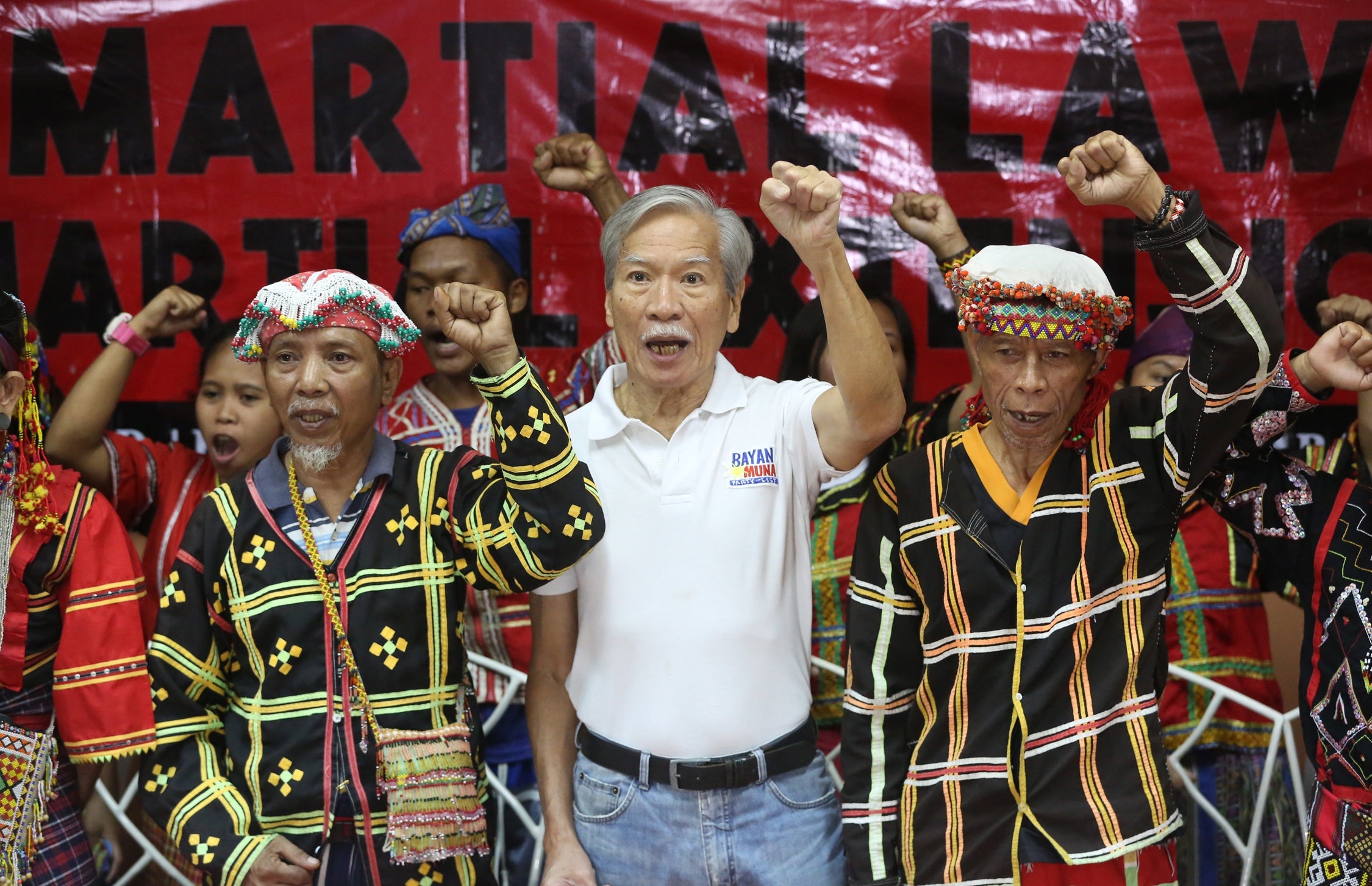 CONSISTENT Former Bayan Muna Rep. Satur Ocampo joins “lumad” leaders from Talaingod and staffers of the lumad school network Salugpungan in denouncing a request by Malacañang for a special session of Congress to extend martial law in Mindanao.—NIÑO JESUS ORBETA

Rights groups continued to slam the Duterte administration’s attempt to extend martial law in Mindanao and decried the use of children caught in the crossfire as a justification.

In fact, the Children’s Rehabilitation Center (CRC) claims military actions have endangered the lives of at least 1,028 children since Presidente Rodrigo Duterte assumed office in 2016.

“All over the Philippines, Duterte’s tyrannical rule victimizes Filipino children, practically every region of the country,” said Frances Bondoc of the CRC.

“From July 2016 to October 2018, CRC has documented nine political killings of children, 17 [minor] victims of frustrated killings, five tortured and hundreds of children coerced to surrender as ‘rebels,’” Bondoc said.

“Martial law has been extended twice in 2017 and has translated into [more] human rights violations, not only in Mindanao but also in [other] regions,” she said.

The group also protested the issuance of Memorandum Order No. 32 that placed Negros, Bicol and Eastern Visayas under a state of national emergency in addition to the martial law in Mindanao.

The Save Our Schools also opposed the extension of martial law and said the government’s “hidden agenda” and “deviousness” actually imperils more tribal folk.

The group has documented 535 cases of attacks on “lumad” schools under martial law in Mindanao.

Muslim rights advocates also scored the proposed extension of martial law and expressed fear it will only lead to more “bloodbaths.”

Jerome Succor Aba, spokesperson of the Muslim group Suara Bangsamoro, said at least 154 activists have been summarily killed in Mindanao since martial law was declared in May last year.

Aba said the 154 persons killed during martial law amounted to one person being killed every week.

“The President knows this,” Aba said. “We informed him about this through different channels. And yet, he decided to extend military rule in Mindanao. Duterte is bloodthirsty.”

Ryan Amper, spokesperson of Barug Katungod Mindanao, said the “bloodbath” can only worsen with Lt. Gen. Benjamin Madrigal Jr. as Armed Forces of the Philippines chief of staff.

Amper said Madrigal would only replicate the atrocities that were committed in counterinsurgency operations in Compostela Valley when he was assistant division commander of the Army’s 10th Infantry Division.

“Madrigal’s reign as [Eastern Mindanao Command (EMC)] chief was marked with dozens of extrajudicial killings,” he said. “Most of the 154 victims were killed within the EMC’s area of responsibility.”

The Senate and the House of Representatives are set to meet and tackle the President’s request for the extension of martial law next week.

At least two senators—Manny Pacquiao and Richard Gordon—said they would support the extension.

Gordon also supported the extension of martial law in Mindanao, although he said he also admitted that the Abu Sayyaf terrorist group continued to be active.

“The military should have a grand plan to put a stop to the problem once and for all. Is this the new normal?” he said.

The President put Mindanao under martial law for 60 days in May last year after Islamic State-allied militants laid siege to Marawi City.