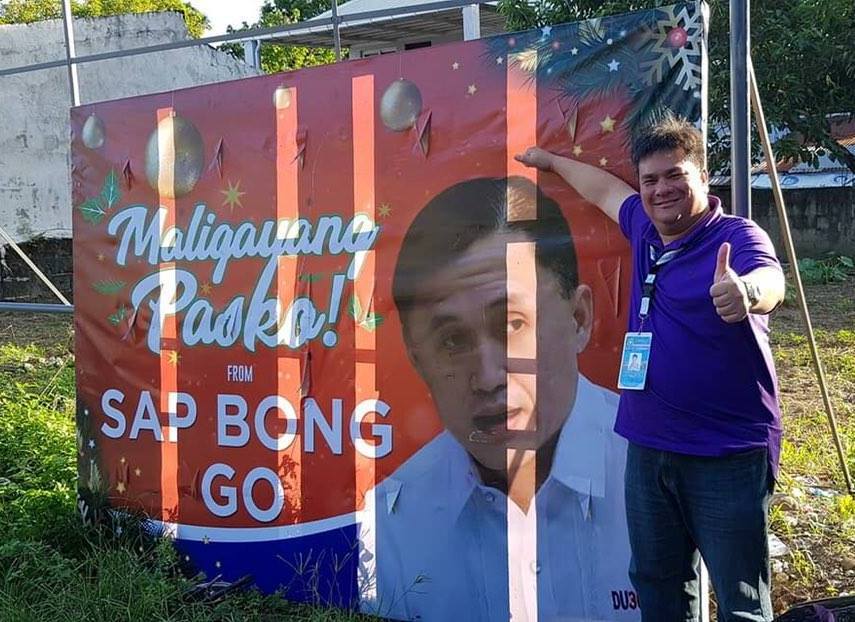 Silay Mayor Mark Golez supervises the reinstallation of the tarpaulin of senatorial candidate and close ally of President Duterte, Bong Go, after it was removed from the city public plaza. Contributed

BACOLOD CITY—The Silay City government has taken down the tarpaulin of senatorial candidate Bong Go at the plaza for failing to secure a permit.

It was instead reinstalled along the road going to the airport since doing so would not require any permit.

Silay Mayor Mark Golez supervised the reinstallation of the tarpaulin which bore “Maligayang Pasko (Merry Christmas) with a huge photo of the face of Go, a close friend of President Duterte.

Go, who has never held any elective position before, is running for senator under the administration party.

Although campaign period starts on Feb. 12 yet, his supporters have been putting up tarpaulins that show his face in the provinces.

One of these was in the public plaza of Silay that was meant to be his Christmas greetings to the residents there.

Golez said city personnel removed the tarpaulin from the plaza on Dec. 5 in violation of Silay City Ordinance No. 2 series of 1997 that requires anyone to apply for permit at the Office of the Building Official prior to the installation of such materials at the city plaza.

Any billboard would also be an obstruction during the opening ceremony of the city’s Christmas Village on Dec. 9.

Golez said he informed the donor, Dindo Ilagan, about the ordinance before the billboard was removed by members of the Office of Building Official (OBO).

Ilagan was not aware of the existing ordinance.

“It was never the intention of the City Government to offend anyone, most especially, SAP Bong Go, but merely to apply the rule of law fairly and squarely to all,” said Golez.

Ilagan, in a meeting, agreed to transfer the billboard on the road leading to the Bacolod-Silay Airport since there was no ordinance that regulates billboards there.

To show that he remains a friend and a “solid supporter” of Go, Golez personally supervised on Thursday the installation of the billboard along the national highway.

Another billboard was installed at the perimeter’s fence of the mayor’s house also leading to the airport.

In a statement, Go said that while he was grateful for the support, he asked those who backed his senatorial bid to follow the ordinances.

“As a word of advice to our supporters, ilagay na lang nila sa mga bahay o private properties bilang parte ito ng karapatan nilang ipahayag ang sarili nila (place these in their homes or private properties as part of their rights to free expression),” he said.

“I would also like to thank Mayor Mark Golez of Silay City for being fair in implementing the law and for being supportive to me and the President,” he added.