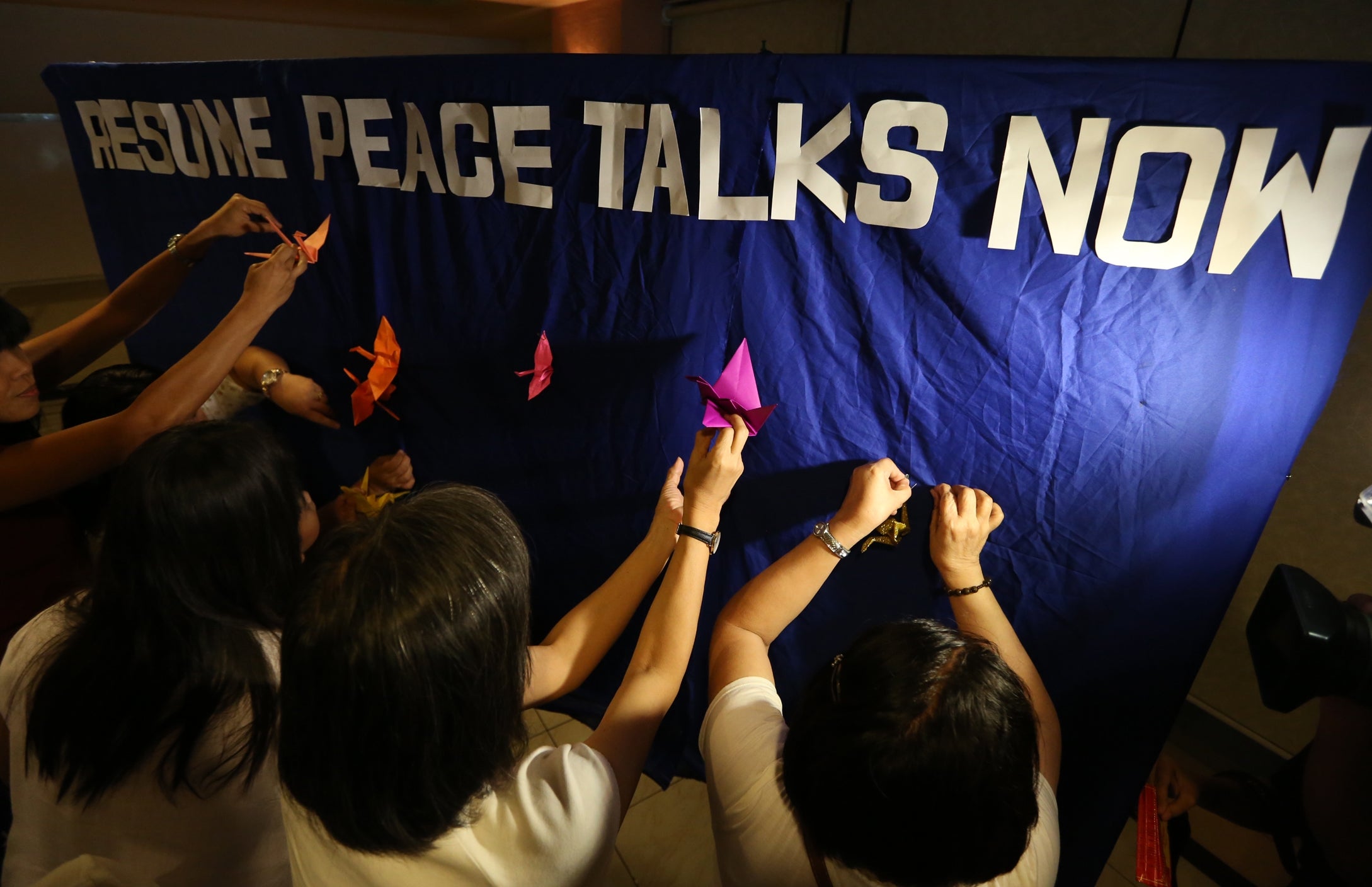 PLEA FOR PEACE Peace advocates gather on Nov. 25 at the forum “Clamor for Peace: Defend Human Rights” calling for the release of communist rebel consultants arrested by the Duterte administration.—NIÑO JESUS ORBETA

SAN PEDRO CITY—A group of peace advocates described as a “bleak time for peace” the arrest of Rey Claro Casambre, a consultant of communist rebels in peace talks with the government, and his wife on what the group said were fabricated charges.

Casambre, 67, was the fourth consultant of National Democratic Front of the Philippines (NDFP) in peace negotiations to be arrested this year.

He is also executive director of nongovernment group Philippine Peace Center (PPC) where his wife, Patricia Cora, a 72-year-old retired math teacher, is a translator.

Both suffer from diabetes.

Bishop Reuel Marigza, of United Church of Christ in the Philippines and also organizer of the group Pilgrims for Peace (P4P), said the only reason he could think of for Casambre’s arrest was “he is being persecuted for his involvement in the peace process by a government that seems no longer interested in peace but only wishes to wage a brutal war against the people.”

“It is a bleak time for peace as a reign of terror is engulfing the whole country with attacks on human rights taking a toll on human rights defenders, community leaders and peace advocates,” he added.

Kristina Conti, of Public Interest Law Center (PILC), said the Casambres were on their way home to Bacoor City, Cavite, when their car was stopped on Molino Boulevard in the village of Niog a little past midnight on Friday.

The couple had come from the wake of geologist Rolando Peña at the University of the Philippines Diliman in Quezon City.

Quoting Casambra, Conti said the couple were, at gunpoint, asked to step out of their car as police searched the vehicle.

A police report said Rey had a warrant for arrest for murder and attempted murder issued by Judge Emilio Dayanghirang III of the Regional Trial Court Branch 32 in Lupon, Davao Oriental.

“Incidental in the service of the warrant of arrest” was the seizure of a .45-caliber gun, a fragmentation grenade, a detonating cord and several bullets, the police report read.

The couple were detained in Camp Crame, the Philippine National Police headquarters.

The PNP, said PILC managing counsel Rachel Pastores, “aids and abets the scuttling of peace talks” by rounding up NDFP consultants, “harassing those involved in peace negotiations and demonizing them unnecessarily.”

Rey Casambre was a political detainee in the early 1990s and had been active in back-channel talks with the Duterte administration for a peace pact.

Bishop Marigza, in a statement on behalf of P4P, said Casambre’s role in peace talks was just to “rally the participation of the primary stakeholders—labor, peasant leaders, activists and human rights defenders in the discourse.”

The statement said the arrest of Casambre and other peace advocates showed an “intent to silence dissent” and “deprive the people of their capacity to resist government policies that are detrimental to their interests and the interest of our nation as a whole.”

Edre Olalia, NDFP legal consultant, said in a statement that the arrest was “predictable, baseless and treacherous.”

Olalia said the arrest of the Casambres had again proven that the Duterte administration “cannot be trusted.”

Olalia maintained that Casambre is covered by the Joint Agreement on Safety and Immunity Guarantees.

“As contrived as expected, a roving firearm and a rusty grenade were again routinely planted to make the arrest appear aboveboard for good measure,” said Olalia.

“Nobody would ever believe such false narrative,” he said.

“All these would boomerang in the long run,” Olalia added.