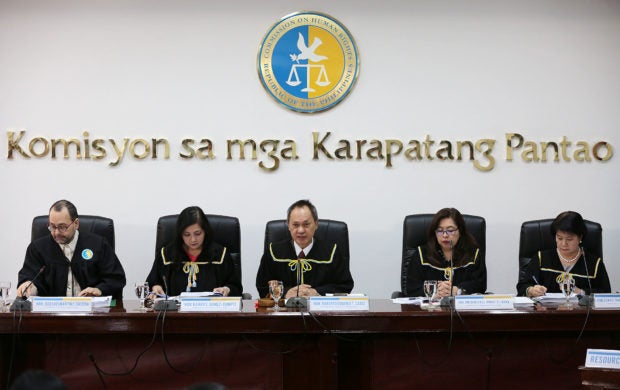 Human rights commissioners at the start of the hearing on a petition linking rights violations with climate change. INQUIRER FILE / GRIC C. MONTEGRANDE

The threat of a harsher, more violent campaign against illegal drugs is “unfortunate” as the country observes the National Human Rights Consciousness Week and the 70th year of the Universal Declaration on Human Rights, the Commission on Human Rights (CHR) said Thursday.

“It is unfortunate that, as we celebrate the National Human Rights Consciousness Week and the 70th year of the Universal Declaration on Human Rights, which is founded on freedom, justice, and peace, the country is being confronted with the threat of a harsher, more violent drug campaign in the face of unresolved deaths, as well as other forms of human rights violations, allegedly linked to it,” CHR Spokesperson Jacqueline De Guia said in a statement.

“We urge the government to uphold the rule of law and respect human rights, as part of its sworn obligation to all Filipinos,” De Guia said.

“If the administration values human life, then human rights must be equally respected as there is no distinction between the two,” she added.

Duterte has once again vowed for a more violent war on drugs, adding that he would try to finish it under his term.

“I’ll try to finish (the war on drugs). I’m not promising but we are all agreed the police and the Armed Forces, we will try to finish itong… And I will be harsh. And there might be really widespread violence but I am prepared for that,” Duterte said in his speech in Malacañang on Wednesday.
“If that is the only how to do it, then… If we have to die, then so be it, we die. After all we are — we should be in heaven,” he added. /cbb