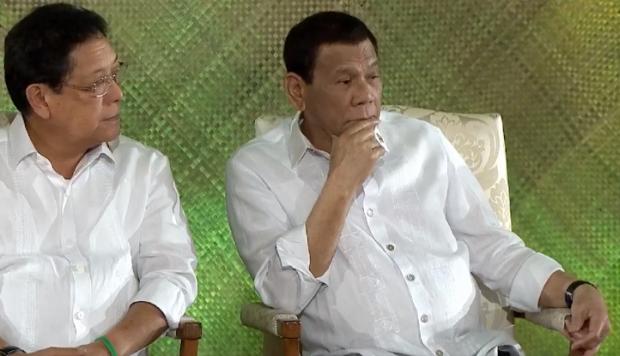 President Rodrigo Duterte, right, with Labor Secretary Silvestre Bello III, wait for the start of the Presidential Awards for Filipino Individuals and Organizations Overseas (PAFIOO) at the Rizal Hall in Malacañan Palace on Wednesday, Dec. 5, 2019. (Photo from an RTVM video)

Duterte made the remark as he again attacked the Catholic Church, which has been critical of his brutal war on drugs and anti-criminality campaign.

“The most hypocritical institution in the entire Philippines is the Catholic Church and the Pope knows that,” he said in a speech during the Presidential Awards for Filipino Individuals and Organizations Overseas in Malacañang.

“No offense intended,” he added. “I have so many relatives who are gay. I have two brother-in-laws who are gay. But most of the priests there are homosexuals, almost 90 percent of you. So do not postulate on my morality.”

The President made the remarks days after Pope Francis told gay priests to be celibate or leave the priesthood.

He again blamed the stance of the Church, whom he described as “the idiots of our time,” for the for the growing population in the Philippines.

“We are very poor. We have a runaway population,” he said. “It’s because of the Church. They have always been against family planning. But the priests and the bishops are also into it producing more Filipinos. The idiots of our times.”

In a speech on Nov. 26, Duterte urged Catholics to stop going to church and just build their own chapel.

The chief executive has been attacking the Church in his speeches, even calling it “full of shit.”

He also earlier earned the ire of the public and the Catholics for calling God “stupid” and questioning the creation theory in the Bible. /atm

In recognition of their outstanding contributions to national development efforts and achievements in their field of profession, President Rodrigo Roa Duterte awards 25 distinguished individuals and foreign-based organizations with the Presidential Awards for Filipino Individuals and Organizations Overseas (PAFIOO) at the Rizal Hall in Malacañan Palace on December 5, 2018.The PAFIOO is a biennial award implemented and managed by the Commission on Filipinos Overseas (CFO). It is the highest honor given by the Government of the Philippines to Filipinos and organizations based abroad. Foreign individuals and organizations that provided national assistance and helped in advancing the cause of Filipino overseas may also be conferred with the award.Likewise, the Chief Executive acknowledges the contributions of overseas Filipino workers (OFWs) as he awards them with the Overseas Workers Welfare Administration (OWWA) 2018 Model OFW Family of the Year Award (MOFYA).The MOFYA aims to promote success stories of OFWs amidst the challenges of overseas employment and also seeks to highlight the role of OFW families as units in achieving socio-civic, educational, and professional success.#PartnerForChange#ComfortableLifeForAll

Posted by Presidential Communications (Government of the Philippines) on Wednesday, December 5, 2018