Supplies low for US shelters helping migrants as holidays near 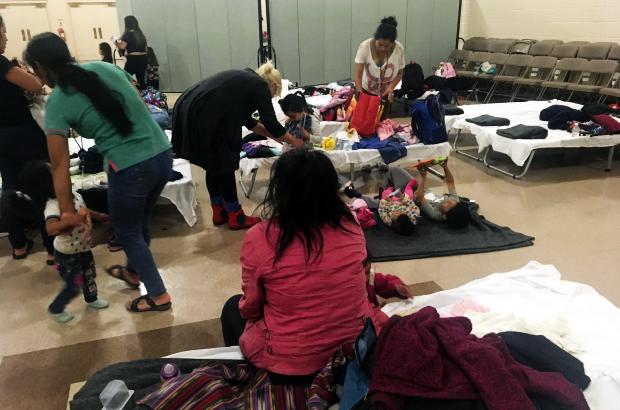 In this photo, taken Thursday, Nov. 29, 2018, Guatemalan migrant Cirila Alejandra Calelpu, 20, sitting, rests at the Cathedral of the Immaculate Heart of Mary migrant shelter in Las Cruces, New Mexico, after she and her 3-year-old daughter were released from U.S. Immigration and Customs Enforcement detention. Volunteer shelters along the U.S.-Mexico border say they are preparing for an expected surge of new immigrants seeking asylum in the U.S. who will need temporary housing as the holidays approach. (Photo by RUSSELL CONTRERAS / AP)

LAS CRUCES, New Mexico — An exhausted Alonzo Juan Jose sat still on a cot inside a shelter in southern New Mexico. For six days, the 24-year-old migrant from Huehuetenango, Guatemala, says he and his 5-month-old daughter, Allison Yajaira Juan Miguel, slept on a concrete floor while in U.S. Immigration and Customs Enforcement detention.

Now they were moments away from a good night’s rest following a nearly monthlong journey through Mexico, to an El Paso Port of Entry, to the refuge of the Immaculate Heart of Mary Catholic Cathedral in Las Cruces.

“I just want her to sleep,” Juan Jose said in Spanish as he rocked his daughter.

More migrants like the father and daughter duo are coming. Shelters run by volunteers in the U.S. say they are getting hit with an expected surge of new migrants seeking asylum in the U.S. who need temporary housing.

Nonprofit groups and churches — especially along the U.S.-Mexico border — are racing to get donated clothes, diapers, cots and meals for Central American migrants as the holidays approach and resources begin to dwindle.

The move comes as Trump administration in recent weeks has been releasing detained immigrants from Central America at a quicker pace than previously, putting a strain on shelters from San Diego to South Texas.

Shelters say ICE is no longer helping migrants with travel plans and is now releasing them from custody whether the migrants have places to stay or not.

In some case, volunteers are picking up migrants from train and bus stations after getting dropped off by immigration officials. Other times, shelters are getting surprised by busloads of migrants at their front doors.

A temporary shelter in San Diego has housed more than 1,500 asylum seekers since opening in October for people who are released by immigration authorities pending the outcome of their cases in immigration court, Kate Clark, an immigration attorney at Jewish Family Service of San Diego, said last week.

Immigration and Customs Enforcement began releasing more people before they could arrange travel to family and friends in other parts of the country, she said.

One day last week, ICE released nearly 100 people, bringing the number of migrants staying at the shelter to 178.

“We are responding to this crisis in real time,” California Gov.-elect Gavin Newsom said alongside Clark at a news conference.

Church leaders in the Phoenix say ICE has released about 5,000 migrants in the last two months to local churches. They say they have had to scramble to find diapers, clothing and food at the last minute. Most of the migrants dropped off at churches or shelters leave within a day or two.

ICE spokeswoman Leticia Zamarripa in El Paso said the agency doesn’t have family detention centers in the city. She did not respond to questions from The Associated Press.

Previously, ICE officials have said the agency lacks the resources to house the growing number of migrant families crossing into ports of entries in California, Arizona and Texas, and they have begun releasing them to nonprofit shelters and churches in the area.

Sylvia Corona, one of the volunteer coordinator at Immaculate Heart of Mary, said the network of shelters in southern New Mexico and West Texas believes the demand will continue to grow in the coming weeks.

“I think we’re going to see hundreds of families needing places to stay,” Corona said. “We’re opening up two more shelters soon. We’re letting them stay in our own homes if we have to, but we’ll find something.”

In the meantime, Immaculate Heart of Mary and others have set up Amazon.com registries to facilitate donations like baby clothes, paper plates and coats. Annunciation House, an immigrant shelter in El Paso, Texas, is asking for packets of underwear and socks.

The shelters house the migrants until they are able to make other travel arrangements.

The call for donations has hit communities far from the border and has used the migrant caravan to highlight the growing need, although not all migrants are connected to the caravan that has garnered international attention.

Last week, for example, the Berkeley City Council in Berkeley, California, voted to donate money to provide food, shelter and basic needs to caravan members detained at U.S. ports of entry or traveling to immigration hearings.

During a recent evening at Immaculate Heart of Mary, Cirila Alejandra Calelpu, 20, of Huehuetenango, Guatemala, selected donated clothes for her and her daughter Lucia Tojen Calel, 3.

The pair had just been released from a ICE detention center following a monthlong journey north. Like Juan Jose, she was fleeing gang violence.

“I’m going to Florida tomorrow to be with my sister,” Calelpu said while fighting off a cold. Children around her played with donated toys while other mothers combed through piles of free clothes.

Juan Jose was headed to Birmingham, Alabama, to join his brother. “At least tonight, I get to take a shower,” Juan Jose said before closing his eyes.
His 5-month-old daughter then fell asleep in his arms as the pair lied on a cot. She began to snore. “Well,” he said. “Maybe I won’t.” /atm