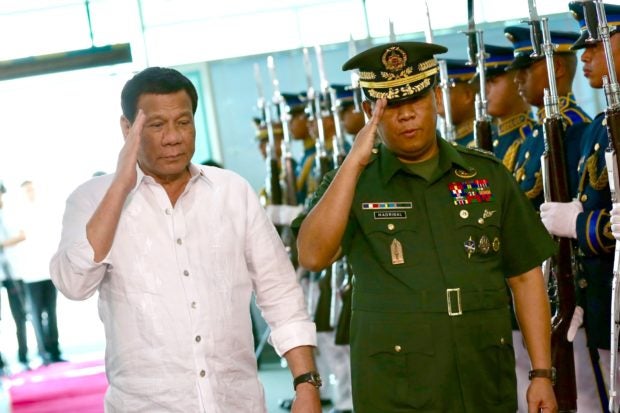 President Rodrigo Duterte is accorded foyer honors on his arrival at the Francisco Bangoy International Airport in Davao City on Sept. 8, 2018 after his official visits to the State of Israel and Hashemite Kingdom of Jordan. Accompanying the President is Lt. Gen. Benjamin Madrigal Jr., chief of the Eastern Mindanao Command (EastMinCom). (Photo by RICHARD MADELO / Presidential Photographers Division)

Eastern Mindanao Command (Eastmincom) chief Lt. Gen. Benjamin Madrigal Jr. is the next chief of staff of the Armed Forces of the Philippines.

Madrigal will replace Gen. Carlito Galvez Jr., who will reach the mandatory retirement age of 56 on Dec. 12.

The Inquirer obtained a copy of Madrigal’s appointment paper, signed by President Rodrigo Duterte, on Wednesday.

“I wish to inform you that, per your letter-endorsement and in accordance with the recommendation of the chief of staff, Armed Forces of the Philippines and chair, AFP board of generals, pursuant to Republic Act No. 9188, the designation of Lt. Gen. Benjamin Madrigal Jr. … vice Gen. Carlito Galvez Jr. … is hereby approved effective Dec. 12, 2018,” the letter read.

Defense Secretary Delfin Lorenzana earlier said that Madrigal, a member of the Philippine Military Academy “Sandiwa” Class of 1985, was the most senior among the recommendees of the board of generals.

Madrigal’s closest contender was Army chief Lt. Gen. Macairog Alberto. Both had been assigned in Davao, the President’s home region.

Madrigal took the helm of the Davao-based Eastmincom in November 2017, after Gen. Rey Leonardo Guerrero was appointed chief of staff. 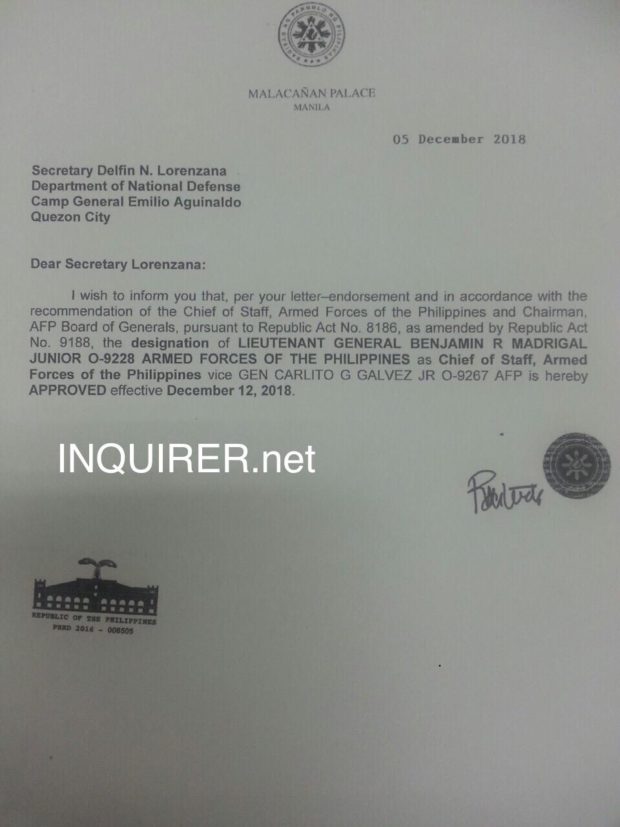