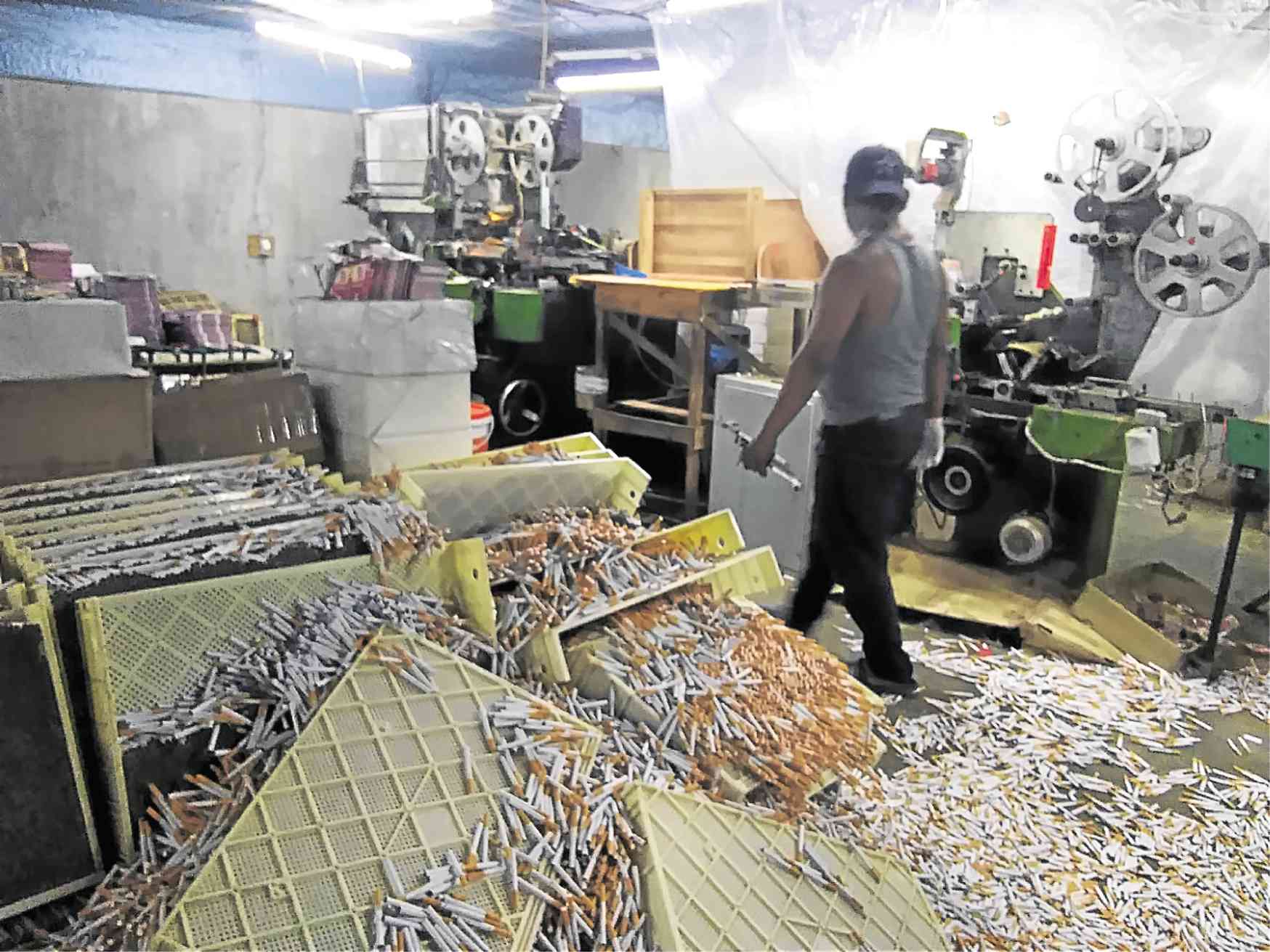 CRACKDOWN The cigarette factory that the government shut down in the farming town of Bugallon in Pangasinan may be supplying retailers around the country, the National Bureau of Investigation says. —CONTRIBUTED PHOTO

BUGALLON, Pangasinan — The National Bureau of Investigation on Monday said the volume of raw materials and scale of production at an illegal cigarette factory here suggested it was supplying the whole country with fake cigarettes.

Rodolfo Ignacio Jr., executive officer of the NBI intellectual property rights division, said Philip Morris Fortune Tobacco Corp. (PMFTC), a leading cigarette manufacturer in the country, had alerted the Bureau of Internal Revenue (BIR) about the proliferation of fake cigarettes in the market.

On Nov. 28, the NBI helped a BIR strike team shut down the illegal cigarette manufacturing operation in this agricultural town.

The factory was producing fake Marlboro and More cigarettes, the brands carried by PMFTC.

On Monday, NBI and BIR personnel began hauling equipment used in the manufacture of cigarettes from a building at Barangay Portic here.

They also loaded in 15 trucks of raw materials stored in a rented warehouse at Barangay Malabago in Mangaldan town.

The machines, raw materials and finished products would be brought to a BIR warehouse in Porac town, Pampanga province.

Two weeks ago, the BIR raided six convenience stores in Sta. Barbara town which sold fake cigarettes that could have come from the Portic factory, according to a BIR official.

The factory was said to be churning out daily about 200 boxes, each with 500 packs of fake brand cigarettes. Since each cigarette pack carried a fake P35 tax stamp, losses in taxes could amount to P3.5 million daily, officials said.

Five Chinese nationals were among the factory workers arrested by the government team in Bugallon.

In August, 17 Chinese were also involved when the Bureau of Customs raided a warehouse in Gapan City in Nueva Ecija province and confiscated fake cigarettes worth P200 million.

The Gapan warehouse stored raw materials and equipment which could produce 400 boxes of cigarettes a day.

In April, BIR Commissioner Caesar Dulay said the BIR had started addressing the proliferation of smuggled fake cigarettes because local cigarettes had become expensive due to excise imposed by the Tax Reform for Acceleration and Inclusion Act, or the TRAIN law.

The law raised the unitary excise on cigarettes to P32.50 per pack from P30 last year.