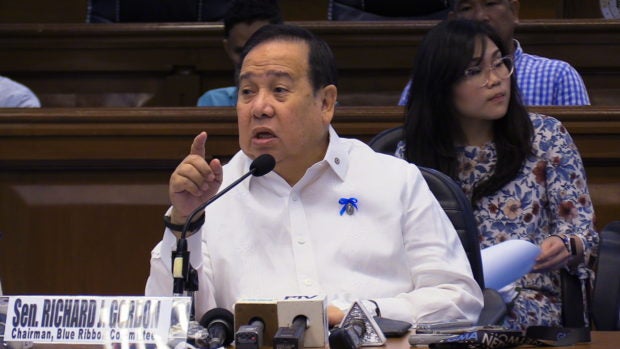 “I’m aware of a racket going on now where Chinese folks are opening bank accounts arranged by agents who have ACRs [alien certifcates of registration] and the banks are cooperating to open accounts without knowing their customer,” Gordon said on Monday during a hearing on the massive smuggling shabu into the country.

“I intend to open an inquiry into this. Pinapahirapan niyo lahat ng tao,” he added, addressing a branch manager of Banco de Oro.

[You are burdening everyone.]

“We were informed, Mr. Chair, and as a matter of fact, we already issued an advisory on those activities where account holders are being used and other Filipinos are being used to open accounts,” Racela said.

[It’s more of a “let me borrow your account” setup.]

For her part, the branch manager of BDO Mall of Asia Shell Residences, Priscilla Tan, said: “I’m not aware of that practice, but as far as I’m concerned we do not allow that. We do not practice that in our branch.”

Gordon said that there would be no pardon for banks and bank agents found guilty of such practice.

[If the accomplices of the Chinese nationals entering their names in bank or in the Securities and Exchange Commission or the Bureau of Immigration, they should not be pardoned.]

[We’re talking about drugs here — billions of pesos worth of drugs.] /atm