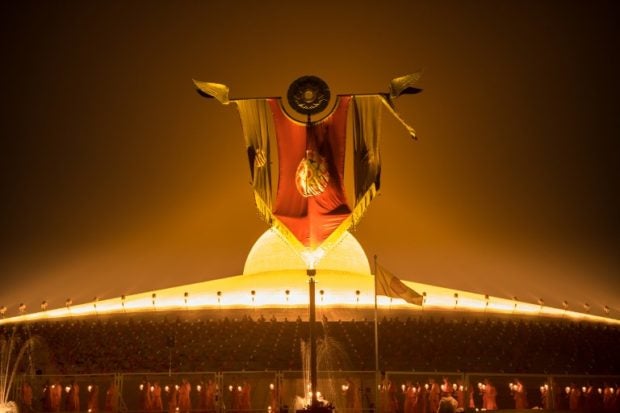 Buddhist monks carry lit candles after evening prayers to mark Makha Bucha Day at Wat Phra Dhammakaya temple, near Bangkok on March 1, 2018. – Makha Bucha Day is held in celebration of the teachings of the Lord Buddha on the full moon of the 3rd lunar month in the Buddhist calendar. AFP

The foundation was implicated in a embezzlement case involving a local credit union and was part of an apparatus that defrauded investors of hundreds of millions of Thai Baht.

The DSI also wants the prosecutors to ask the courts to confiscate the foundation’s Bt13-billion assets, DSI chief Pol Colonel Paisit Wongmuang said yesterday, according to the Nation Newspaper.

The foundation – established on July 30, 2004 – is under the patronage of Dhammakaya Temple’s ex-abbot Phra Dhammachayo, who faces an arrest warrant over money-laundering charges.

The elusive monk and his accomplices have been accused of accepting money from the ex-boss of a credit union who is in jail for stealing billions of baht from the cooperative.

The DSI had investigated Supachai and his accomplices over embezzlement charges, and then looked into Phra Dhammachayo and other people’s alleged role in money laundering and possession of stolen articles.

Since initial investigation uncovered transactions linked to the foundation – which was accused of constructing facilities for the temple using money that was allegedly swindled out of the credit union – the DSI launched another probe, results of which were made public on Thursday.

According to the findings of the report, investigators found the foundation and its board, led by billionaire telecom tycoon Boonchai Bencharongkul’s younger sister Wanna Chirakiti, guilty of conspiring to launder money and also violating the foundation’s objectives.

Hence, he said, the DSI is recommending that prosecutors disband the foundation and seize its assets, including the assets already confiscated by the Anti-Money Laundering Office.

The 2,000-rai Dhammakaya Temple situated in North Bangkok has drawn criticism and controversy over the past two decades. The temple is accused by critics of placing to great an emphasis on material wealth and for its elaborate and lavish religious ceremonies. The temple and its abbot has also sparked criticism for its close ties to politicians.

Thailand’s ruling military government has attempted to arrest the abbot several times over the past four years but have been stopped by protesters and monks at the temple gates.