UP president rejects ‘threats’ by regent vs Ateneo players

University of the Philippines (UP) president Danilo Concepcion has disowned the controversial posts of Regent Frederick “Spocky” Farolan that threatened players of Ateneo de Manila University (ADMU) with injury in Game 2 of the UAAP Finals.

In a statement late Sunday night, Concepcion said that the university denounced the comments and the posts of Farolan, who is a member of the Board of Regents of UP.

“While this regent has deleted the post and has apologized for its contents, claiming that they were made in jest, I wish to make it clear the University of the Philippines takes these statements seriously and dissociates itself from the post and from the actuations of this regent, matters which I intend to take up with the Board of Regents,” Concepcion said.

“They do not in any way represent the values of the University, and the high esteem in which it holds sportsmanship, fair play, and civility in athletics as well as in other aspects of our academic and social life,” he added.

Tensions between supporters of UP and the ADMU rose Saturday during Game 1 of the basketball championship game of the University Athletic Association of the Philippines.

The Blue Eagles bested the Fighting Maroons with a score of 88-79, leading the best of three series. Game 2 is set for Wednesday.

READ: Ravena, Nieto push Ateneo past UP in Game 1 of UAAP Finals

“Sayang hindi kumpleto ang players ng Ateneo sa Wednesday. Tatlo injured. Pili na kung sinu-sino mga yon,” (It would be a shame that Ateneo would lack players on Wednesday. Three would be injured. Take your pick who those would be) he said. 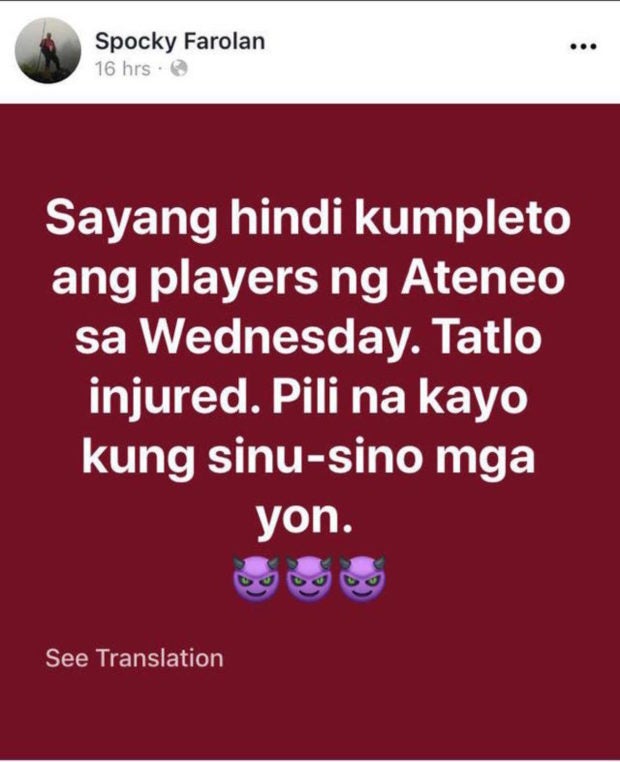 Farolan suggested that a “composite strike team for all UP fraternities” form a “solidarity” to inflict damage to the chosen three players of ADMU.

He added that a brawl between fraternities from both universities take place during the halftime show, calling it an “old school suntukan.” 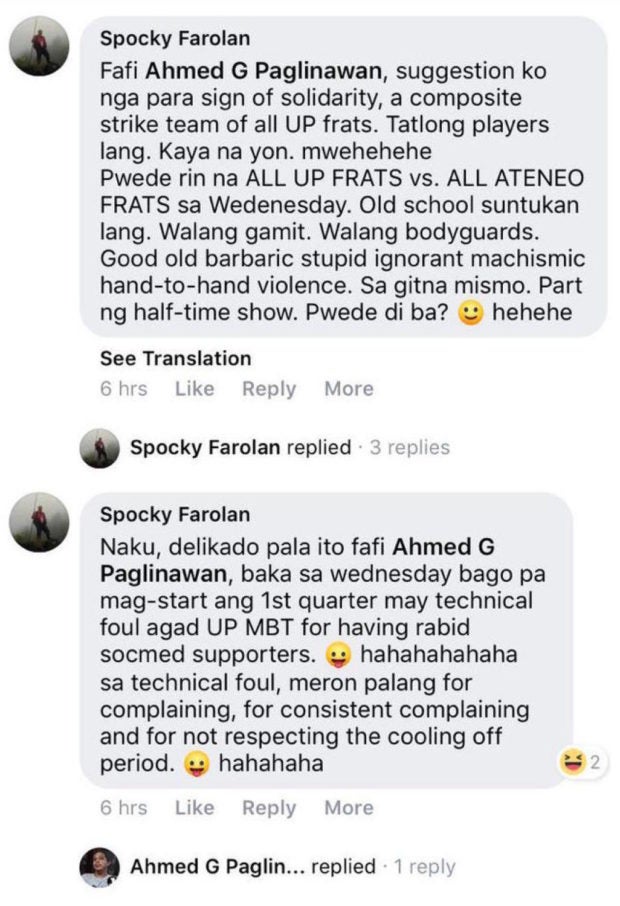 Farolan said UAAP officials who would see his post could give UP a technical foul for having “rabid social medial supporters.”

Farolan later deleted his statements, saying these could get misinterpreted.

“To be clear, as I mentioned in a comment there, violence, especially frat-related ones are barbaric, machismo, stupid and arrogant. There was sarcasm in that comment which may not have been immediately and easily perceived by some,” he said.

“Anyway, deleted the post just in case some interpret it wrong. Though sayang talaga if any of the teams lack members this Wednesday due to injuries,” he added. /cbb

I posted something which might be construed as advocating violence and frat violence.To be clear, as I mentioned in a…

Read Next
Senate wannabes offer ‘solutions’ to traffic
EDITORS' PICK
QC gov’t to give free COVID-19 antigen test to residents on January 19
DOH: 28,471 new COVID-19 cases in PH; active cases now 284,458
Acer starts the year off strong with the Aspire Vero National Geographic Edition
Over 3 Million worth of prizes to be won at Smart Padala’s SENDali Manalo Promo!
WHO urges manufacturers to provide COVID-19 vaccine data
Gear up and get ready to play with Yamaha Mio Gear
MOST READ
Cold-case investigation names surprise suspect in Anne Frank’s betrayal
On Day 2 of implementation, gov’t says workers now exempt from ‘no vax, no ride’ policy
Guevarra to Acosta: Obey rules on unvaccinated
Czech anti-vax singer dies after deliberate infection
Don't miss out on the latest news and information.