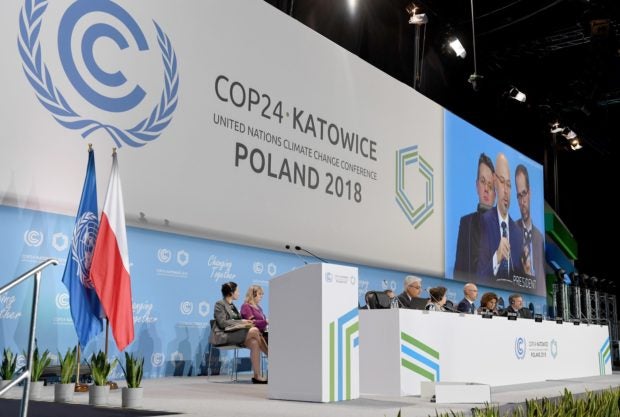 Polish Secretary of State in the Ministry of Environment, Government Plenipotentiary for COP24 Presidency, Michal Kurtyka (on screen) speaks during the inaugural session at the 24th Conference of the Parties to the United Nations Framework Convention on Climate Change (COP24) summit on December 2, 2018, in Katowice, Poland. AFP

KATOWICE, Poland – As delegates from about 200 countries convened on Sunday for the start of United Nations climate talks, civil society organizations said negotiators must be reminded that the discussions should revolve around the people and the planet, amid high political tensions and divides between different nations.

Set in Katowice, the heart of this coal-mining country, the 24th Conference of the Parties (COP24) to the United Nations Framework Convention on Climate Change is expected to come out with the rulebook of the Paris Agreement, a landmark climate accord that nations reached in 2015.

Harjeet Singh, who leads the climate advocacy of group ActionAid, said that the high-level summit should be ultimately about helping and protecting the people, particularly those who are most vulnerable to the adverse impacts of a rapidly warming world.

“These talks have been embroiled with blame game and had largely shifted away from the main goal of the convention and the Paris Agreement, which is people and planet,” he said in an interview.

Heated debates are expected to dominate the two-week climate talks, seen as the most important negotiations after the successful COP21 in Paris, France. It is also seen that political divides between rich and developing countries would emerge clearly during the negotiations, particularly on issues such as climate finance.

Amid worsening climate-related events, such as stronger typhoons and harsher droughts, Singh said that loss and damage cannot anymore be set aside in the talks, much less in the rulebook.

One of the most controversial issues in the conference, loss and damage refers to the irreversible effects of climate change, including loss of lives and threats to biodiversity.

During last year’s conference in Bonn, Germany, it remained a tricky subject, with rich countries deflecting discussions on the creation of a fund that will be used to address the adverse impact of climate change, particularly to vulnerable countries, including the Philippines.

“This [conference] is not just about mitigation or about renewable energy,” Singh said. “Even if we stop our emissions now, we will still see the impacts.”

“Loss and damage cannot be a bargaining chip here… We have no option but to have it [in the rulebook],” Singh added. /cbb

Read Next
‘Gov’t, not the Chinese, to blame for lack of jobs’
EDITORS' PICK
DOH says COVID-19 cases plateauing, but public shouldn’t be ‘complacent’
Look Through: The fate of impounded stray dogs
23,000 cops to be deployed nationwide for school reopening
What to watch out for when selecting a video surveillance solution
House energy committee chair Arroyo bats for cheap electricity
Unleash the photographer in you this World Photography Day with vivo smartphones
MOST READ
Solons file resolutions seeking probe on ABS-CBN, TV5 merger
Korina Sanchez reunites with former ABS-CBN co-anchors Julius Babao, Cheryl Cosim
Light therapy could be the answer to your sleep problems
Sharon Cuneta asks for prayers for friend in ICU who suffered silent stroke
Don't miss out on the latest news and information.