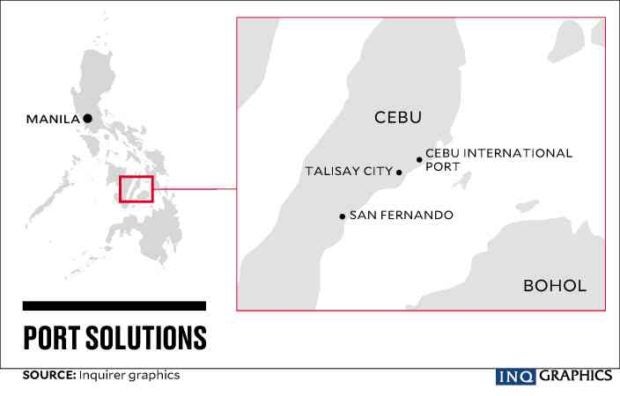 CEBU CITY — Three international port projects are in the pipeline for Cebu province although it still remains to be seen if these will solve port congestion at the North Reclamation Area in Cebu City.

The P10-billion Cebu International Container Port (CICP) by the Cebu Port Authority (CPA) in the northern town of Consolacion has yet to start construction despite already securing funding through official development assistance from the South Korean government.

Karen Gonzales, CPA senior corporate lawyer, said her office was still awaiting word from the Department of Transportation on the project’s implementation.

She said one of the conditions of the loan agreement, which had not yet been fulfilled, was an access road network leading to the port site and relocation area for displaced residents.

No update has been received from the Department of Public Works and Highways (DPWH), which was supposed to build the road network.

Among the projects expected to complement the CICP in Consolacion is the P50-billion Metro Cebu Expressway Project — a 74-kilometer expressway, which would connect Naga City in the south to Danao City in the north.

The national government has already allocated P600 million for the first phase of the expressway project. The DPWH in Central Visayas is currently doing surveys before civil work can start.

While the CICP in Consolacion, a government project, is still at a standstill, other private investors are also planning their own international port projects in other parts of the province.

It could cater to containers and bulk cargo operations.

“It will augment the flow of imports and exports,” said Johnny Ng, owner and operator of several container yards and ports in Mindanao, in a statement.

Ng and Lucio Co, owner of supermarket chain Puregold, are two of the majority owners of CSHCTC.

The CSHCTC had said the planned port would offer an alternative to the congested CICP.

The project, which recently broke ground, had already been approved by the CPA.

Ground work was to begin early next year and completion was seen in 2022.

Another privately funded international port project is being proposed in the southern town of San Fernando.

First Sangat SF International Port Corp. is investing P12 billion on the port project, which would require the reclamation of around 23 hectares of sea.

Cebu business leaders said the international ports were a welcome development but must be backed by studies and data.