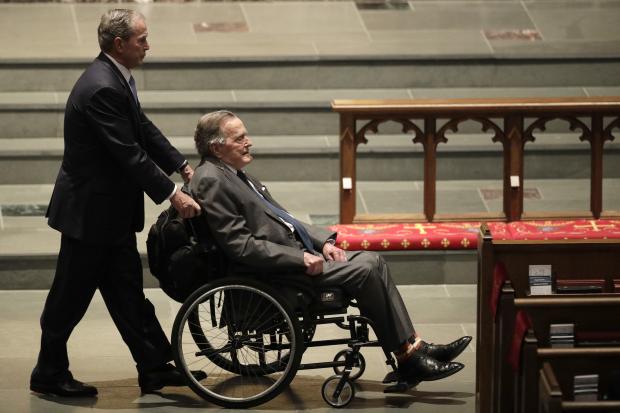 Politicians and celebrities praised former US President George H.W. Bush, who died Friday, Nov. 30, 2018, at the age of 94:

(He) “was a man of the highest character. The entire Bush family is deeply grateful for 41’s life and love, for the compassion of those who have cared and prayed for Dad.” — Former President George W. Bush

“George H.W. Bush’s life is a testament to the notion that public service is a noble, joyous calling. And he did tremendous good along the journey.” — Former President Barack Obama.

“The legacy of George H.W. Bush will be forever etched in the history of America and the world. It is a lifelong record of selfless patriotic service to our nation.” — James A. Baker III, secretary of state in the Bush administration.

“Through his essential authenticity, disarming wit, and unwavering commitment to faith, family, and country, President Bush inspired generations of his fellow Americans to public service_to be, in his words, ‘a thousand points of light’ illuminating the greatness, hope, and opportunity of America to the world.” — President Donald Trump.

“I will be forever grateful for the friendship we formed. From the moment I met him as a young governor invited to his home in Kennebunkport, I was struck by the kindness he showed to Chelsea, by his innate and genuine decency, and by his devotion to Barbara, his children, and their growing brood.” — Former President Bill Clinton.

“The world has lost a great leader; this country has lost one of its best; and I have lost one of my dearest friends. I am heartbroken.” — Brent Scowcroft, Bush’s national security adviser.

(George H.W. Bush) tried to “create a new international order based on justice and equality among nations” … he never “forgot the Kuwaiti people and will remain in their memory.” — Kuwait’s ruling emir, Sheikh Sabah Al Ahmad Al Sabah

“Remembering President George H.W. Bush and the Americans With Disabilities Act. Millions of with Disabilities and who are Deaf or HOH (hard of hearing) lives have been changed for the better as a result of his signing this landmark legislation. My condolences to his entire family RIP #georgehwbush.” — Actress Marlee Matlin, who herself is deaf, via Twitter

“President George H.W. Bush was the real deal. We fought but he was gracious enough to accept my apology. Through his daughter Dorothy, my friends Ron Kaufman and Mary Matalin, I got to know him. Rest in Peace #georgehwbush” — Democratic political strategist Donna Brazile, via Twitter

“I will never forget George H.W. Bush and President Clinton meeting me in my old hometown of New Orleans to show support and raise money after Hurricane Katrina. I send my love to his family tonight.” — Ellen DeGeneres, via Twitter

“As an American envoy to Beijing, as CIA Director, as Vice President for eight years and then four years as President, George H.W. Bush’s statesmanship played a key role in helping to end the Cold War, which bought democracy to millions of people in Europe and diminished the threat of nuclear war. George H.W. Bush was a strong supporter of the international rules-based system, the rule of law and democratic values.” — New Zealand Prime Minister Jacinda Ardern

“It was a time of great change, demanding great responsibility from everyone. The result was the end of the Cold War and nuclear arms race. (My wife, Raisa, and I) deeply appreciated the attention, kindness and simplicity typical of George and Barbara Bush, as well as the rest of their large, friendly family.” — Former Soviet premier Mikhail Gorbachev

“He was in fact the first American President that I was privileged to meet. I recall being deeply touched by your father’s concern for the Tibetan people and the situation in Tibet. It is truly admirable to have lived over 94 years. While nothing can replace the loss of a father, we can rejoice in the fact that his was a meaningful life, dedicated to public service. I commend your parents for encouraging their children, including you my dear friend, to devote yourselves to the service of others.” — Tibetan spiritual leader, the Dalai Lama

(President George H.W. Bush was) “a great statesman and a true friend of our country” whose “ethos of public service was the guiding thread of his life and an example to us all … in navigating a peaceful end to the Cold War he made the world a safer place for generations to come.” — British Prime Minister Theresa May

(He) “saw America’s obligation to the world and honored it. I feel privileged to have worked with him, and even more privileged that he became a lifelong friend. He was, quite simply, one of the most deep-down decent people I have ever known.” John Major, British Prime Minister from 1990-1997

“We are mourning a great statesman and a friend of Germany … (Bush) courageously seized the opportunity to end the Cold War … he is also an architect of German unity. He supported it from the beginning without reservations. We will never forget that.” — Heiko Maas, German foreign minister

“The Palace is deeply saddened by the news of the passing of former President George Herbert Walker Bush of the United States of America. Mr. George Bush, Sr. … was credited for his foreign policy which saw the end of the Cold War. He stood for freedom and his words about the subject ring a bell until this day when he said, ‘The anchor in our world today is freedom, holding us steady in times of change, a symbol of hope to all the world.’ On behalf of the Filipino nation and people, we wish to convey our condolences and prayers to the family and friends of Mr. Bush, as well as to the government and the people of the United States of America.” — Salvador S. Panelo, chief presidential legal counsel and presidential spokesperson

“Former President George H. W. Bush was passionate about strong relations between India and USA. His presence will be sorely missed. May he rest in peace.” —Indian Prime Minister Narendra Modi, via Twitter