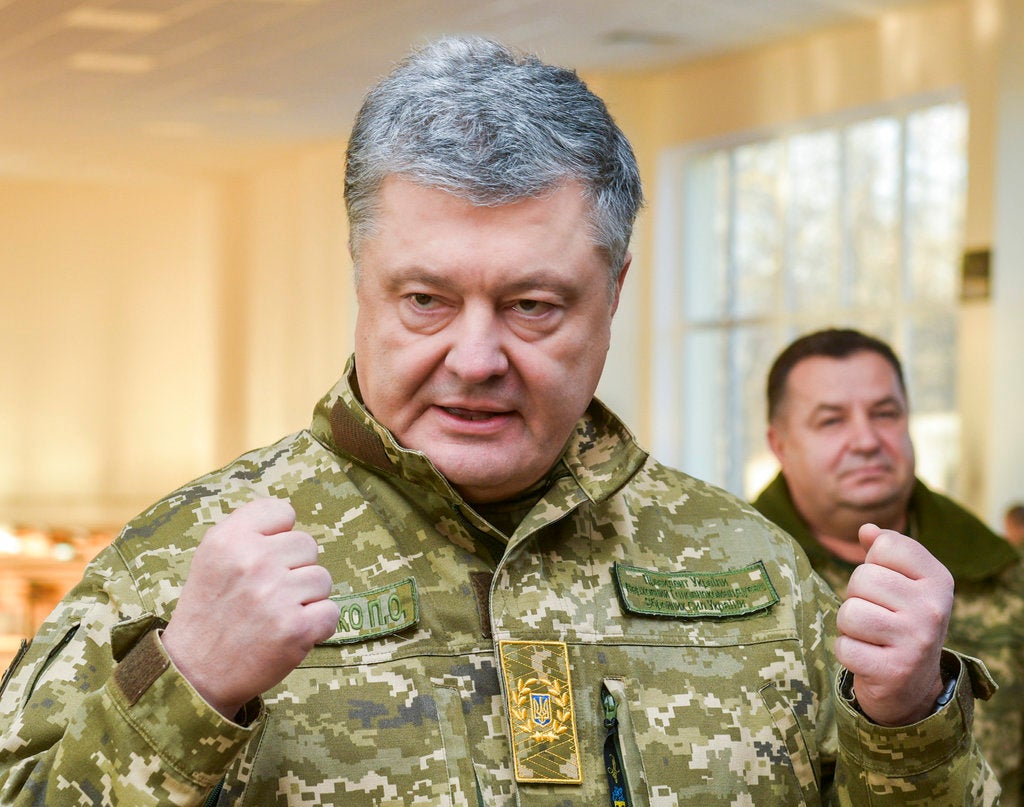 Ukrainian President Petro Poroshenko speak to soldiers during a visit to a military base in Chernihiv region, Ukraine, Wednesday, Nov, 28, 2018. Russia and Ukraine traded blame after Russian border guards on Sunday opened fire on three Ukrainian navy vessels and eventually seized them and their crews. The incident put the two countries on war footing and raised international concern. (Mykola Lazarenko, Presidential Press Service via AP)

Ukraine President Petro Poroshenko said Friday that the country has barred Russian men between 16 and 60 years old from traveling to the country.

In a tweet, Poroshenko explained the restrictions on Russian travelers have been taken in order to prevent the Russians from forming “private armies” fighting on Ukrainian soil.

This move comes as the long-simmering conflict between the two nations escalated in the Black Sea on Sunday. Russian border guards opened fire on and captured three Ukrainian vessels and their 24-member crew.

A Russian government-appointed ombudswoman said the three commanders of the Ukrainian vessels captured near the Russia-annexed Crimean Peninsula were being transferred to Moscow for interrogation.

Russia said the Ukrainians had violated its border while Ukraine said its ships were acting in line with international maritime rules.

As this developed, the Ukrainian intelligence agency was searching the home of the father superior of Kiev’s biggest and oldest monastery, which is part of the Russian Orthodox Church.

Ihor Guskov, chief of staff of the SBU intelligence agency, told reporters on Friday that its officers are searching the home of Father Pavlo, who leads the Pechersk Monastery in Kiev. He said the cleric is suspected of “inciting hatred.”

The Ukrainian church, which has been part of the Russian Orthodox Church for centuries, moved close to forming an independent church — fueled by the conflict with Ukraine’s Orthodox communities earlier this year.