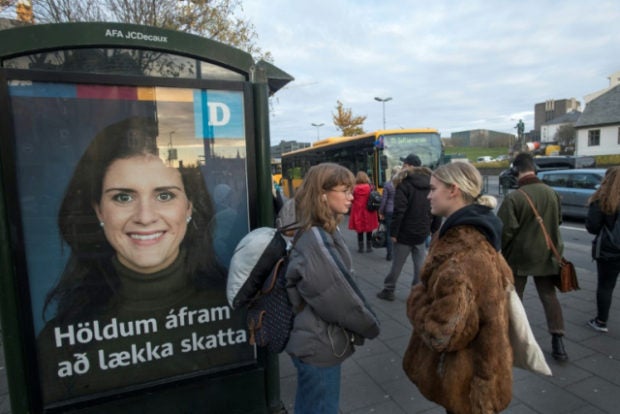 A sign that Icelanders still value their language: candidates for election make sure they use it. This poster says in Icelandic “Continue to lower taxes”. Image” AFP/Halldor Kolbeins

Two centuries ago experts predicted that Icelandic would be a dead language by now. But the doomsayers can eat their words: Icelandic is alive and kicking despite an onslaught of English brought on by modern technology.

Currently spoken by the 355,000 inhabitants of this North Atlantic island, Icelandic has repeatedly come under threat through the ages — following migrations, invasions by Norway and Denmark from the 16th to the early 20th centuries, and the Industrial Revolution.

But it has always survived, with the written language little changed since the 11th century.

With just a little guesswork, an Icelander today can read the Icelandic Sagas, medieval literary masterpieces written in Old Norse in the 13th and 14th centuries.

Yet English usage has in recent decades skyrocketed in Iceland — as around the world — thanks to the dominance of American pop culture as well as the adoption of modern technology such as the internet, YouTube and smartphones with lightning speed.

Visitors to the capital Reykjavik need only ask locals for directions to quickly discover that Iceland is in fact bilingual.

For youths here, speaking English is simply a matter of necessity.

“I have to be able to read English because it’s everywhere and it’s universal,” 11-year-old Sigthor Elias Smith says— in Icelandic.

Here, people watch videos and play games on their laptops, tablets and smartphones in English for the most part. Like in other Nordic countries, dubbing is almost non-existent.

And Icelandic is glaringly absent in the online world.

“I watch YouTube a lot, I learn a lot of English that way, and also on Netflix,” says Sigthor’s friend Eva Bjork Angarita, 12.

Icelandic in the digital age

Amid some concern that English is too prevalent, Iceland has adopted several measures to promote its own language.

In 1996, the government designated November 16 as Icelandic Language Day, aimed at drawing attention to its contribution to national identity and culture.

In 2011, a new law recogniezd Icelandic as the country’s official language.

And Education, Culture and Science Minister Lilja Alfredsdottir announced in September that authors or editors publishing books in Icelandic would have 25 percent of their expenses reimbursed, in a bid to increase the diversity of books available in Icelandic.

To counteract the dominance of English in technology, Alfredsdottir has also earmarked 2.4 billion kronur (around 17.5 million euros, $19.3 million) to develop Icelandic versions of voice recognition services for virtual personal assistants such as Apple’s Siri and Amazon’s Alexa.

Sigthor and Eva’s Icelandic teacher, Solveig Reynisdottir, is among those concerned about the rise of the Bard’s tongue.

She worries that the tsunami of English that children are exposed to online is affecting their Icelandic vocabulary.

“The children sometimes lack words because there are many they’ve never heard,” she laments as she hands out a language comprehension assignment to her 23 students.

“The technological changes are a real challenge,” Alfredsdottir admits.

Eirikur Rognvaldsson, an Icelandic professor and linguist at the University of Iceland, agrees.

He acknowledges that the ubiquity of English is not unique to Iceland, but notes that in contrast to other countries, many young Icelanders choose to live abroad.

“Young people in Iceland … don’t necessarily see Iceland as their home in the future. They want to go abroad, study and live abroad. It seems their connections to their country and language are not as strong as they used to be.”

A 2016 Forbes study showed that 11.4 percent of Icelanders lived abroad, in sixth place of OECD countries with populations living overseas.

Others say the fears are unwarranted.

Icelanders are prolific writers. Some 1,600 books are published in print each year, according to Iceland’s National and University Library. That’s three times more per capita than in France.

“We shouldn’t be worried by a few red flags,” says Ari Pall Kristinsson, a researcher at the Arni Magnusson Institute for Icelandic Studies. “Cultural life in Icelandic is very dynamic today.”

And it is worth noting that English may be gaining ground orally, but it is not making its way into Icelandic dictionaries.

While English loanwords and slang regularly creep into other languages, Icelandic remains one of the world’s purest languages.

The government’s Icelandic Language Committee sees to that. It guards the language closely, working meticulously to devise new words with Icelandic roots when necessary.

For computer, it came up with “tolva”: a mix of “tala” (number) and “volva” (prophetess), to create the poetic “prophetess of numbers”.

“I don’t think Icelandic will disappear,” says Gudrun Kvaran, head of the committee.

“Two centuries ago, our famous Danish language experts predicted that Icelandic would be dead within 200 years. And yet we’re still speaking Icelandic today.” CC

With 39 new languages, another 1.25B people will now be able to use Google Maps