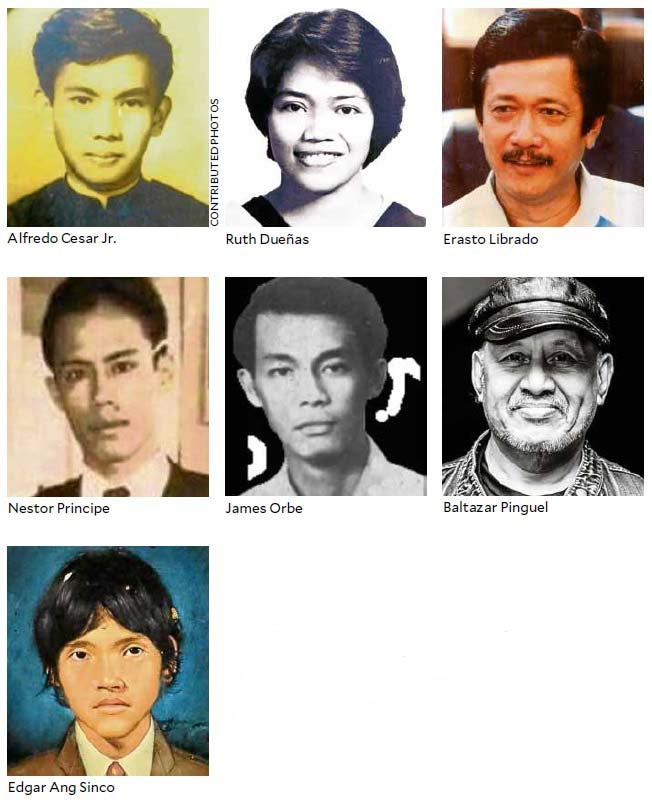 A farmers’ advocate, a seminarian-turned-underground rebel, a political activist, two student leaders, and two labor organizers are the latest heroes and martyrs to be honored today, Bonifacio Day, their names to be added to the Wall of Remembrance at the Bantayog ng mga Bayani in Quezon City.

The ceremonies, which are open to the public, will begin at 4 p.m., with former Sen. Aquilino “Nene” Pimentel Jr. as guest speaker.

Ang Sinco was only 19 when he was killed. A student leader at the University of Mindanao in Davao City, he was also a member of the Samahang Demokratiko ng Kabataan.

Like many student leaders at the time, he immersed himself among the poor. On Feb. 16, 1971, Ang Sinco was speaking at a student rally when a bullet felled him. He was regarded as Davao City’s first martyr in the fight against the Marcos dictatorship.

When martial law was declared, Cesar returned to Bolinao, Pangasinan, and worked with the local church. He later became a parish organizer in the Ilocos Sur parish of Fr. Zacarias Agatep (another Bantayog honoree).

Along with Agatep, he worked for the welfare of tobacco farmers and eventually joined the armed resistance. He and Agatep were killed in a dawn raid by the military.

Dueñas was a third year social work student at Ateneo de Davao when she joined the Concerned Citizens for Justice and Peace in Davao City. She became involved with labor unions and became a full-time labor organizer after graduation.

Dueñas was in a meeting with labor leaders at San Isidro, Bunawan, in Davao City when soldiers from the Philippine Constabulary raided the place they were in. Two unionists were shot outright, while Dueñas and five others were taken in a vehicle. Their bodies were found in a funeral parlor the next day.

Librado, a graduate of the University of Mindanao in Davao City, was a certified public accountant who studied law for two years. He worked in a bank and got married in 1971.  But union organizing became his calling and, with Hernando Cortez (also a Bantayog honoree), he plunged head on in creating a Mindanao-wide workers’ organization.

In December 1984, Librado and his wife Marlene were arrested, with Librado tortured and held in solitary confinement. Because of international pressure, the couple were released in 1985.

After the fall of the Marcoses in 1986, Librado called for the release of political prisoners, as well as justice for victims of martial law.  In 1992, he won as councilor of Davao’s first district, but served for only 54 days. He died of aneurysm in August that year.

From a military family

James M. Orbe’s father was a member of the US Armed Forces in the Far East during World War II, who later became chief of police in Iligan City. Four of Orbe’s 12 siblings also joined military service, but that did not stop this mechanical engineering student from joining student rallies protesting pre-board exam reviews and the commercialization of education.

Orbe went back to Iligan in 1970 to organize students, farmers, workers and Moro communities in the Lanao provinces. A year later, he left Iligan for Isabela in Luzon where he organized barrio folk to resist militarization during the Marcos dictatorship.  In a military raid in February 1974, he and his comrades were gunned down despite having raised their arms in surrender.

An honor student and scholar at the University of the Philippines, Pinguel became involved in several organizations, among them, the Kabataang Makabayan. The fiery speaker also became part of the 1971 Diliman Commune at UP.

Because of his underground political activities, Pinguel was arrested, tortured and detained twice.  The first time he was held in 1973, he and eight others later made a dramatic escape from Camp Vicente Lim in Laguna. He was again arrested and tortured in 1980, and detained for five years at Camp Bagong Diwa in Bicutan, Taguig.

Despite the release of several political prisoners in 1981 before the visit of Pope John Paul II, Pinguel was released only in 1985. He later helped build up the Bagong Alyansang Makabayan.

Narrowly escaping an abduction attempt, Pinguel accepted the offer of Amnesty International for a speaking tour abroad. He applied for political asylum in the United States, where he continued his advocacies in North America. He died of a heart attack in 2017 at 67.

Born in Bohol, Principe grew up in a tough neighborhood ruled by gangs and rogue policemen in Caloocan City. To protect themselves, Principe and his brothers learned martial arts, which enabled him to work abroad and tour the world.  He was in London in 1970 when he heard of the First Quarter Storm in Manila and decided to go home.

Principe enrolled in journalism at Lyceum of the Philippines where student activism was strong. Heeding the call to “learn from the masses,” he left school and lived in urban poor communities in Metro Manila. To avoid arrest in 1972 when martial law was declared, he went to the Cordilleras where he became known as Ka Wadi, the karate expert.

He died during a Philippine Constabulary operation. He was only 28. It is said that the soldiers cut off his head and presented it to their commander who ordered that it be brought back and buried with his body.

The local folk performed a cleansing ritual and buried Principe’s body in the mountain where it remains to this day.

The seven new honorees bring to 305 the names of heroes engraved on Bantayog’s Wall of Remembrance, a fitting tribute to those who risked life and freedom to oppose the authoritarian rule of then President Ferdinand Marcos.