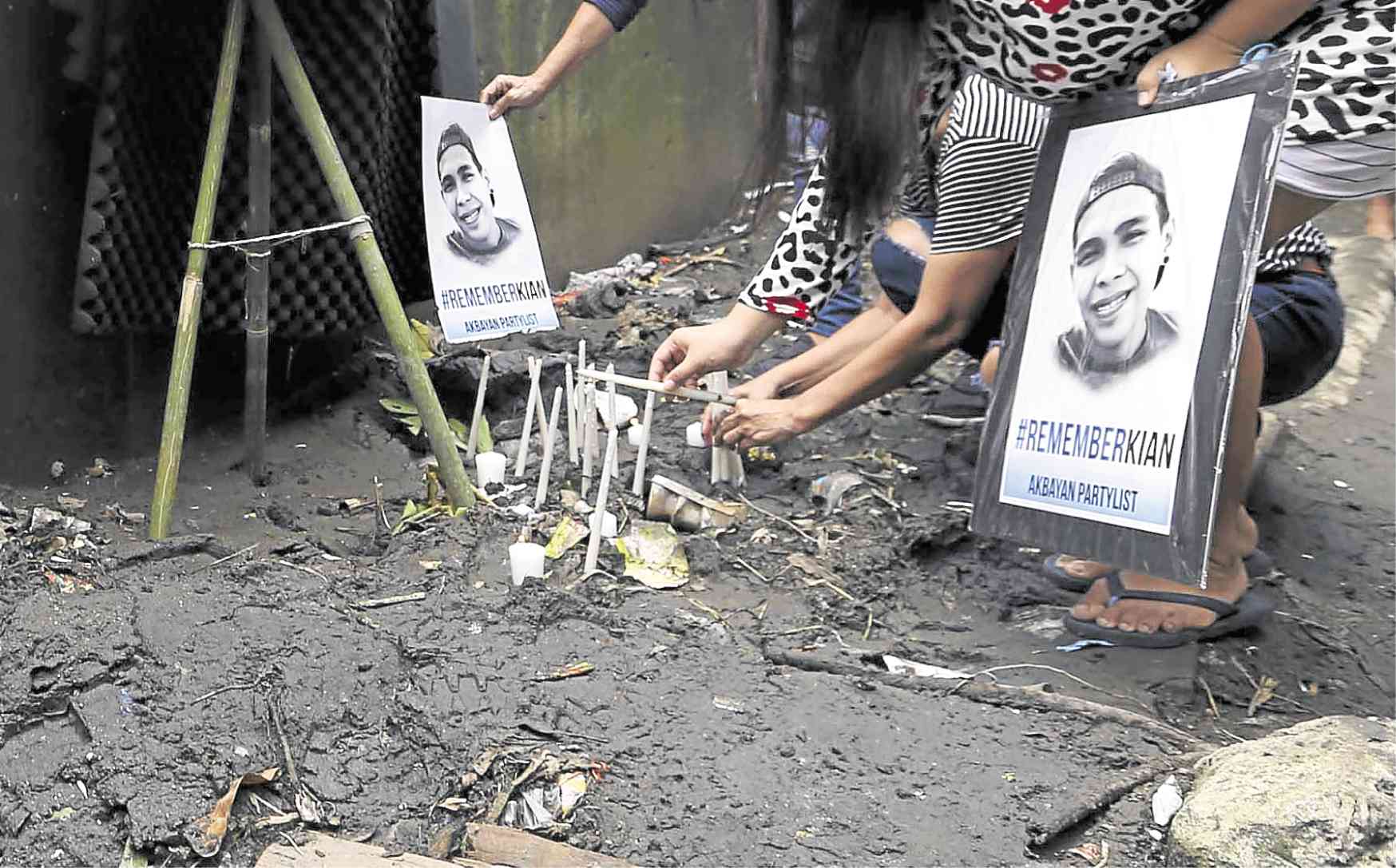 TRIUMPH OF JUSTICE The family of Kian delos Santos and supporters offer candles and prayers at the place in Caloocan City where he was killed by policemen, in this photo taken during the first anniversary of his death in August. LYN RILLON

The family of Kian Loyd delos Santos broke into tears, while lawmakers warned the authorities of accountability on Thursday after the Caloocan City Regional Trial Court (RTC) sentenced three police officers to up to 40 years in prison for the murder of the 17-year-old high school student in 2017, the first conviction in President Duterte’s brutal war on drugs.

“I feel so happy because this proves that my son was innocent and was never involved in drugs,” Delos Santos’ mother, Lorenza, told reporters after the promulgation of the decision.

“[Policemen] can be jailed for life if they do not stop their abusive practices,” she said.

Judge Rodolfo Azucena Jr. of the Caloocan City RTC Branch 125 declared PO3 Arnel Oares, PO1 Jeremias Pereda and PO1 Jerwin Cruz guilty of the killing of the teenager in a cul-de-sac at Barangay 160 in the city’s impoverished Libis Baesa District, on Aug. 16, 2017.

Azucena, however, found the three officers not guilty of the charge of planting a firearm and illegal drugs on the Grade 12 student. The prosecution, he said, failed to prove their guilt beyond reasonable doubt.

The officers have 15 days to appeal the decision. 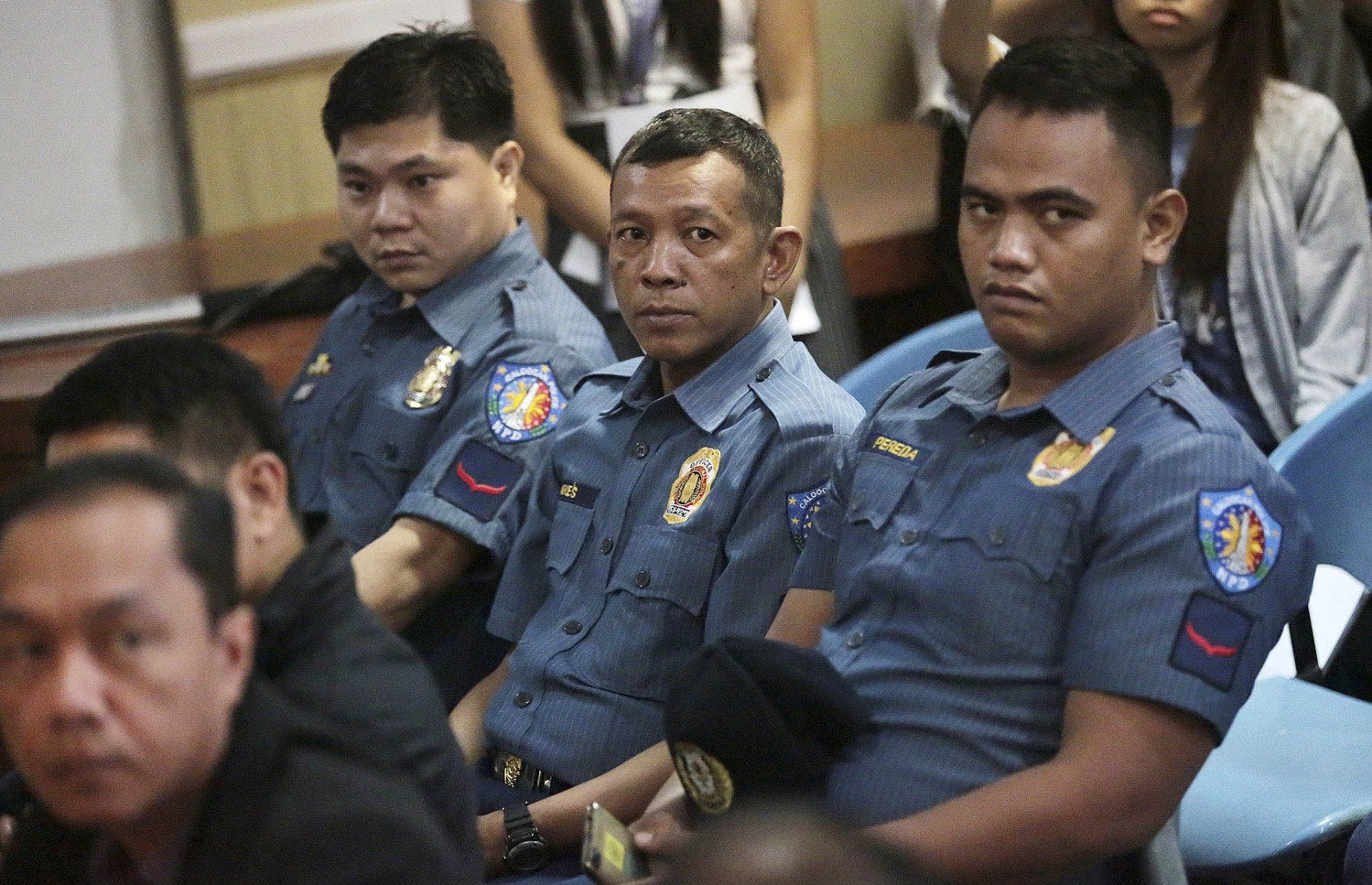 PO1 Jerwin Cruz, PO3 Arnel Oares and PO1 Jeremias Pereda, who were accused of killing Kian delos Santos, show up at the Department of Justice for the preliminary investigation of the case on Sept. 14, 2017.

The judge found merit in almost all the arguments and evidence presented by the prosecution.

“The court commiserates with our policemen who regularly thrust their lives in zones of danger in order to maintain peace and order. But the use of unnecessary force or wanton violence is not justified when the fulfillment of their duty as law enforcers can [be] effected otherwise,” Azucena said.

“A shoot-first-think-later attitude can never be countenanced in a civilized society. Never has homicide or murder been a function of law enforcement. The public peace is never predicated on the cost of human life,” Azucena said in his 35-page decision, ending a trial that lasted six months.

It is the first conviction in  what human rights advocates say is an extrajudicial killing (EJK) carried out by state agents in the 29-month war on drugs, which has seen thousands of mostly small-time drug pushers and users dead in police operations.

The Philippine National Police rejects allegations that the killings were executions, saying the drug peddlers and users were killed in shootouts, and that the officers were acting in self-defense.

The PNP says officers have killed more than 5,000 suspects in shootouts, but rights groups claim the toll is at least triple that and may amount to crimes against humanity.

The death of Delos Santos and the killing by Caloocan police of two other teenagers — Carl Arnaiz and Reynaldo de Guzman—two days later stirred unprecedented public outrage, forcing President Duterte, who had vowed to pardon authorities involved in his crackdown on drugs, to step back from defending the use of lethal force by lawmen.

“It was really bad. That was really not performance of duty. Do not commit a crime,” Mr. Duterte said at the time amid public condemnation of the killings, which highlighted concerns about police abuse.

The first occasion was in January last year after police narcotics officers were arrested for the kidnapping and murder of a South Korean businessman in 2016.

In both instances, however, the PNP was reinstated in the campaign, although just supporting the new spearhead, the Philippine Drug Enforcement Agency.

Police claimed Delos Santos was a drug courier who shot it out with officers during a nighttime raid in Libis Baesa.

But witnesses, security camera footage and results of forensic examination showed that the teenager was shot twice in the head and presumably in the back while on his knees.

All this made a clear case of treachery and abuse of superior strength, Azucena said.

“The time and manner of the attack were deliberately chosen and the accused was immediately cloaked with impunity to ensure execution,” he said.

Although it was clear that Oares was the one who shot Delos Santos, the three officers conspired to kill the boy, he said.

The case against the officers’ coaccused, police asset Renato Loveras, who tagged Delos Santos as a drug courier, was archived until he could be arrested and brought to court.

The conviction of the three policemen on Thursday proved allegations of EJKs in Duterte’s war on drugs, according to Sen. Risa Hontiveros.

“The court’s decision proves that EJKs under President Duterte are real, committed no less by rogue elements in the police force,” Hontiveros said in a statement.

She blamed the killings on Duterte, who, she said, “incited this culture of killing and impunity” and besmirched the image of the police.

“He can no longer deny responsibility for inflicting death and violence while he has clearly and repeatedly encouraged them,” she said.

The conviction of the three officers, however, showed that “justice is rolling,” Sotto said.

Some policemen are lying

Sen. Francis Pangilinan said the court’s decision put doubt to the invariable police claim that suspects were killed because they resisted arrest.

It showed that some members of the police force were lying, Pangilinan said.

He praised Judge Azucena for his bravery and for standing up for his principles in handing down a ruling against the police.

The senator challenged the PNP to step up its efforts in going after rogue officers.

“This is also a warning to those pushing EJKs,” Pangilinan said.

Sen. Grace Poe said she hoped the decision would “create a momentum that could help stem the tide of unexplained killings in the country.”

“This is a compelling verdict because it tells us that justice is on hand, not just for the young Kian delos Santos, but for the other dubious deaths linked to the drug war,” Poe said.

The Public Attorney’s Office (PAO), which helped in the investigation of Delos Santos’ murder, said the decision was a warning to the PNP that justice would be served in extrajudicial killings.

“This is proof that there is rule of law, truth and justice in our country. If there is indeed EJK, our government doesn’t allow it,” said Persida Acosta, chief of the PAO.

For Justice Secretary Menardo Guevarra, the decision debunked “the myth [of a] culture of impunity” in the war on drugs.

The conviction of the three policemen should not discourage law enforcers from pressing the President’s campaign against illegal drugs, he said.

The PNP has insisted that the murder of Delos Santos was not an extrajudicial killing.

“They (the three policemen) were [convicted] of murder. There is no EJK,” Durana said.

“Thank God. This is a sign that the system of justice in our country is working,” David said. —WITH REPORTS FROM LEILA B. SALAVERRIA, JEANNETTE I. ANDRADE, TINA G. SANTOS, JEROME ANING, MARICAR CINCO AND AFP