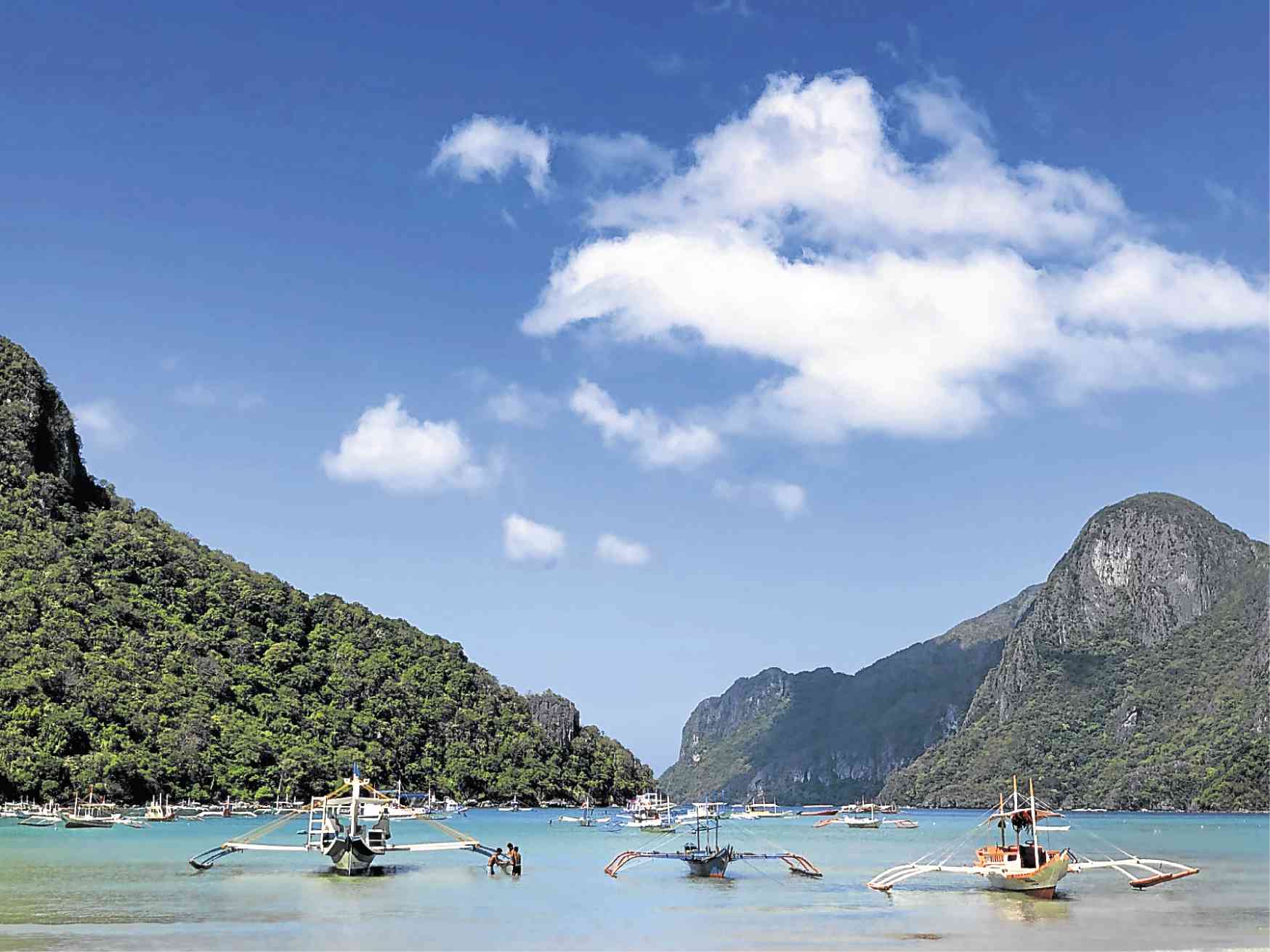 TOP ATTRACTION The government campaign to rehabilitate El Nido, Palawan’s leading tourist destination, has paid off as pollution level in the town’s waters has gone down. —MICA VELOSO/CONTRIBUTOR

Cimatu made the announcement during an inspection of the town’s main public beach in Bacuit Bay, where several buildings had been partly demolished since early this year for exceeding easement limits set by law.

“There will be no closure for El Nido similar to Boracay but we will close all establishments that are not compliant,” he said.

The government, he said, is preparing an executive order to be issued by President Rodrigo Duterte detailing the rehabilitation plan for El Nido. He said the Department of Environment and Natural Resources (DENR) would also ask the national government to allocate funds for activities that the town would need, including a plan to transfer the local port.

Cimatu was accompanied during the inspection by Tourism Secretary Berna Romulo-Puyat and Interior Secretary Eduardo Año.

“The three of us agreed that El Nido would not be closed and only those who would defy the law would be shut down … We really will not go for closure but only rehab,” Puyat said.

She said the government would make sure that thousands of tourist boats operating in the town would not spill wastewater and oil into the bay.

“You have to regulate the practices of [boat operators]. They also add to coliform pollution [here],” Puyat said.

Cimatu said he had ordered the deployment of 50 personnel from the DENR to conduct a baseline assessment of El Nido and oversee the rehabilitation effort.

Año said that unlike the situation on Boracay Island, which needed direct national government intervention, El Nido took initiatives to address its problems.

“We like to commend El Nido for taking these initiatives, unlike in Boracay where we had to go down to implement the law,” he said.

The DENR, Department of Interior and Local Government and Department of Tourism are set to develop a detailed six-month work plan for the rehabilitation of El Nido.

Cimatu said the deadline was made in consideration of the town’s schedule to complete its water treatment and sewerage project.

Cimatu said he was pleased with the clearing efforts on the main beach in Bacuit Bay undertaken by the town and the DENR since May this year. The main beach area is now accessible to tourists. 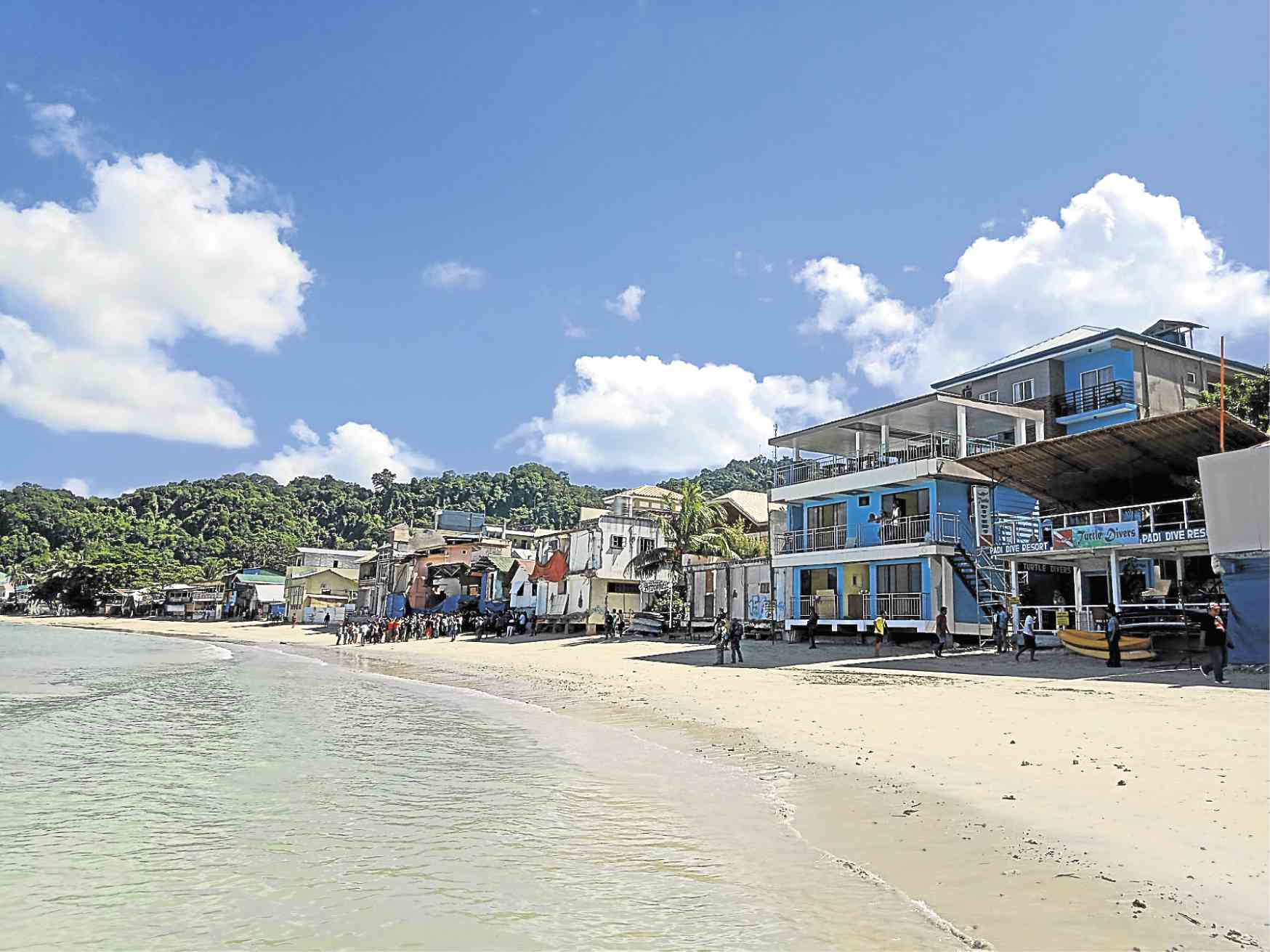 ALL CLEAR A section of the beach fronting Bacuit Bay in El Nido has been cleared of illegal structures. —MICA VELOSO/CONTRIBUTOR

Result of the latest water monitoring by the DENR showed that except in one area of Bacuit Bay fronting the town center, all other test sites showed safe pollution levels.

“This is what I’ve been saying. Even with a little effort, gumaganda na ang lugar (the area has been improving). What more if you will be totally compliant?” Cimatu told Mayor Nieves Rosento.

Rosento said local officials were confident of completing the cleanup within the deadline set by the DENR.

Vice Mayor Leonor Corral said the El Nido government had started implementing a carrying capacity limit in the main destinations of the town, particularly in the karst-enclosed lagoons.

While there had previously been no control over access of tourist boats to places like Big Lagoon and Small Lagoon, Corral said they were now limiting entry of kayaks in these areas. Only 60 people are allowed in Big Lagoon while only 30 people can enter Small Lagoon at any given time.

Owners of establishments affected by the government’s crackdown welcomed the rehabilitation, but some expressed doubts that regulations were strictly being enforced.

Mary Jane Ramirez, owner of Jarace Grill, a building that was partly demolished to comply with the easement regulation of 3 meters from the high tide line, said she was hoping to recover now that tourists were returning.

“We are doing our best to comply. We know that in the long run, this is also for us,” she told the Inquirer.

But Samy Benzaia, a French national who owns Submariner Diving Center in the town, said: “The plan looks good on paper but the execution is somewhat difficult.”

“Some establishments [will stop operation] but after several days, they are back again. Sometimes if they are full, [septic tanks overflow] and [sewage] still goes out to the sea,” Benzaia added. —With a report from Shane Montecillo