Bishop answers Duterte: ‘No to drugs, yes to vitamins’ 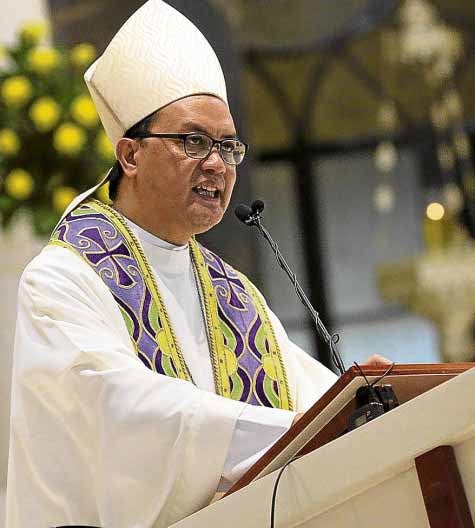 COUNTERING DUTERTE Caloocan Bishop Pablo Virgilio David: “Thank God I am not even taking any maintenance drugs yet.”

Soon after President Rodrigo Duterte insinuated he was into drugs, Caloocan Bishop Pablo Virgilio David on Monday night took to Facebook to correct the President.

“Thank God I am not even taking any maintenance drugs yet. I only take vitamins with fruit shake blended with malunggay (moringa) in the morning. You might want to try it, Sir. It will do you a lot of good. God bless you,” said the 59-year-old David.

The President made a reference to the bishop, a vocal critic of the war on drugs, in a rambling speech at the groundbreaking of a water supply project of Apo Agua Infrastructura Inc. in Davao City on Monday night.

“David! I’m beginning to suspect why you’re frequently roaming around at night. You could be into drugs,” the President said in a fresh attack on a member of the clergy critical of the brutal crackdown on drugs that had claimed the lives of thousands of people.

David, vice president of the Catholic Bishops Conference of the Philippines, didn’t take this sitting down.

“Into drugs? No Sir, I’m not into drugs of any sort, whether legal or illegal. Never been,” he wrote on Facebook later that night.

If at all, the bishop said he was only involved in the rehabilitation of drug addicts in partnership with the antidrug abuse councils of Caloocan, Malabon and Navotas, suburbs on the northern part of the metropolis where some of the killings of drug suspects had taken place.

In the same speech, the President threatened to have the head of a bishop cut off if he was found to be buying drugs, without naming anyone in particular.

While talking of climate change, he also assailed David and the Catholic Church for clinging to an “archaic faith.”

According to the Presidnet, Filipinos need not go to church to pray, but should instead build a chapel at home.

“You build your own chapel in your own house and pray there. You don’t have to go to church to pay for these idiots,” he said.

Santos urged the President to respect freedom of religion.

“Even our God is so understanding and compassionate. Our God respects our free will and decision,” he said. “Anyone who even holds the highest position in the land should never play God.”

Manila Auxiliary Bishop Broderick Pabillo called out the President for “not respecting the Constitution’s mandate of separation of Church and State.”

“He should be facing the problems of the country, like poverty, the rising prices of commodities and the suspicious agreement of our government with China instead of talking about things that don’t have anything to do with his administration,” he said.

Otherwise, it would be wise for Filipinos to simply ignore the President’s remarks, said Sorsogon Bishop Arturo Bastes.

“Every Filipino with the right mind should only ignore this nonsense,” Bastes told reporters. “I don’t want to comment on this crazy idea. I am tired of his stupid remarks.”

In the face of the President’s attacks, Sen. Bam Aquino urged Catholics and Christians to be ready to defend their faith.

“If they see something they don’t like, they should be ready to defend their faith,” he added. —With a report from Leila B. Salaverria