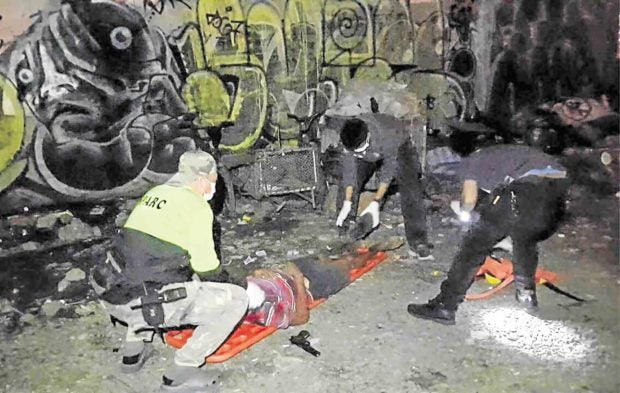 SAN PEDRO CITY — A new round of simultaneous police operations left 11 people, most of them suspected to be involved in the illegal drug trade, dead over the last 48 hours on Monday and Tuesday in Laguna province.

But Senior Supt. Eleazar Matta, Laguna police director, said the number of fatalities was insignificant compared to the 187 people arrested for various offenses during the same period.

Sacleo was a police campaign that replaced “Oplan Galugad” (search) and “One Time-Big Time” operations. Police carry out buy-bust operations and serve search and arrest warrants simultaneously across the province.

Earlier this month, 12 crime suspects were also killed in Laguna during a 24-hour operation.

The campaign had reduced by half the province’s weekly crime volume to only 10 as recorded last week, Matta said.

Police reports showed that three drug suspects were killed in two separate buy-bust operations at Barangay Canlalay and Sto. Niño in Biñan City at 1:30 a.m. and 3:15 a.m. on Tuesday, respectively.

Also on Tuesday in Lumban town, a suspect, Francisco Padua alias Kid, was killed in a drug bust shortly after midnight at Barangay Balimbingan.

Padua was on the police watch list for suspected drug users. Recovered from him was a .38-caliber gun, police said.

In Kalayaan town, a suspect, identified only as Mike, was killed at 10:45 p.m. on Monday at Barangay Longos. The suspect reportedly shot an undercover agent, PO1 Mark Anthony Espiritu, when he realized it was a sting operation.

In Cavinti town, a suspect, identified only as Edwin, was killed in a buy-bust operation on the national highway at Barangay Lumot at 10:50 p.m. on Monday.

In this city, a jeepney driver, Rodante Aragao, was killed in a drug bust at Barangay Landayan on Monday morning.

In Calamba City, Raul Alex was killed in a drug bust at Barangay San Cristobal at 2:30 a.m. on Monday, while a suspect, Roberto Paredes, was killed at Barangay Pooc in Sta. Rosa City at 11 p.m. on Sunday. Paredes was also included in the police watch list for illegal drug pushers.

In Cabuyao City, two men were killed when the police acted on a tip on a group of robbery suspects at Barangay Mamatid on Monday morning.

When the policemen approached, the suspects allegedly opened fire, forcing the lawmen to shoot back and kill them. —Maricar Cinco