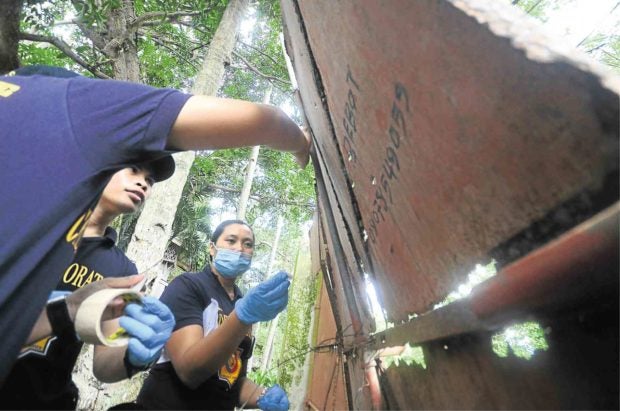 CLASH SITE Investigators mark bullet holes on the gate of a beach resort in Davao City after a clash between government troops and suspected rebels.
—ARJOY CENIZA

DAVAO CITY — All police station commanders in Davao del Sur province have been ordered to tighten security after policemen and soldiers engaged suspected communist rebels in a firefight at Talomo District here on Monday.

Morales said the rebels belonged to the NPA Special Partisan Unit (Sparu) staying at the now abandoned Victorio Beach Resort. The group, he said, could be planning to stage “special missions,” such as assassination and extortion, in the city.

Reports said no one was wounded in the clash that broke out after government troops raided the resort to arrest Ka Jeffrey, the commander of the NPA’s Pulang Bagani (Red Warrior) Company 1.

The rebel leader has a warrant of arrest for two counts of murder, serious illegal detention, robbery in band and attempted murder.

“The operation involved the search of four houses within the compound and we were able to recover rifles, pistols and IED (improvised explosive device) components,” Morales said.

Morales said the rebels fired the first shot and lobbed grenades, prompting policemen and soldiers to fight back.

He suspected that the armed men were members of the same group that clashed with the police last month at Barangay Langub and could be part of a supposed plot to oust President Rodrigo Duterte.

Police held the resort’s caretaker and questioned him for his possible knowledge about the subjects of the operation.

Morales also denied reports spreading on social media that the armed men were members of the Islamic State-inspired Maute Group.

He said the rebels slipped through the nearby slum area.

“The community noticed very suspicious persons [at the old resort]. Sometimes, they left on motorcycles while some did not come out of the compound for several days … They reported this to the police and we conducted surveillance to verify the [information],” he said.

In Masbate province, five NPA rebels and at least 100 rebel supporters surrendered to the military on Monday.

Pramis said they would undergo processing for the government’s Comprehensive Local Integration Program, which gives financial and livelihood assistance to rebel returnees. —WITH A REPORT FROM MAR S. ARGUELLES