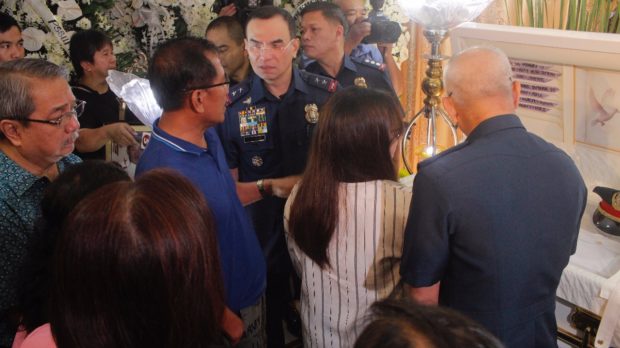 The father of Senior Inspector Manuel Tatayon Jr., who was slain in an operation last Sunday, asked the Philippine National Police (PNP) leadership to investigate a possible foul play after autopsy reports found that the officer was shot in the back.

Manuel Tatayon Sr. said on Tuesday that his son, who was the chief of the Pasay Police Intelligence Department, relayed prior to his death qualms about an “old” officer who refused to join him in operations.

The intel officer apparently received a report that Narc Delemios, who escaped a jail facility, was hiding inside the Don Carlos Revilla Village in Barangay 148 in Pasay City.

Delemios was the main suspect for the killing of a Grab driver back in October 2017.  He apparently killed Tatayon, who despite being hit still managed to fire back.  Delemios was eventually killed afterwards.

Both explained to the family that according to PNP Crime Laboratory Office (CLO), the two fatal wounds at the back of the law enforcer was inflicted by the man who was the target of the operation.

An authority from the PNP Crime Laboratory noted that the slug found inside the slain officer’s body belonged to Delemios’ gun.

However. Tatayon still asked for substantial evidence, especially after it was revealed that there are still two bullets inside his son’s body, yet to be recovered because it would supposedly disfigure the body.  The CLO official said that there is no point in retrieving the bullets because it did not lead to his death.

But if the family will ask for it, the PNP crime lab personnel will retrieve the remaining bullets.

He also dispelled talks that his son’s firearm was jammed, which made him defenseless against the suspect.

Tatayon Sr. said that he would ask the CLO to re-examine the body of his son.