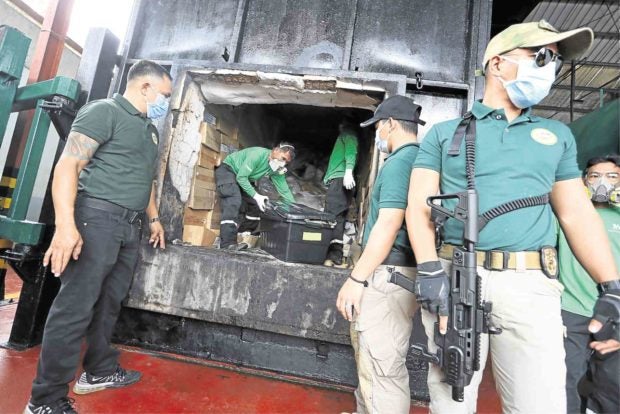 DESTROYING EVIL The Philippine Drug Enforcement Agency is at the forefront of the war on drugs and in charge of operations like this in Trece Martires City, Cavite province, which led to the destruction of P10.4 billion worth of drugs, chemicals and equipment. INQUIRER file photo / NIÑO JESUS ORBETA

Almost 5,000 have been killed in anti-drug operations launched by government authorities since July 2016 up to October 2018 as the Duterte administration continues to intensify its drive against illegal drugs, government data showed.

A report from the Philippine Drug Enforcement Agency (PDEA) released Tuesday said 4,999 drug personalities died while 161,584 were arrested during the period. The report covers the date after President Rodrigo Duterte took his oath on June 30, 2016.

The October data also disclosed that 113, 570 anti-drug operations have been launched by the PDEA and the Philippine National Police (PNP).

PNP spokesperson Chief Supt. Benigno Durana Jr. denied that the figures from the government were so much lower than the almost 30,000 fatalities in the drug war estimated by some critics.

According to Durana, the supposed addition in the death toll are “normal, regular homicide cases under investigation” and “not in a way related to drug operations.”

But he said that around 2,000 from this number are somehow related to the problem on drugs. He said some were caused by killings committed by drug suspects against each other.

Nevertheless, he said the supposed 30,000 deaths claimed by critics is “too much of a stretch” and is only “propaganda.”

“The facts will not lie but some will insist on lying on these figures,” he said.