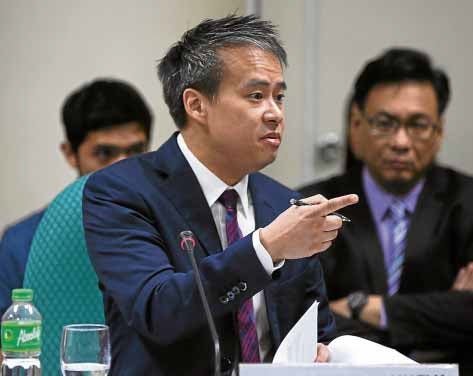 Tens of thousands of Chinese from mainland China have been entering the Philippines as tourists before obtaining short-term special permits to work in online gambling operations, a Senate panel learned on Monday.

At a hearing of the Senate labor committee, Sen. Joel Villanueva expressed alarm and indignation after immigration and labor authorities admitted that more than 119,000 “tourists,” most of them from mainland China, were able to skirt labor regulations to gain temporary employment in the country.

These tourist visa holders technically remain tourists even during the three-to-six-month duration of their work assignment in the country.

Thus, their employers need not prove that the jobs cannot otherwise be performed by locals, which is the usual policy for alien workers.

“It’s very clear. Chinese nationals have been stealing our jobs, taking away our homes and pilfering opportunities from Filipinos,” Villanueva said.

He called for stringent regulation of foreign workers in the country.

The Senate panel is looking into the proliferation of presumed illegal workers from China, whose numbers have risen around Metro Manila to a degree that do not match official employment numbers from the Department of Labor and Employment (Dole).

Dole figures show that since 2015, close to 116,000 foreigners have been issued an alien employment permit (AEP), which allows them to work legally in the Philippines.

An AEP will be issued by Dole only if there is no Filipino willing or competent enough to do the job being offered to a foreigner.

The permit is one of the major requirements for the issuance of a work visa for aliens, but officials acknowledge that virtually all AEP holders have been able to get work visas.

Chinese nationals account for the bulk of foreign workers holding AEPs, numbering almost 52,000, or about 45 percent of the total, mostly working in manufacturing, information and communications, and administrative and support services.

But Labor Undersecretary Ciriaco Lagunzad III told the Senate committee that there was another way the Chinese had been able to gain employment even without an AEP by obtaining special work permits from the Bureau of Immigration.

“This is beyond AEP … because it is intended for short-term assignments for six months … or three months extendible by another three months,” he said.

Lagunzad explained that the status of these permit holders remained tourists. “Is this covered by an AEP? The answer is no,” he said.

He said there were more than 119,000 of such permits issued by the immigration bureau from 2017 to 2018. But the actual number could be bigger, considering some 1.6 million tourist visas were issued to Chinese citizens in 2018 alone by the Department of Foreign Affairs, and only 18 preemployment visas.

Demand for offices and housing by the Chinese workers has buoyed the real estate market in Metro Manila, pushing rents up in many condominium buildings.

Reports of unruly behavior of these workers in residential buildings also have been increasing.

Homer Arellano, head of the immigration bureau’s Prosecution and Legal Assistance Section, said the special work permits were typically granted to foreign basketball players to play in the local league and to international entertainers holding a concert.

But when Villanueva noted that there couldn’t be 119,000 of such type of workers, Arellano said: “Most of them are Chinese and they work in firms run by Pogos (Philippine offshore gaming operators).”

To which Sen. Grace Poe reacted: “Shouldn’t that be a red flag to us? They shouldn’t enter here under false pretenses.”

Poe also wondered if immigration authorities had kept track of these permit holders’ background and whether they had any criminal record in their home countries.

Arellano said one factor that put Filipinos at a disadvantage with the Chinese for this type of job was lack of fluency in speaking Mandarin.

This prompted Poe to retort that Filipinos could be hired as understudies to learn from the Chinese in Pogo jobs.

Villanueva followed up by suggesting that language skills training of Tesda (Technical Education and Skills Development Authority) focus on teaching Mandarin to Filipinos.

Speaking to reporters after the hearing, Villanueva said it was not his intention to spread anti-Chinese sentiment but only to make sure that Filipino jobs were protected.

“It is unfortunate but we’re not trying to single out any nationality, but we’re talking of illegal workers stealing jobs from Filipinos,” he said.