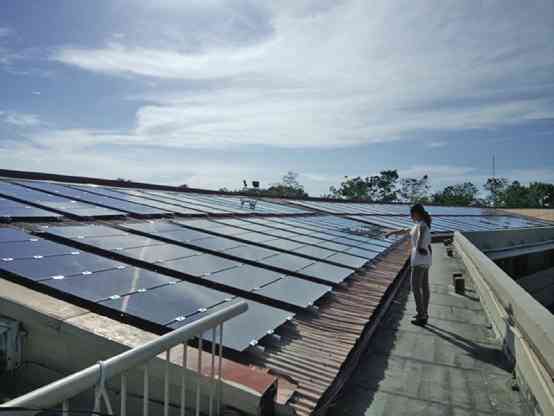 AN EMPLOYEE of Holy Name University in Tagbilaran City checks the 1,100 solar thin-film panels installed on the school’s rooftop. HNU is the first academic institution to fully integrate solar-power energy system in Bohol province and the Visayas. LEO UDTOHAN/INQUIRER VISAYAS

Senator Grace Poe is pushing for the passage of a measure that seeks to cut the cost of household and business electricity bills through the use of rooftop solar technology.

Poe’s Senate Bill No. 1719 will promote the adoption of rooftop solar technology by residential, commercial, industrial and government end-users.

According to Poe, her proposed law aims to address institutional barriers to the adoption of rooftop solar energy as well as support its development nationwide.

“Rooftop solar is an emerging technology, which the government should look into especially as it’s becoming cheaper by the day,” Poe said in a statement on Monday.

The senator noted that in 2014, then-Energy Secretary Jericho Petilla said electricity from solar panels directly installed on a house’s rooftop only costs P9 per kilowatt hour, cheaper than the P12 per kilowatt hour of energy sourced from coal fire power plant.

“Unlike other power plants, whether fossil-based, hydro, wind or solar farms, rooftop solar does not require land conversions because it uses what is usually an underutilized and already existing resource—the roof,” she said.

“Complete solar photovoltaic systems or solar technology can be bought off-the-shelf and could be easily installed in a few hours. Larger systems may take a few days. No other technology, renewable or otherwise, could match the convenient installation attributed to rooftop solar,” she added.

Poe believed emergence of solar technology was an increasingly affordable and feasible method of complementing the electricity needs of residential and commercial end-users, as it was also seen to reduce overall demand especially during peak hours often between 12 noon to 2 p.m. when the sun is at its hottest.

Poe especially noted that PAG-IBIG Fund has already introduced a solar panel acquisition or installation loan in 2015, which could help homeowners shift to solar energy technology.

Aside from households and business, the senator’s bill will compel government agencies to install solar energy system in their respective offices and building to supply at least five percent of their electric power requirements and which shall increase by five percent every five years.

Other proposals of Poe under Senate Bill No. 1719 include:

The proposed measure is currently being tackled by the Senate Committee on Energy, chaired by Senator Sherwin Gatchalian. /kga