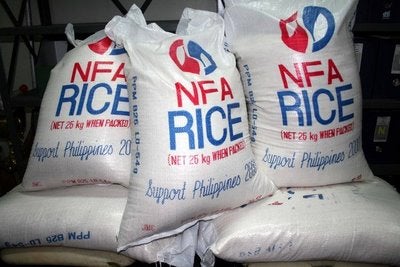 About 400 employees of the National Food Authority (NFA) would be “directly affected” if the rice tariffication bill is enacted into law.

NFA officer-in-charge Tomas Escarez gave this estimate during a budget hearing in the Senate on Monday.

It was Senator Francis “Kiko” Pangilinan, who asked during the hearing, how the abolition of the agency’s regulatory functions would affect its operations, particularly its employees.

“You have to go through an entire reengineering and retrenchment, is that a natural part of the process because you are no longer attending to the regulatory functions…?” Pangilinan said.

At present, Escarez said the NFA had at least 4,200 employees and about 400 of them were involved in the regulatory.

“They will be directly affected?” Pangilinan asked again to which Escarez answered yes.

Senator Cynthia Villar, who chairs both the Senate committees on agrarian reform, and agriculture and food, has given the assurance that the enactment of the rice tariffication bill would not result in the abolition of the NFA.

“Walang provision ang rice tariffication on the abolition of NFA,” Villar told reporters after the hearing.

Pangilinan, in a text message, explained that the passage of the bill would abolish the NFA’s regulatory functions “over the local rice industry including rice traders, retailers and the issuance of permits for warehousing, transportation and importation of rice.”

The measure, which seeks to replace the quantitative import restrictions on rice with tariffs, has already been approved in the bicameral conference committee and is now up for ratification by both the Senate and the House of Representatives.

Once ratified by both chambers, the bill will be sent to President Rodrigo Duterte for signing. /cbb