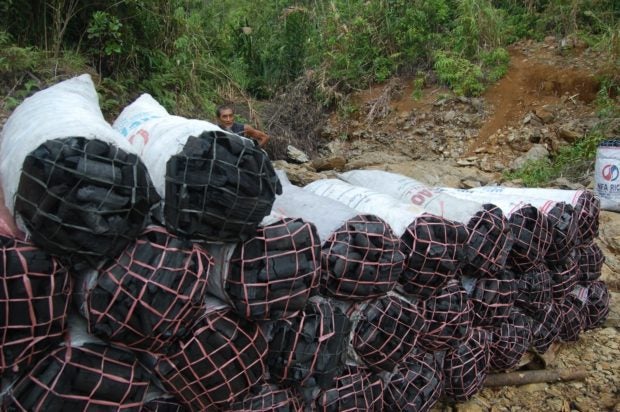 POLLUTION SOURCE Sacks of charcoal are sold at the foot of a mountain in Lagonoy, Camarines Sur. According to Vital Strategies, global public health organization, charcoal use remains an “underappreciated source of local air pollution” and just as bad as industrial and vehicular emissions. —JUAN ESCANDOR JR.

While tens of thousands of Filipinos have died from air pollution-related causes over the past few years, impoverished families continue to use charcoal, a cheap but dirty fuel.

Fernando Pasion of Makati City uses charcoal daily since it helps him stretch the family budget. Only his son earns a living for the family of five.

For only P150, the family has a supply of charcoal that could last for a week, Pasion said.

That’s P50 in savings considering that a 2.7-kilogram tank of LPG (liquefied petroleum gas) that the family sometimes uses now costs up to P200. The LPG tank also lasts a week.

Charcoal appears to be cost-efficient for poor residents like Pasion, but its use is taking a toll on the health of Filipinos and on the country’s economic prospects because it is one of the leading sources of indoor or household air pollution.

A recent World Health Organization study showed that in 2016, close to 84 deaths per 100,000 Filipinos could be attributed to indoor air pollution.

Separate data from the World Bank showed that in 2013, a total of 57,403 Filipinos prematurely died because of air pollution-related causes — up nearly 33 percent from the levels in 1990.

Due to these deaths, the country lost in 2013 alone P123 billion, more than the combined budgets of the health and social welfare departments.

The figure, which used the 2013 exchange rate of $1:P44.4, was arrived at by computing the foregone labor output, or the workers’ expected contributions to the economy if they reached the Philippines’ average life span of 70.2 years old.

This is due to the fact that charcoal use remains an “underappreciated source of local air pollution,” said global public health organization Vital Strategies.

He pointed out, though, that charcoal use was just as bad, considering the level and frequency of one’s exposure.

Various studies have shown that those who are more exposed to charcoal burning are at higher risk of developing respiratory diseases, such as chronic obstructive pulmonary disease and lung cancer.

It may also exacerbate heart diseases and make one more prone to strokes.

This is due to the pollutants, such as fine particles of PM2.5, nitrogen oxide and black carbon, which are emitted when burning charcoal, Kass said.

While street vendor Michelle, 27, said she had not fallen ill in her more than a decade of manning a barbecue stall that uses charcoal in Makati City, the same could not be said of Pasion, 59.

Apart from high cholesterol, Pasion often suffers from the common cold. And that’s on top of the eye burns he frequently gets from the smoke.

Depending on one’s age

Pasion, however, shrugged off these health issues since he said he could avail himself of free medication from City Hall.

At the same time, he does not see his use of charcoal as the cause for any of his ailments.

Air pollution expert Mazrura Sahani of National University of Malaysia explained that air pollution’s effects on one’s health may not be immediately felt depending on his or her age.

Children and the elderly are most at risk because kids have still developing bodies while older people may have already accumulated various pollutants through the years.

An average of 25 children below 5 years old and 884 people aged 70 and above died in the Philippines in 2016 due in part to exposure to solid fuels, such as charcoal, according to estimates of the University of Washington’s Institute for Health Metrics and Evaluation.

LPG instead of charcoal

Because of charcoal’s health impact, the World Bank has been promoting over the last few years the use of LPG, particularly in developing countries where charcoal use is prevalent.

But given the cost of LPG nowadays, such a push may be considered an antipoor policy, as a significant number of Filipinos live a hand-to-mouth existence.

“But I would ask a different question. Is it fair that people — by virtue of their poverty — suffer lung disease, cancer and early death just because they are poor?” Kass said. “The answer is no.”

He suggested ways that the government could help the public transition to LPG use, such as subsidizing its cost or setting up a mechanism that allows installment payments.

Such systems are already being practiced in countries like India, where charcoal use is also widespread, he said.

While LPG is a fossil fuel, it is a better option when one considers it’s “true cost,” Kass said.

“[You] may be paying less [for charcoal] but society is more than making up the difference in the cost by paying for health care and for lost life expectancy,” he said.

He added that it was “not fair and ethical” to allow hundreds of thousands of people to die each year while awaiting long-term renewable solutions, such as improved solar efficiency to be more affordable and accessible.