Dog dies after being gang-raped, mutilated by 4 alleged drug addicts 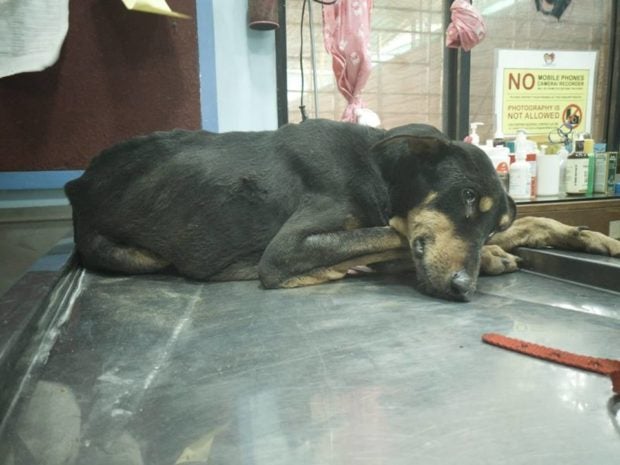 Image: Facebook/Animals Matter To Me (Mumbai)

A male dog in Mumbai, India succumbed to the injuries he sustained after being gang-raped and mutilated by four unidentified men under the influence of drugs.

The dog, Courage, passed away in his sleep on Wednesday, Nov. 21, as per a post by the animal welfare non-government organization Animals Matter To Me (AMTM) via Facebook on the same day.  The dog’s remains will be sent for a post-mortem examination.

Courage fought a lot but went in his sleep today. Malad Mumbai police team is in for panchnama & courage's remains will…

Posted by ANIMALS MATTER TO ME (MUMBAI) on Wednesday, November 21, 2018

Courage suffered from excessive bleeding and internal damage resulting from the crime, according to an earlier post by AMTM on Tuesday, Nov. 20. A First Information Report has been lodged under Section 11 of the Prevention of Cruelty to Animals Act, 1960 at the Malwani police station. The authorities have since launched a manhunt for the suspects.

One local resident, Sudha Fernandes, saw the bleeding dog in great pain, with its penis mutilated, on Nov. 17 at 12 p.m., as reported by The Asian Age on Nov. 20. An auto rickshaw driver told her that Courage was gang-raped by four men who were under the influence of drugs on the same day at 2 a.m.

“He told me that the dog needed to be immediately admitted,” Fernandes said in the report. “The dog’s front legs were tied and its mouth gagged while it was sexually tortured. Its loud screams alerted the driver, but the accused fled from the spot.”

Courage then disappeared after Fernandes tried to get ahold of him, the report stated. She found him a day after near a temple. The dog was later sent to a veterinary clinic with the help of AMTM to get stabilized.

Aside from the suspects, the police are also on the lookout for the auto rickshaw driver. JB

Read Next
Women’s fight for toilets in rural Pakistan
EDITORS' PICK
DOH: 28,471 new COVID-19 cases in PH; active cases now 284,458
On Day 2 of implementation, gov’t says workers now exempt from ‘no vax, no ride’ policy
Over 3 Million worth of prizes to be won at Smart Padala’s SENDali Manalo Promo!
Acer starts the year off strong with the Aspire Vero National Geographic Edition
Metro Manila posts lowest temperature yet this ‘amihan’ season at 19°C
Gear up and get ready to play with Yamaha Mio Gear
MOST READ
Lucky plants to grow in 2022
Derek Ramsay on being married to Ellen Adarna: ‘Gumaan ‘yung mundo ko’
Cristalle Belo on raising her kids in Australia: ‘We set limits’
Unvaccinated has rights but also has limits—DOJ
Don't miss out on the latest news and information.