It’s a stalemate for DOJ, Trillanes at Makati court 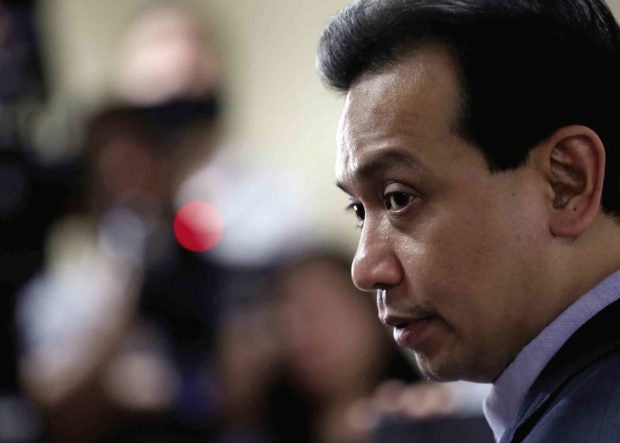 FAVORITE TARGET Sen. Antonio Trillanes IV at a press briefing in September where he announced he would stay in the Senate to counter threats hewould be arrested on orders
of President Duterte.—RICHARD A. REYES

The Department of Justice (DOJ) and the camp of Sen. Antonio Trillanes IV have reached a stalemate after a Makati court denied their appeals on last month’s ruling on the long-dismissed coup d’etat case against the lawmaker.

Judge Andres Soriano, of Makati Regional Trial Court Branch 148, denied the motions for partial reconsideration filed by the DOJ and Trillanes’ lawyer, affirming the victories that each camp won in his Oct. 22 ruling.

“The court has thoroughly reviewed all the evidence and pleadings presented and submitted by the parties, and it finds no reason to reverse or modify its findings, both factual and legal,” wrote Soriano in his one-page order dated Nov. 22.

It was Soriano who junked the DOJ’s motion to arrest Trillanes and revive the coup case against him after President Rodrigo Duterte issued Proclamation No. 572 on Aug. 31, which voided the amnesty granted to the former mutineer.

The judge recognized that the senator, indeed, filed his amnesty application in January 2011 and admitted guilt for his involvement in the 2003 Oakwood mutiny and 2007 Manila Peninsula siege.

Soriano ruled that the case against Trillanes had already been dismissed by the court back in 2011 when the amnesty granted by then President Benigno Aquino III, through Proclamation No. 75, had become final and executory.

While it was highly favorable for Trillanes, Soriano also ruled, however, that President Duterte’s proclamation declaring the amnesty void was “purely an executive act” that was within the power of the President.

It was this part of the court’s decision that DOJ prosecutors had used to justify their appeal for Trillanes to be ordered arrested, insisting on the legality of the President’s Proclamation No. 572.

The camp of Trillanes, through lawyer Reynaldo Robles, asked Soriano to reverse his decision and declare the President’s proclamation illegal.

Robles, in his pleading, said the President’s move “constitutes undue usurpation of judicial power” and was “tantamount to a total and complete surrender of the independence of the judiciary.”

“A perusal of the respective motions… show that they are mere rehash of the issues and arguments which have already been exhaustively threshed out, passed upon and discussed in the assailed order,” Soriano said in his latest order.

Asked for his next course of action, Justice Secretary Menard Guevarra told reporters he would refer the matter to Solicitor General Jose Calida.

The President had pointed to Calida as the brains of the proclamation that voided Trillanes’ amnesty.